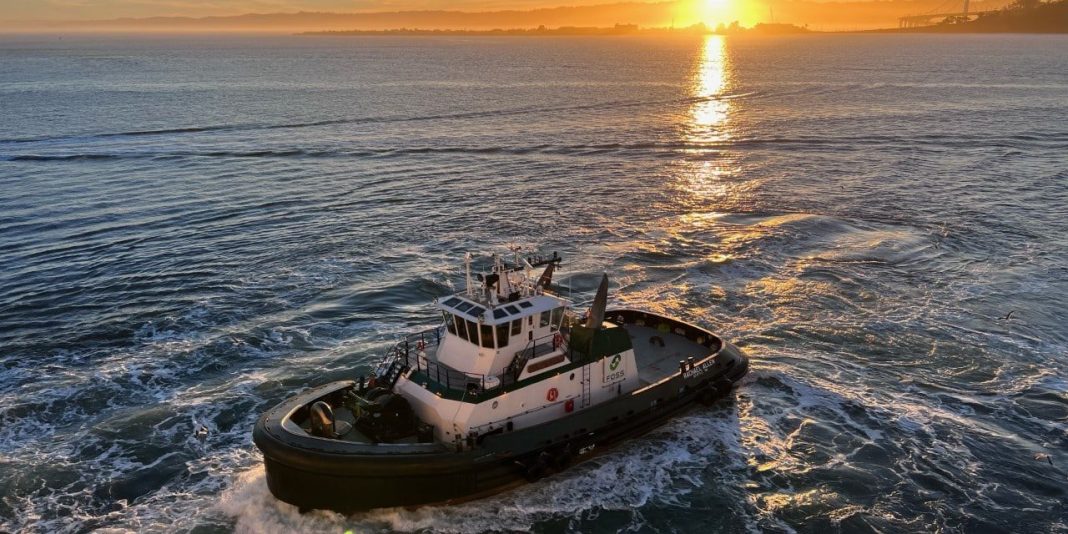 Sea Machines Robotics’ SM300 system aboard the Foss Maritime Company tug Rachael Allen has achieved a key milestone. The American Bureau of Shipping (ABS) verified the design of the Foss harbor tug outfitted with the Sea Machines SM300 autonomy system. This follows the established process of new technology qualification, document evaluation in accordance with ABS Rules and Guides, a successful product review and shows that Sea Machines’ technology conforms with ABS’ requirements addressing use aboard.

Rachael Allen will first leverage the Sea Machines’ autonomy system for routine transit and stand-by operations, and then trial remote piloting from a shore-based command center. The SM300 transit autonomy and station keeping are provided by interfacing with the Kongsberg-MTU propulsion system controls.

Sea Machines has previously earned full approval from ABS for its SM200 commercial wireless helm for installation aboard a class of U.S.-flag tugboats that support articulated tug-barge (ATB) sets.

The SM300 installed on Rachael Allen is the result of close collaboration between three U.S.- based companies: Sea Machines, Foss and ABS. This cooperation by a software company, marine transportation provider and classification society highlights the importance of interdisciplinary collaboration in bringing emerging technology solutions into commercial operations and enhancing productivity and safety by addressing issues like crew fatigue during long transits or idle periods.

“Sea Machines worked closely alongside ABS and FOSS to yield this most recent approval, which moves our entire industry yet another step closer to widespread adoption of autonomous marine technologies,” said Michael G. Johnson, CEO of Sea Machines. “Earning this approval demonstrates our unwavering commitment to ensuring that these technologies are utilized safely, while making our industries more competitive and productive.”

“As part of our ‘Always Safe, Always Ready’ culture, Foss is pleased to be providing the SM300 system for additional crew and vessel safety through the enhanced situational awareness it will bring to our operations,” said FOSS’ Dan Cole, Foss project manager.

“Autonomous technology continues to advance at pace and ABS is committed to supporting its introduction to the industry. That’s why we are proud to support the FOSS tug equipped with Sea Machines’ SM300 system and work with industry leaders all over the world on the approval of this technology,” said ABS’s Gareth Burton, vice president of technology.

Rachael Allen is deployed to Foss Maritime, in California, where it provides tanker escort and ship assists for Foss’ customers.

The SM300 is the flagship of Sea Machines’ SM Series of products, which provide marine operators an array of autonomous and captain-assistance capabilities. The products are available for sale and installation in new builds or retrofits for a wide variety of applications, including maritime transportation and support, such as fast support vessels and OSV’s, which also spend significant time at sea transiting and loitering.

Sea Machines plans to continue its engineering development and working with ABS for design review of the SM300 in the coming months.
​​​​​
​​​​About Sea Machines
Headquartered in the global tech hub of Boston and operating globally, Sea Machines is the leader in pioneering autonomous command and control and advanced perception systems for the marine industries. Founded in 2015, the company builds autonomous vessel software and systems, which increases the safety, efficiency, and performance of ships, workboats, and commercial passenger vessels. Learn more about Sea Machines at www.sea-machines.com.

About Foss Maritime
Founded in 1889, Seattle-based Foss Maritime offers a complete range of maritime services and project management to customers across the Pacific Rim, Europe, South America, and around the globe. Foss has one of the largest fleets of tugs and barges on the American West Coast. The company has harbor services and transportation operations in all major U.S. West Coast ports, including the Columbia and Snake River system, Hawaii, and Alaska. Foss offers worldwide marine transportation, emphasizing safety, environmental responsibility, and high-quality service. See www.foss.com for more information.

About ABS
ABS, a leading global provider of classification and technical advisory services to the marine and offshore industries, is committed to setting standards for safety and excellence in design and construction. Focused on safe and practical application of advanced technologies and digital solutions, ABS works with clients to develop accurate and cost-effective compliance, optimized performance and operational efficiency for marine and offshore assets. A copy of the “ABS Guide for Autonomous and Remote-Control Functions” can be downloaded here.