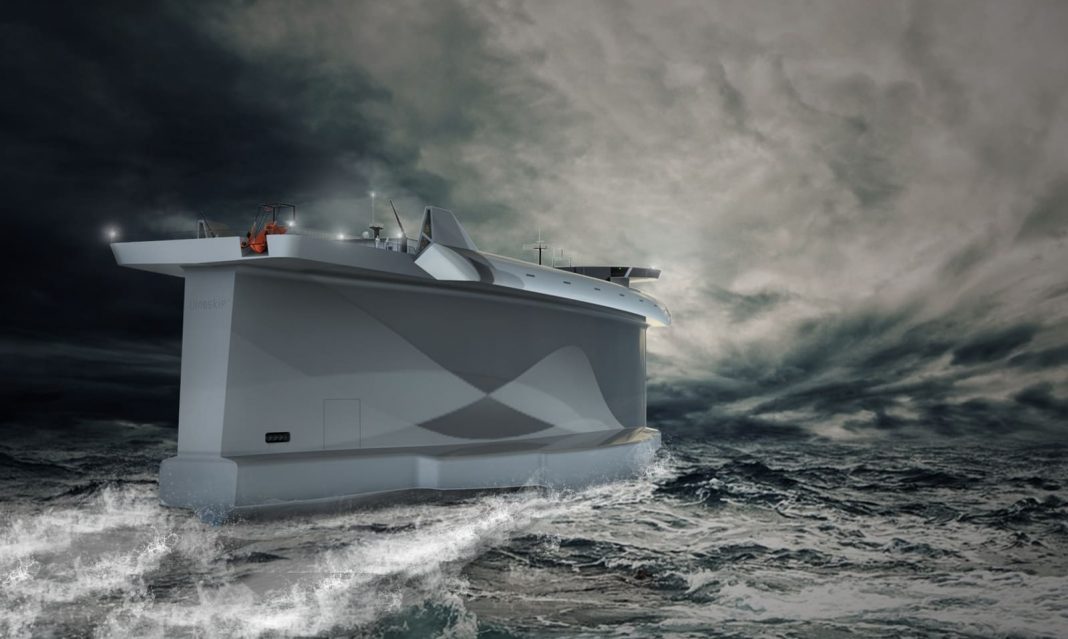 “The Vindskip® project is a groundbreaking concept, directly in line with our strategy towards a more sustainable maritime industry”, Kåre Øyvind Vassdal, CEO Brunvoll

Brunvoll has been working with Terje Lade and the Vindskip® concept since the early start, when we were asked to suggest a propulsion configuration for the project. We found the Vindskip® innovation project interesting and directly in line with our core competence in optimising propulsion systems for the actual operation profile of the vessel. The objective is thereby to achieve the lowest possible energy consumption, and sustainable operation.

What are Brunvoll supplying to this concept?

Brunvoll’s main task is to optimise the hybrid propulsion system to ensure optimum efficiency and energy consumption from the prime movers (LNG), when also considering the wind energy that affects the ship’s sailing.

The BruCon control system is told by weather routing and navigation system what is the optimal ship speed for the stretch to reach the ETA. BruCon is an intelligent propulsion control system, where the optimum propulsion efficiency depends on having the “right gear shift” relative to the propeller speed, just like when driving a car up and down hills.

Brunvoll’s control system ensures the optimum propeller blade angle and propeller speed to obtain the cheapest voyage based on a minimum energy consumption.

How does this system save fuel?

Vindskip® is a unique wind assisted concept, combining wind and a hybrid propulsion system based on electric and LNG energy sources powering the propeller via a reduction gearbox.

Vindskip® saves fuel in several ways; from utilising the wind contribution, from optimising the hybrid propulsion system and from the efficient propeller arrangement

The wind contribution leads to reduced need of power from the installed energy sources on board the ship, and thereby reduced fuel consumption. Further, the hybrid propulsion system allows for operation by the LNG-source, or the electric motor, or by a combination of the two energy sources. This gives an optimum energy consumption, depending on the actual running mode. In addition the propeller system is optimised for smooth running by custom designed propellers with fully adjustable blade angle and an integrated rudder system further increasing the propeller efficency of the ship.

It is therefore crucial to have a control system that at any condition automatically and stepless tunes the propeller blade angle and propeller speed to get the most efficient “grip” in water relative to ship speed, wind energy contribution and draft. In this way we obtain minimum fuel consumption.

What are the overall benefits to the system Brunvoll have integrated into the Vindskip®?

The Brunvoll hybrid propulsion system controlled by the intelligent BruCon control system ensures an optimum utilisation of the machinery. This gives high energy efficiency with low emissions to sea and air and ensures a sustainable voyage.

‍Why is Vindskip AS an industry pioneer that is changing the world with their designs and innovations?

Vindskip AS is an industry pioneer through the introduction of this new ship design, which fearlessly takes the lead in the development of new innovative designs. Reducing emissions and introduces a new propulsion technology that is a key challenge in the worldwide shipping.

The Vindskip®-concept consists of three parts working together in a dynamic unit;