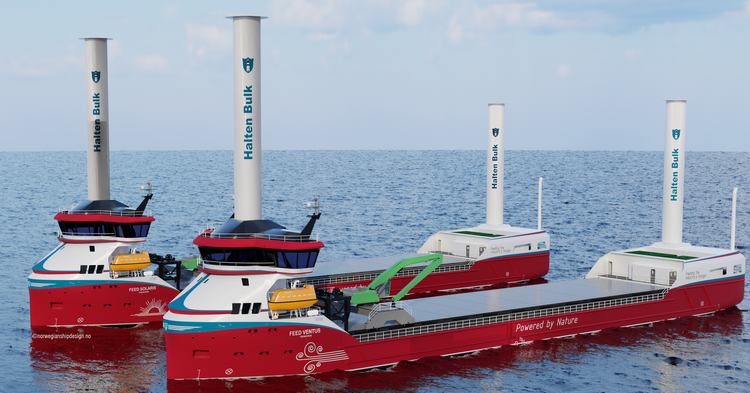 Norwegian Ship Design now has five hydrogen fuelled vessels in order, cementing its leading position in this segment. CEO in the four year old company Gjermund Johannessen says “We have since the foundation of the company had a clear ambition to be a world leader in the rapid shift towards sustainable shipping. We are extremely satisfied that we now succeed within several ship segments with our innovative and groundbreaking concepts”.

The two new vessels for Halten Bulk belong to the “Powered by Nature” concept developed in close cooperation with the innovative and leading shipowner Egil Ulvan Rederi. The vessels will derive a large part of their energy direct from nature through the two large rotorsails.

The vessels will be abt. 100 m long and have a cargo hold volume of abt. 8000 cubic meters, and they will trade along the Norwegian Coast and in the North- and Baltic Seas. The vessels will be arranged with a hydrogen fuelled engine as well as diesel generators. In a transitional period before hydrogen fuel supply is widespread in the trade area, it is expected that about 70% of the fuel required will be hydrogen and the remaining diesel oil.

ENOVA recently granted subsidies for five hydrogen fuelling stations along the Norwegian Coast, and refuelling is planned at these stations.