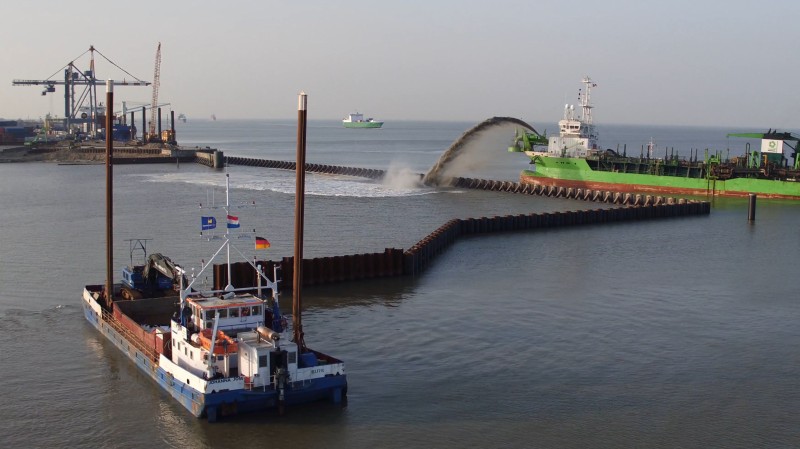 Alewijnse Marine, in collaboration with Rockwell Automation and one of the largest dredging companies in the world, has developed an innovative control concept based on a virtual platform. With this Alewijnse Virtualization & Visualization (AlViVi) platform, all dredging process-related systems on board are centralized and integrated. In addition, the systems can be visualized and operated from all screens on the ship.

“Control solutions for dredgers and other offshore installations are subject to high demands”, explains Johan van Rikxoort, product manager Dredging & Offshore at Alewijnse. “The hardware ages faster, because it is continuously exposed to vibrations and salty air. That is why the complete PC infrastructure on board a ship is usually replaced every five years. That’s not just a matter of hardware and cabling replacement. Due to the continuous development of operating systems, the user software must also be regularly upgraded and renewed. This periodic replacement is a drastic and time-consuming operation involving dozens of systems. The customer wanted to simplify and speed up the maintenance of the IT systems on board.”

Alewijnse Marine, which has been working with Rockwell Automation since 1997, presented a concept to the dredging customer at the end of 2017, which the company had already applied in a slightly different form to several industrial customers. The key characteristic of the solution is that the applications and process information are no longer locally on separate PCs on board the vessel but are virtualized on a central server. With the help of ‘zero clients’, the information and applications are made available to all roles in the work process, anywhere on the ship. The dredging company, which has one of the most modern fleets of dredgers and trailing suction hopper dredgers, was very enthusiastic about the solution. The customer remained intensively involved in the development up to the proof-of-concept test and has now successfully installed the system on several ships.

The new concept gives crew members easy access to information relevant to them, making work processes on board faster and more efficient. A key component of the concept is Rockwell Automation’s ThinManager Content Delivery Software, which replaces costly kvm switches in this solution and makes the information from both the physical and virtual server environments available to users.

A dredger has a number of specific systems to execute the primary processes. On dredgers, Alewijnse installs Draft and Loading Systems, which continuously measure and regulate loading, draft and hopper volume, and Suction Tube Systems, which calculate, monitor and control the position of the suction tube. These systems are integrated into the Dredge Control System, monitors and controls all dredging equipment and systems. In addition to these process-related functions, power systems, propulsion, and radar and navigation equipment are, of course, of crucial importance on the ship too. By centralizing all critical business information and systems and putting them on a virtual server, local PCs are no longer needed, and the information can be made accessible to every employee at every workplace.

“A new challenge that emerged during the development process was the visualization of the information,” explains Van Rikxoort. “Obviously, all information from all systems must be available on the bridge. For most other locations on the vessel, monitoring and controlling specific sub-processes and systems will suffice. It was technically difficult to operate display terminals simultaneously from a central system because the screen information is usually duplicated simultaneously on all monitors in the network. For the AlViVi platform, however, each display should be able to show information independently, while on other monitors multiple applications should be presented simultaneously.”

The concept of the AlViVi platform, as developed by Alewijnse, is quite simple in design. Instead of a series of PCs, each with their own applications, the basis of the new platform is formed by a fault tolerant virtual server. The applications run on it and it also functions as a Virtual Storage Area Network. All parts of the virtual server are duplicated. If one part of the server fails, another part takes over work immediately and without interruption.

In previous designs, a kvm switch (keyboard, video and mouse) was often chosen for operation, but for this new solution VersaView® thin clients and the ThinManager® software from Rockwell Automation were used. The content delivery system works with thin clients, which are connected one on one to the virtual server via Ethernet. This solution saves a considerable amount of hardware and cabling and is therefore cheaper to purchase. In principle, all information from the server can be offered at all workplaces, but a system of authorizations determines who has access to which information and who can carry out which activities. A different solution has been chosen for the transmission of the sonar and radar images, since virtualization of these systems is not allowed. Instead, the video output is converted into streaming video and is distributed via ThinManager to the workplaces.

Alewijnse built and extensively tested the entire installation and infrastructure for the ALViVi platform at the test center in Nijmegen in the Netherlands. “The concept in itself may be new,” says IT Team Lead Anton Evens, “but we only use components that have proven themselves in the offshore and are certified for the respective applications. Once the hardware and platform have been tested, the entire installation is packed and installed on the ship. Because ultimately fewer components must be built in, the installation is much faster compared to a traditional replacement. This delivers significant time and cost savings.”

Another big advantage of the new concept is that we work with a hardware-independent template for the configuration of the virtual server. This allows the core to be very flexibly adapted to the specific applications and work processes on a ship. Alewijnse stores a backup of each environment, so that the original configuration can be completely copied to the ship in a few minutes in an emergency. According to Van Rikxoort, this forms the basis for the next step towards a digital twin of each server. Scenarios and events can then be simulated to solve problems or test new applications. This can be an interesting option, as work ships usually do not have dedicated IT people on board.

In addition to the time savings due to the rapid development, construction and installation of the new IT systems, the enormous reduction in hardware is particularly striking. The use of a virtual server and the thin client solution reduces the amount of hardware and cabling by about 75 percent. A half server cabinet is now sufficient on the bridge instead of several 19-inch racks. Although the purchase costs for the hardware are lower, the total construction and installation of the AlViVi platform per ship is initially not much cheaper than with a traditional IT environment.

According to Van Rikxoort, the biggest savings lie in the maintenance of the systems. Less hardware obviously requires less maintenance, but since the applications are in fact disconnected from the hardware, hardware components can be replaced without having to shut down the system. When a VersaView zero client is replaced, the new Firmware is automatically downloaded and the new terminal is operational again within a few minutes. Also, the operating systems and applications are no longer dependent on the hardware, so that the software used on the platform does not have to be adjusted with every replacement of the hardware and therefore lasts longer. All software is simply copied to the new hardware environment.