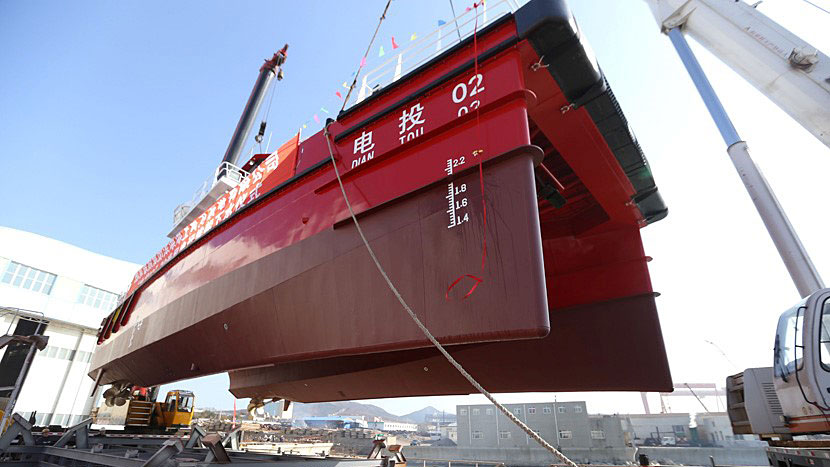 China’s star is rising in the field of new energies, including offshore windparks. The first offshore windpark in China was built in 2009 and since then, the Chinese have been thinking big when it comes to expansion of wind energy in the country. By 2019, China ranked third in offshore wind energy with 5 GW output. According to figures from the Global Wind Energy Council (GWEC), that figure had now increased to 6.8 GW.

So wind energy represents a gigantic future market in which it is worthwhile for Rolls-Royce to gain a foothold. That is because, as the number of windparks increases, so does the demand for wind park service vessels, which are absolutely essential for operation and maintenance of the huge turbine towers out at sea. These are vessels that require powerful and reliable propulsion systems to fulfil their mission.

Furthermore, since the new offshore wind parks are being built at ever greater distances from the coast, an even higher performance is needed from the vessels that serve them. And since they have a service life of some 20 to 25 years, they also need regular maintenance throughout that time to keep operation up and running. This is where the wind park service vessels come in, which bring the service engineers out to the parks, where they climb up to the turbine on a ladder. While the engineers make the transfer from ship to ladder, the vessel must stay in contact with the base of the turbine tower the whole time, however rough the sea conditions. That demands a very powerful drive. Furthermore, the bringing of personnel, spare parts, consumables and auxiliary supplies to the wind parks requires vessels that can be relied upon, however challenging the sea and weather conditions.

Rolls-Royce specializes in propulsion systems based on their compact, powerful, robust and reliable mtu marine engines that meet all these requirements. And since they boast the twin benefits of lower consumption and reduced emissions, mtu marine engines are not only highly cost-effective, but ecologically sound as well. These are the assets that Chinese shipyard Aurora shipyard was keen to gain as it opted to equip each of two new service ships with twin mtu 8V 2000 M72 units. These serve maintenance of a wind park run by State Power Investment Corp (SPIC), a large state-owned company and major player in the offshore wind energy market of Jiangsu province.

The vessels themselves – the Yifeng 02 and Dian Tou 02 – were built by the shipyard Aurora (Dalian) Yachts Co. under a license granted by Dutch shipyard Damen Shipyards Group for construction of its vessel type FCS 2008 Twin Axe Fast Crew Supplier. The 20m vessel can accommodate up to 12 engineers. Each vessel has two small engine rooms in which one engine with peripherals fits. That is why not only high output, but small dimensions and light weight are required of the engine. mtu Series 2000 units, more than any other engines on the market, tick all these boxes. With a power output of 2 x 720 kW (around 1932 hp), the vessels reach speeds as high as 25 knots (46.3 km/h).

As Richard Wang, Marine Sales Director at mtu China, points out: “In terms of criteria such as dynamic performance, acceleration capabilities, low fuel consumption and others, these engines have the edge over our competitors.”

That puts Rolls-Royce in an excellent position to meet the challenges lying ahead on the Chinese energy market.