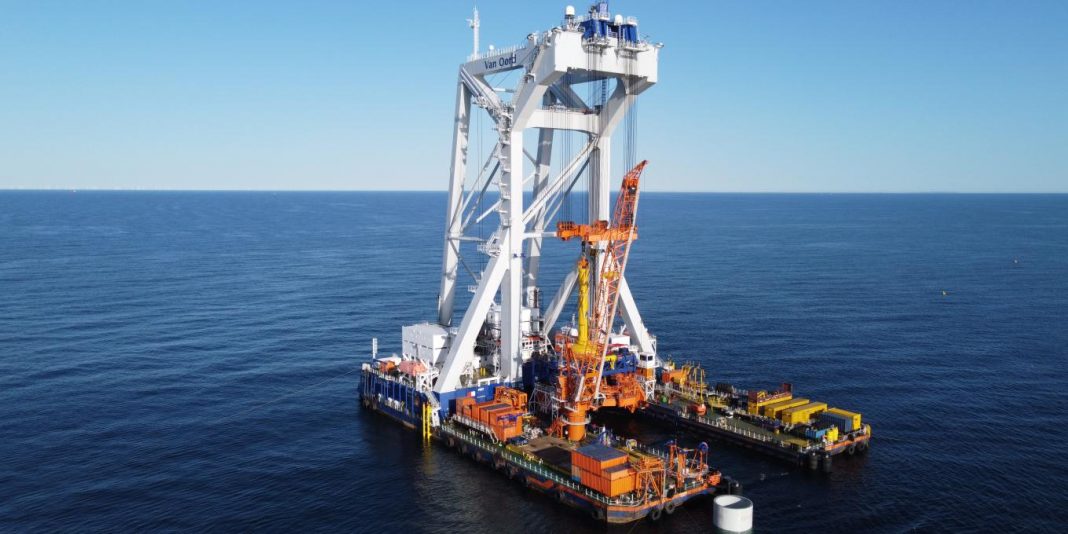 Van Oord has signed a contract with the Spanish energy company Iberdrola for the Baltic Eagle offshore wind farm. Van Oord will transport and install the foundations and ensure the supply, transport and installation of inter-array cables. With a production capacity of 476 MW, the Baltic Eagle wind farm will deliver renewable energy to 475,000 households while saving nearly 1 million tonnes of carbon dioxide annually. It is scheduled to be fully operational by the end of 2024.

‘Iberdrola is one of the leading developers contributing to the energy transition by investing in offshore wind projects around the globe – in Germany, our Baltic Hub will have an installed capacity of 826 MW by the end of 2024. Tapping into the expertise of Van Oord yet again makes us confident that Baltic Eagle offshore windfarm will be delivered as planned.’ — Iris Stempfle, Iberdola Country Manager in Germany

Svanen in the Baltic Sea

Van Oord plans to deploy its 8,000-tonne heavy-lift installation vessel Svanen to install the 50 foundations. So far, the Svanen has installed more than 700 foundations throughout Europe and the vast majority of monopiles in the Baltic Sea, including those for Baltic 2, Arkona and Kriegers Flak. The offshore works for the Baltic Eagle project will commence in 2023. Van Oord’s cable laying vessel Nexus and trencher Dig-It will be deployed to lay the inter-array cables. Van Oord will customise the Dig-It to ensure that it can handle the challenging soft soil conditions in the Baltic Sea.

We are very pleased to be working with Iberdrola again, this time on the Baltic Eagle project in the German Baltic Sea. Combining the installation of foundations and the supply and laying of cables will ensure efficient project execution.’— Arnoud Kuis, Managing Director Van Oord Offshore Wind

Offshore wind in the Baltic Sea

The Baltic Sea holds incredible potential for offshore wind in Europe. Germany and several other countries, including Poland, Sweden and Estonia, are exploring new opportunities for offshore wind there. Iberdrola’s Baltic Hub, located in the German Baltic Sea, will deliver 826 MW by late 2024. Iberdrola Renovables Deutschland GmbH is planning to increase their installed capacity in Germany to more than 1.1 GW by the end of 2026.

Van Oord has been a pioneer in the offshore energy transition. Since our initial involvement in wind farm installation in 2002, Van Oord has contributed to the installation of a cumulative renewable energy capacity of 14,45 GW. Our work ranges from transporting and installing main components to delivering turnkey projects, including engineering, procurement and construction of fully renewable energy projects. We look forward to creating new opportunities in the coming years and leading the way in the energy transition by constructing offshore wind projects such as Baltic Eagle and the Saint-Brieuc offshore wind farm in France. The order of a new green cable-laying vessel shows our drive to continuously reinforce our market position by investing in state-of-the-art sustainable technology.