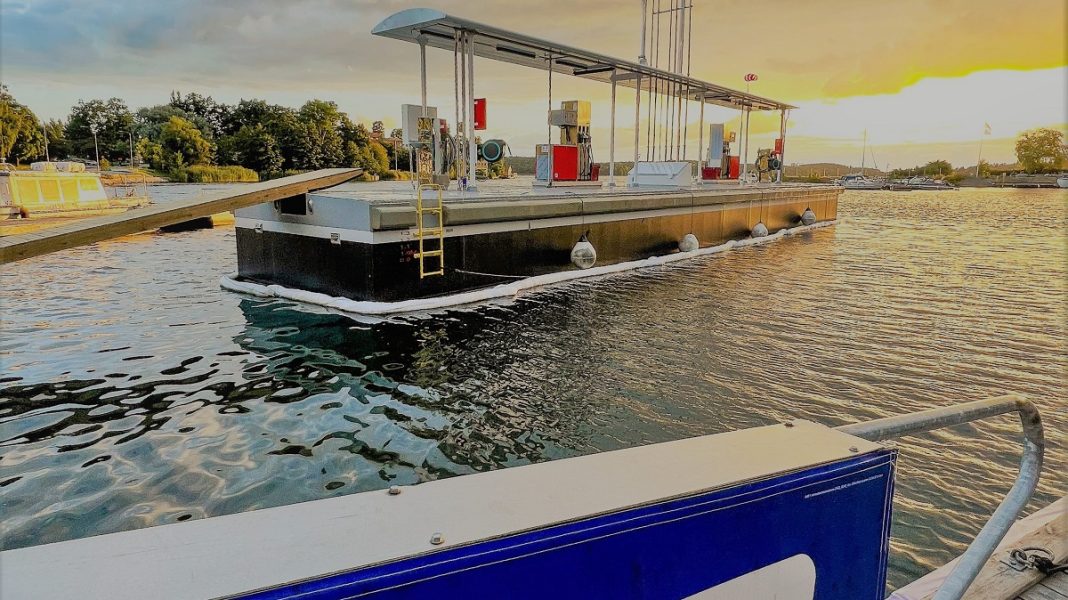 Fossil Free Marine announce that the very first unmanned mobile marine station, developed by Fossil Free Marine and built by Swede Ship Composite in Hunnebostrand, will be established in Lidingö just outside of Stockholm, and operated by leading Swedish fuel company OKQ8.

The new Fossil Free Marine unmanned mobile fuel station is a true world’s first – patent-pending, design protected, assured by the DNV (Det Norske Veritas), and compliant with the same strict environmental and safety standards as a modern unmanned station on land. It bridges the distribution gap, from suppliers of sustainable fuels to boat owners wishing to reduce their environmental impact. For the first time, boaters can now conveniently access modern drop-in renewable fuels, that can be run in any diesel or gas engine, resulting in immediate and substantial reductions in CO2 emissions (up to 90% reduction of CO2e with e.g. HVO100).

“This is obviously a massive milestone for Fossil Free Marine, as we can now show both the fuel industry as well as the marine industry what we have been working on for many years. But for us, it’s a stepping stone, as we plan to change the way fuels are distributed in the marine sector, and take part in making boating sustainable, on a global scale. We’re happy to have found a partner like OKQ8, that shares our vision of what needs to be done to make pleasure boating sustainable. Our technology is truly groundbreaking, enabling distribution of renewable fuels in large volumes, even in the most sensitive marine environments like fresh water reservoirs.”

The first unit was delivered to site, in Islinge (Lidingö) on Thursday 21/7, for installation and commencement of operations in the coming week. At Islinge, the new unmanned marine station lies directly adjacent to OKQ8’s already existing marine station, enabling both pleasure boats and commercial traffic alike to make the needed shift to renewable fuels, with a modern turn-key solution that is both economically viable, safe and environmentally friendly.

The initiative is partly funded by grants from the so called “Climate Leap” (KlimatKlivet), The grant from KlimatKlivet is for “incremental costs associated with supplying renewable fuels”, and is part of a Swedish government scheme, in support of local climate investments. In their motivation, Naturvårdsverket says that the initiative is “…among those that exhibit the highest sustainable reduction in greenhouse gas emissions per invested krona (SEK)”.

Key advantages:
• Construction is future proofed from an environmental and safety perspective, and well protected from fuel theft, with all piping securely below deck, beneath a single locked access hatch.
• Enables increasing the number of fuel qualities, allowing the operator to more closely follow changes in consumer demand, e.g offering smaller volumes of more niche fuels, such as specific biofuels, while maintaining financially viable operations.
• Complies with even the most stringent environmental safety regulations, e.g for freshwater reservoirs, and provides a future proofing for coming regulations for other sensitive marine environments.
• Increased volume capacity enables more profitable operations, due to improved logistics and lower risk of out-of-stock.
• Stays level even with varying tank volumes, thus ensuring safe operations as well as giving reassurance to end customers.
• Tanks are compatible with all types of liquid fuels, including more corrosive modern biofuels, making the product future-proofed.

Fossil Free Marine (www.fossilfreemarine.com) is a Swedish impact scale-up, committed to making boating sustainable on a global scale, through infrastructure solutions that allow financially viable, safe and environmentally friendly distribution of renewable drop-in biofuels, and marine superchargers for fast charging of future electric boats. The business model is scalable, profitable and highly impactful and can make boating sustainable, all over the world. The company was founded in 2019, has finalized its first pre-seed financing round as well as received two Swedish government investment grants from the so called “Climate Leap” (KlimatKlivet). Fossil Free Marine is a member of SPT Association (www.sptass.eu).

OKQ8 (www.okq8.se) is one of Sweden’s largest fuel companies, with 762 stations in Sweden, driven by the entire society’s transition to a sustainable future. OKQ8 invest heavily in sustainable energy supply with climate-smart electricity contracts, solar panels and high-power charging for electric vehicles.