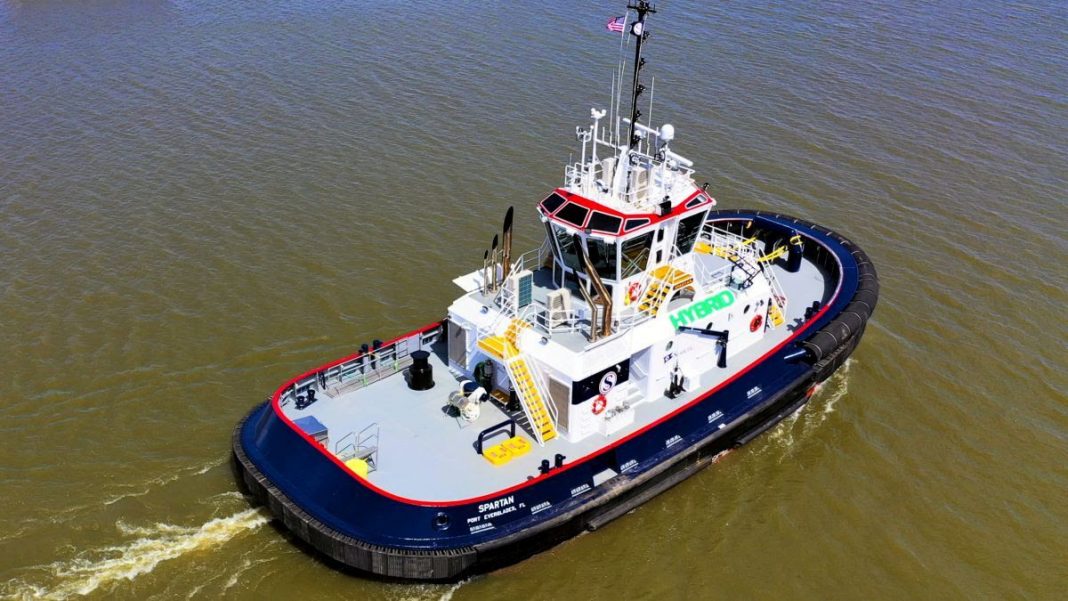 A new harbor tug delivered by one of the leading workboat builders in the United States gives form to the Berg Propulsion case that the efficiency, sustainability, and performance gains of hybrid electric propulsion are optimized for this market.

Spartan, the latest high-power tug to join the Seabulk fleet, adds to a fast-growing reference list of vessels featuring the fully integrated hybrid propulsion plant from Berg Propulsion. Already operational at Port Arthur following delivery by Master Boat Builders, the Robert Allan-designed RApport 3000 vessel is the first of two 90-ton bollard pull tugs using this latest Berg package, with the second due in service in Q3 2022.

In addition to Berg MTA 628 azimuthing thrusters, Berg VS3 variable frequency drives with motors, and its own hybrid control system, Berg’s design, supply, and integration includes the switchboard with full power management plus control of the tug’s twin Caterpillar 3512E EPA Tier 4 (2,550 hp) main engines and its gensets – two CAT C18’s and one C7.1.

Berg’s hybrid electric propulsion system includes high levels of redundancy for safety as well as the ability to switch seamlessly between operating modes with the push of a button. A vessel can run on main engines only, gensets only, or a combination of the two, optimizing energy use across the entire operating profile. A tug in transit can minimize energy consumption and eliminate main engine wear by running on a single generator set. In hybrid mode, power is balanced between the diesel engines and electrical motors to optimize fuel consumption, maneuvering response, and bollard performance.

“During the first weeks in operation, Spartan has been living up to the promises made for hybrid propulsion vessels,” said Daniel Thorogood, President and CEO, Seabulk. “Seabulk’s commitment to improving the sustainability of its operations is represented by its investment in a new generation of vessels whose flexibility is proving that hybrid tug technology is our choice for the future.”

The solution, whose installation was managed at the yard by Berg’s distributor and partner in the area, Thompson Marine, is the most advanced hybrid electric package ever delivered by Berg Propulsion.

“Thompson Marine managed the details from the earliest design phase through sea trials together with Master Boat Builders, Seabulk, Berg Propulsion, and Caterpillar” said Richard Tremayne, Marine Business Manager, Thompson Marine. “This delivery sets down a marker that – with the right team in place – the sustainability and performance benefits of advanced hybrid electric propulsion are available to all.”

“This has been a landmark delivery for Master Boat Builders in next generation tug construction, and a testament to the value of teamwork,” said Garrett Rice, President, Master Boat Builders. “The approach was collaborative throughout the design, engineering, and building phases and we look forward to completing work on the second of these innovative Seabulk tugboats later this year.”