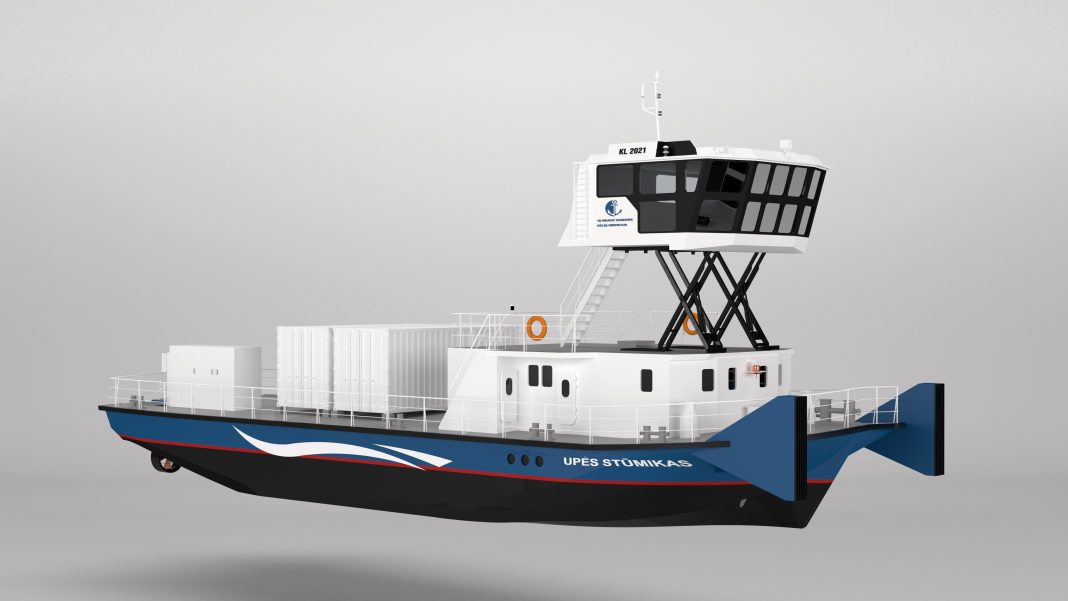 Klaipeda headquartered WBE said the agreement with Andorra based AYK Energy will see the companies collaborate on building the first electric pusher vessel, named the ELECTRIC EEL*, for the Lithuanian Inland Waterways Authority before expanding to the wider EU market.

The design partnership comes as the EU is ramping up pressure on member states to shift cargo from road to eco-friendly vessels on Europe’s extensive inland waterways network. Presently road freight, accounts for 75 per cent of inland cargo, while inland waterways account for just six per cent. EU strategies** indicate that inland waterway transport and short-sea shipping should increase by 25 per cent by 2030 and by 50 per cent by 2050.

WBE’s Head of Sales & Marketing Eglė Mikalauskienė, said the partnership with AYK Energy will supercharge its drive to roll out different models of the ground-breaking vessel for use on Europe’s inland waterways and other major markets like the United States.

“We are absolutely delighted to extend our design partnership with AYK,” she said. “We are hugely impressed by Chris Kruger and his team at AYK in how they have helped us develop the ELECTRIC EEL to date. AYK’s dedication to innovation, experience of the marine battery market and ownership of their manufacturing facility in China makes them an ideal partner to provide batteries for these vessels.”

AYK Energy president Chris Kruger said AYK is well placed to support WBE due to its unique experience of the marine battery market working on vessels including tugs, dive support vessels and ferries.

“We are thrilled to strike this design partnership with WBE,” he said. “We have been very impressed by WBE’s vision to electrify inland waterway transportation, it is long overdue and is exactly the type of project we want to work on.  The AYK team’s knowledge of the marine battery sector from R&D to installation gives us a real competitive edge. Drawing on this expertise AYK has pioneered ten different series of marine batteries which have been tested by leading integrators such as Wartsila and certified by DNV. Leading the R&D team I also bring experience of the electric car sector as well as developing the very first marine type approved battery for Corvus Energy before setting up AYK. We want to bring all that knowledge and passion to help drive WBE’s ELECTRIC EEL project.”

“Our initial design is for a low draft pusher but we are receiving lots of interest for deeper draft models as well as for vessels which can pull as well as push,” she said. “It is brilliant to see our concept capture the imagination and working with AYK we can now design alternative models, with different shape batteries and power voltage, to meet owners’ requirements.”

Mr Kruger confirmed the new partnership will focus on initially deploying its Aries + model 17.6 KW hour li-ion batteries with the potential to expand to its 23.3 KW hour Centarus & Aquarius ranges.

Mrs Mikalauskienė said the potential market is very attractive. According to figures there is a fleet of 332 diesel pushers on the Danube alone pushing more than 2000 non-propelled barges.

“We estimate each of these vessels is emitting 196,317 KGsTank To Wheel (TTW) of CO2,per navigation, while our electric pusher design slashes this at a stroke as it emits zero CO2,” she said. “The beauty of our design is also in its ease of use, it can be bought and then built at a local shipyard near the customer or we can built it in Lithuania. We believe our electric pusher can play a critical role in the drive to transform the IWT of Lithuania as well as the Danube and Rhine.”

WBE’s ELECTRIC EEL design is pending class Approval in Principle with Bureau Veritas and can operate at a range of 300km before needing to stop. The 26m long vessel is powered by three DNV approved AYK made batteries with a combined weight of 74 tonnes, two held in TEU containers on deck which can be replaced via crane at harbour, and one permanent battery below deck which can be charged at quayside. The vessel has a pushing capacity of 2000 tonnes and a top speed of 22Km/h downstream at 85 per cent engine load. The electric batteries create an engine power of 500 HP/400 KW compared to a diesel equivalent which has 1000 HP/800 KW.

Another innovation on board is the use of a wind turbine to generate 5kw of additional electricity for lighting, the galley and crew facilities.

Two recent European Commission strategies – the European Green Deal and the Sustainable and Smart Mobility Strategy –outline the steps needed to achieve an increased use of IWT with the strategy indicating that inland waterway transport and short-sea shipping should increase by 25 per cent by 2030 and by 50 per cent by 2050, presently the modal share of transport on IWT is just six per cent in the EU. However, the commission said for the transition to be viable the IWT network has to overcome important challenges and invest in modern infrastructure and greener vessels

According to Eurostat Rhine countries account for around 84 per cent of EU inland waterway transport, mainly split between the Netherlands and Germany, while Danube countries have more than 10 per cent share and all other countries taken together make up the rest.

There are 41,000 km of inland waterways flowing through 25 EU Member States transporting 150 billion tonne kilometres of cargo every year.

Western Baltic Engineering is a subsidiary to Western Shipyard in Klaipeda, Lithuania. It is one of the leading ship design and engineering service providers in the Baltic region specialising in design and technical support for ship building, offshore and maritime industry solutions. Established in 2003 it employs 100 staff.

The Western Shipyard Group is the largest employer in Western Lithuania, creating more than 2,000 jobs.  Operating for over 50 years, the group incorporates 21 companies that specialise in marine and engineering services including shipbuilding, ship repair and conversion projects, complex ship design and engineering solutions, large and complex metal construction and equipment production, and stevedoring services.

AYK was founded in 2018 by Chris Kruger with the goal of producing a low cost battery that offered superior performance and safety, that exceeds class and industry standards. Already a pioneer in the marine battery sector, having 10 years ago developed the very first marine type approved battery, Chris and his team have continued to drive development and safety in the marine battery industry. Using best practices learned over the last fifteen years, AYK has developed a solution that is superior to anything else on the market today.