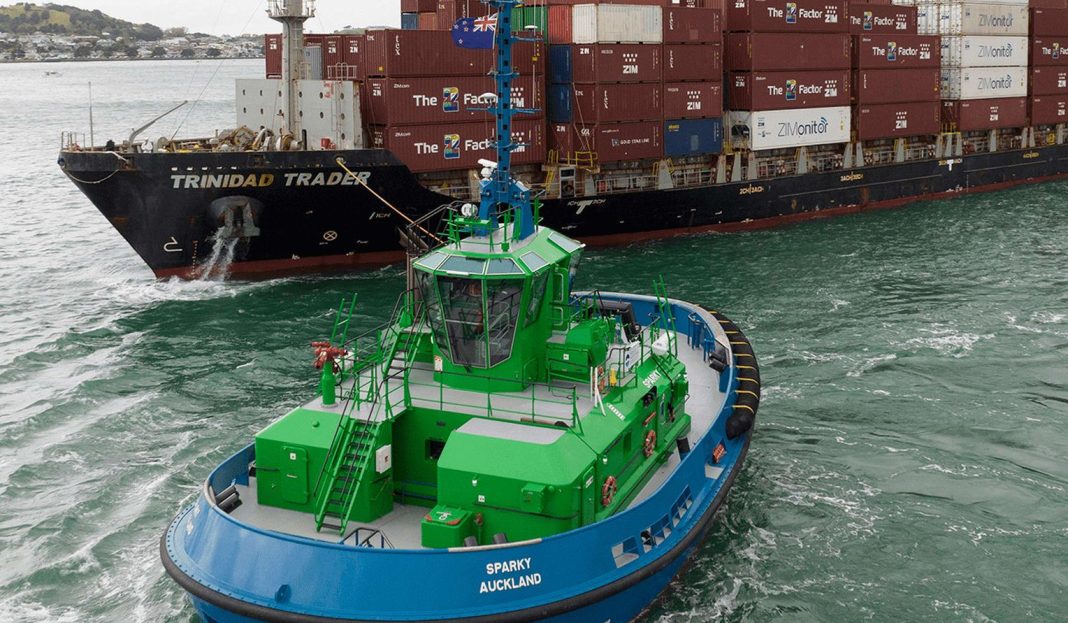 Ports of Auckland and Damen are proud to see the all-electric harbour tug Sparky included on the 2022 TIME Best Inventions List. The first vessel of the RSD 2513 design from Damen to be equipped with full electric propulsion, has proven reliability and performance in the New Zeeland port in the first months of operations.

Requiring only two hours of charging time, Sparky can be out on the water for hours to assist up to four large vessels coming into Port of Auckland, putting her 70 tonnes bollard pull to use, before she needs to be recharged. There are eight battery racks holding 2,240 batteries, totaling 2,784 kWh of power. Sparky is anticipated to save approximately 465 tonnes of CO2 in diesel emissions annually. The expected cost of operating the electric vessel is less than a third of the cost of running a diesel tug.

TIME’s Best Inventions List is the result of input from editors and correspondents around the world, who contributed their nominees for the list. Special attention from the editorial office is on the evolving sectors as the electric vehicle industry, green energy, and the metaverse. TIME then evaluated each contender on a number of key factors, including originality, efficacy, ambition, and impact.

This is not the first recognition of the innovative quality of the RSD-E Tug. Sparky recently won Tug of the Year at the 2022 International Tug and Salvage Awards and she is a finalist in the New Zealand Sustainable Business Network Awards.

“Sparky is the first electric tug of this capacity in the world,” says CEO Roger Gray from Ports of Auckland. “Developing this vessel in co-operation with Damen Shipyards was a truly innovative project for us. She is helping us step towards the ports’ decarbonization of operations and towards our long-term emissions reduction goals. E-tugs are the future for ship handling and Ports of Auckland are proud to have led the way. We are looking forward to seeing the rest of the industry follow her lead.”

Gray acknowledges the impact of Sparky for port operations: “I would like to thank the ports’ Marine team and acknowledge our partner Damen Shipyards for their work. When the project started there were no emissions-free ship-handling options around. Damen were up for the challenge and now they’ve changed the game with our e-tug Sparky. “

Spotting Sparky operating in Auckland’s Waitemata Harbour is easy: she is painted bright green and has no smoke coming out of a chimney. The electric vessel is very quiet and there are much less vibrations. This adds not only to sustainable operations but also to crew safety and wellbeing.