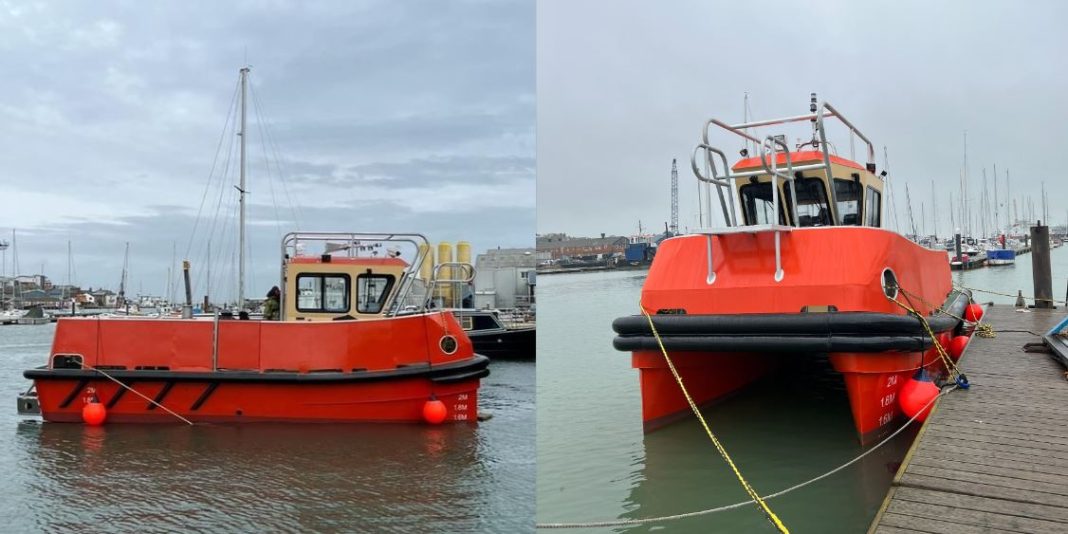 Hercules and Samson have successfully completed sea trials including a five tonne bollard pull and various manoeuvrability tests, like stopping and turning within their own length.

They have been built by Aluminium Marine Consultants (AMC) in the Isle of Wight and are now heading off to work in the oil industry in Guyana for client Marine Procurement. The naval architect responsible for the design is John Kecsmar, CEO of Ad Hoc Marine Designs. A former Isle of Wight resident himself, he now operates from Kobe in Japan.

Kecsmar says, “The tugs pack a big punch for their size and this has proven to be another successful collaboration between AMC and Ad Hoc Marine Designs. The original brief was just a simple two-line summary of requirements, and I chose a catamaran format as being a multihull, the stability it offers is 50% greater than an equivalent-sized monohull tug. Having two props spaced so far apart also provides greater manoeuvrability.”

Kecsmar continues, “I’ve been installing Yanmar engines for years, starting in the 1980s with some small patrol boats. I look for power-to-weight ratio, price and local support agents which is a particularly important factor when dealing with more remote locations.”

YANMAR FITTED BEFORE ON SEVERAL PROJECTS

Rob Stewart is commercial director at AMC. He confirms, “Local service agents in Guyana was one of the factors in specifying the engine, also we look for reliability, emissions and cost as well as spares and service support. AMC has fitted Yanmar products before on several projects, and on this one we worked closely with the customer to deliver these custom vessels, with support from Ad Hoc Naval Architects, Kort propulsion and Barrus the Yanmar UK distributor.”

Daniel Shephard is area sales manager, marine diesels at Barrus. He adds, “We were very pleased to work on this project with Aluminium Marine Consultants and Ad Hoc who both have an outstanding background in design and production of aluminium boats in the commercial sector. The Yanmar 6CH engine produces high torque, smooth running and outstanding fuel consumption across the RPM range. Coupled with the ZF gearbox and working with the Kort propulsion system they are a great fit for the tugs. The commissioning and bollard pull produced exactly the performance we expected. We hope to work with AMC and Ad Hoc again the future.”