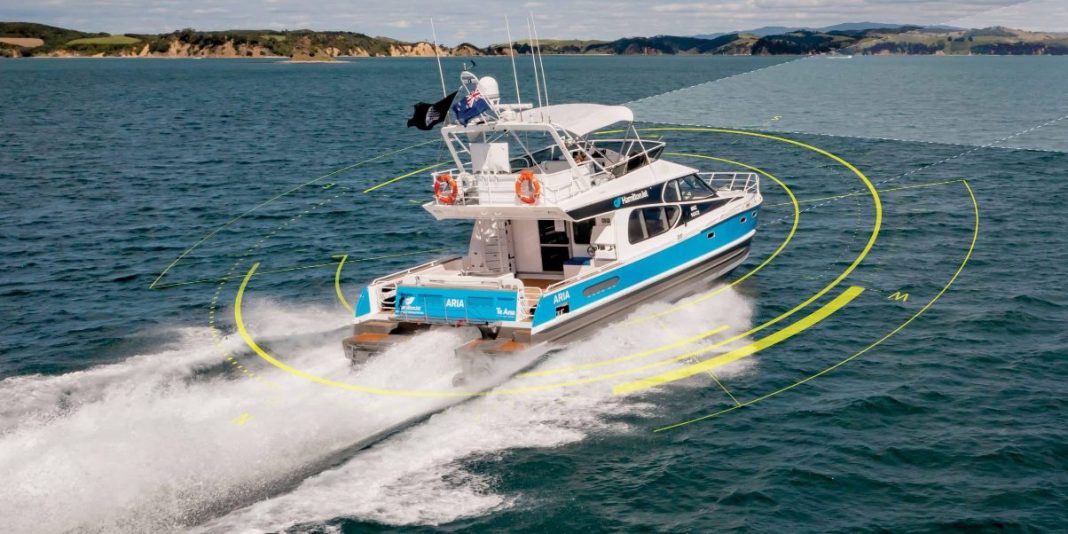 Sea Machines Robotics and HamiltonJet announce today the launch of a new intelligent voyage control product, named JETsense, that utilizes autonomous navigation, multi-sensor fusion and computer vision to move waterjet vessels to the forefront of 21st century navigation and utility. JETsense utilizes Artificial Intelligence (AI) and advanced autonomy to perceive the domain and maintain precise control of steering and speed during a voyage and re-route to avoid traffic and obstacles, while enabling a new level of streaming data to improve on-water operations.

This new HamiltonJet product, which features Sea Machines’ technology at its core, is the culmination of a partnership announced earlier this year to offer a helm-based system to advise, safeguard or assume active control of open water vessel transits.

“JETsense is the first product in the market to incorporate Sea Machines’ advanced vision package. It pairs on-board autonomy with enhanced situational awareness (through cameras, radar, AIS, depth, etc.) in a way that is highly desirable in many manned applications. Throughout development, we prioritized helm integration and the ease-of-use for mariners,” said HamiltonJet’s Ben Reed, managing director. “We work with a variety of autonomy providers around the world, but we knew Sea Machines was the best partner with which to develop JETsense due to their commercial focus and rapidly expanding technical capabilities.”

“Together with HamiltonJet we are elevating the bridge crew from continuous controller to commander, increasing ease, safety and efficiency of a vessel’s operation while giving the crew the freedom to focus beyond conventional routine control,” said Sea Machines’ CEO Michael G. Johnson. “We are pleased to continue our long-standing partnership with HamiltonJet. As an early adopter of Sea Machines technologies, HamiltonJet again reaffirms its reputation as an innovator and advanced solutions provider for high-speed marine operations.”

About Sea Machines
Headquartered in the global tech hub of Boston and operating globally, Sea Machines is the leader in pioneering autonomous command and control and advanced perception systems for the marine industries. Founded in 2015, the company builds autonomous vessel software and systems, which increase the safety, efficiency and performance of ships, workboats and commercial passenger vessels.

About HamiltonJet
HamiltonJet is the leading designer and manufacturer of water-jet propulsion systems. More than 70 years of history, a single product focus, unmatched investment in research and development, and an unfailing attention to quality, has resulted in HamiltonJet being the largest global supplier of water-jets and controls systems. Our product range of 18 jet models extends from the mechanically controlled HJ212 absorbing 313hp, all the way through to the electronically controlled HT1000, capable of absorbing 7500hp. Being at the forefront of propulsion technology, our control systems provide solutions for every requirement, and for the last fifteen years, HamiltonJet has been the leading integrator of water-jets and controls into autonomous and unmanned vessels. Water-jets is in our DNA, Creation, Innovation and Evolution.