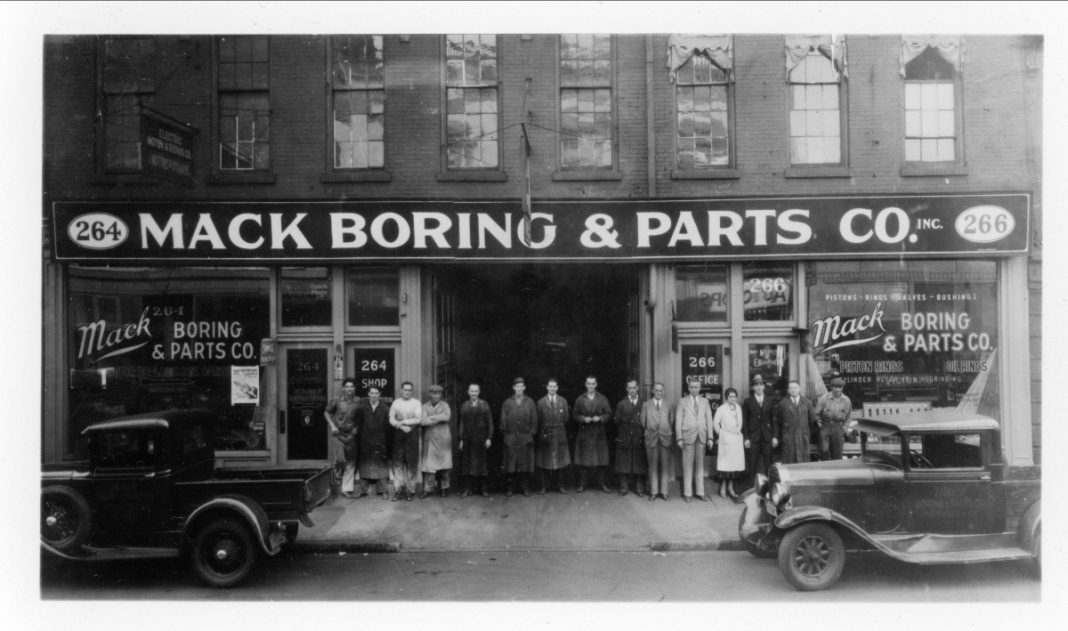 In 1922 Edward McGovern, nicknamed “Mack”, who served as a machinist in the U.S. Navy during WWI set out to use his technical skills and build a business providing parts, cylinder boring and general machine shop work. The name of his company would become Mack Boring & Parts Co. which reflected his nickname and the services he would offer. Now in its fourth generation of family leadership, Mack Boring & Parts Co. is reflecting on the past 100 years while also looking ahead to the future.

As the business has grown so have its facilities. The business started in a 500 square-foot shop in the basement of Mack’s home. This quickly became too small and required a move in the 1930’s to a 10,000 square-foot facility in Newark, N.J. The next move came in 1966 which led the business to a five-acre facility in Union, N.J. which allowed for growth, as well as the beginning of its technical school, Engine City Technical Institute. The Union facility housed the company up until 2017 when a move to Somerset, N.J. provided the company with 100,000 square feet of warehousing capability, four production cells, a multi-engine run room, paint booth, multiple training rooms and ample office space for its more than 50 employees.

In the early days, the primary focus was machining services for automotive and industrial applications. It wasn’t until Mack’s son, Edward McGovern Jr., the second generation of McGovern’s, entered the business that Mack Boring & Parts Co. brought on several gasoline engine distributorships to keep the machine/service business from growing stagnant. The first distribution lines included Continental and Gray Marine in the 1940’s followed by Chrysler in the 1960’s. Four years later in 1964, Ed Junior brought on Perkins, the company’s first line of diesel engines. Later, when Ned and Steve McGovern joined as the third generation at the helm of Mack Boring & Parts Co., did Yanmar diesels enter the picture, offering virtually unstoppable diesel engines from 8 – 22hp. The Yanmar business grew rapidly and with the booming boat building industry in the northeast, the business continued to expand into the higher horsepower pleasure boat market, replacing gas alternatives where it still thrives. Today, Patrick McGovern, is the fourth generation leading the company into the future. Mack Boring & Parts Co. represents well-known global brands such as Yanmar, Scania, Isuzu, ePropulsion Electric Motors, OXE Diesel Outboards, Suzuki Outboards, Twin Disc and ZF Marine Gears. To ensure the success of each product line, the company focuses on customer support through its extensive network of dealers.

“A key factor that has allowed Mack Boring & Parts Co. to grow to where we are today is our focus on having the best team in the industry, thrilling customers and continuous improvement,” said Patrick McGovern, president, Mack Boring & Parts Co. “Whether through training, operational efficiencies, or developing partnerships with new and/or innovative technologies, the constant drive to be better each day is what will keep us going well beyond 100 years.”

To celebrate this anniversary, Mack Boring & Parts Co. is giving away two ePropulsion motors. Anyone can enter to win by signing up for the company’s mailing list by clicking here.

To view the kick-off video for the Mack Boring & Parts Co. 100th Anniversary.