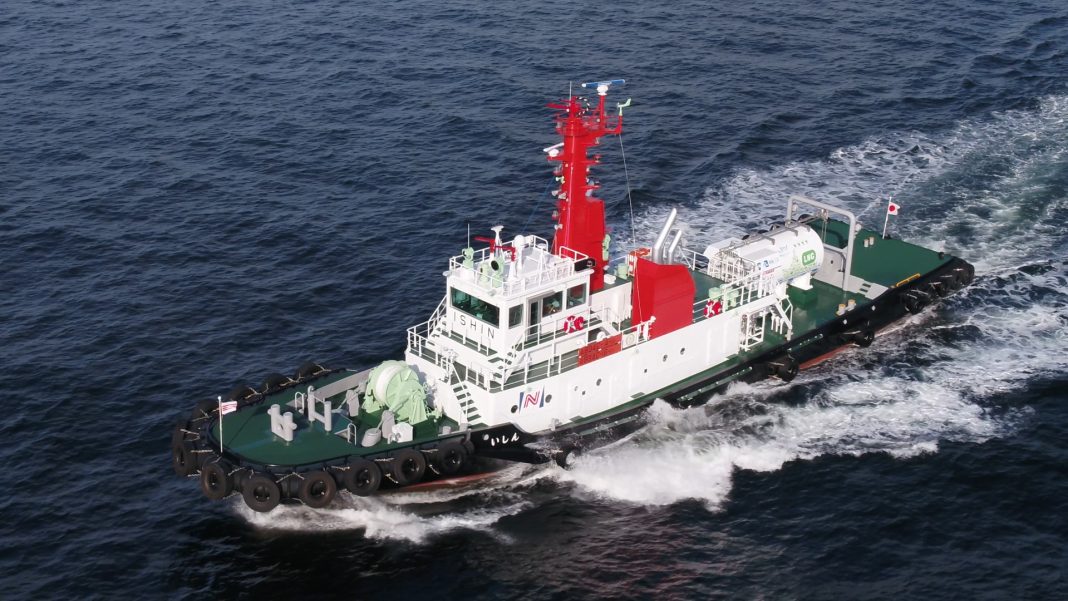 In 2017, Mitsui O.S.K. Lines, Ltd (MOL) was the first operator in Japan who decided to install two of YANMAR’s latest dual-fuel commercial marine engines 6EY26DF onboard its new tugboat, Ishin. Kangawa Shipbuilding Co., the largest tugboat manufacturer in Japan, completed the vessel at Kobe Port on February 27, 2019. Ishin was the first LNG-fuelled tugboat in Japan that conformed to the international IGF code (International Code of Safety for Ships using Gases or other Low-flashpoint Fuels). The IGF code became effective in January 2017 and regulates safety requirements for vessels running on gas

YANMAR and its advanced and reliable dual-fuel 6EY26DF engine was for MOL a logical fit with their concept of shipping. This concept incorporates environmental considerations and safety compliance, of which Ishin is the embodiment, as the company proudly holds.

“This ship realizes our corporate philosophy of reducing environmental load, and was launched to meet the demands of the times for global environmental conservation,” says Koichi Yajiima, Managing Executive Officer of MOL. “We would like to learn from the operation of this vessel and expand the LNG-related business.”

Emission regulations in the marine sector become more stringent year after year. YANMAR already started R&D for environmentally friendly LNG and dual fuel engines as an attractive means of reducing environmental impact back in 2012 and proceeded to commercialization in 2016.

A dual fuel engine that uses two types of fuel, LNG and diesel, requires advanced control technology to achieve high reliability and stable operation on the one hand, and comply with emission standards on the other. YANMAR’s 6EY26DF puts this into practice, In gas mode, NOx is reduced by about 80%, Sox/PM is reduced by about 99%, and CO2 is reduced by about 25%. As a result, 6EY26DF engines comply with IMO NOx Tier3 regulations as well as SOx Emission Control Area.

The YANMAR engines significantly contribute to reducing Ishin’s environmental footprint in accordance with the latest Tier 3 regulations. This and the tug’s compliance with the IGF safety code meant that Ishin earned the top rating of four stars from the Japanese Ministry of Land, Infrastructure, Transport and Tourism in 2019 within their Energy Conservation Rating System for Costal Ships. The rating is based on the environmental performance of LNG-fuelled ships, specifically a reduction of more than 20% in emissions of carbon dioxide (CO2) compared to vessels powered by conventional heavy oil.

Ishin is used to escort large vessels in Osaka bay and the Seto Inland Sea. This means that the tugboat not only has to deliver optimum performance in the port, but also high-speed operation for escorting ships at sea. With a top speed of 16 knots, Ishin is a real speed devil, when compared to typical tugboats in this class. Although manoeuvrability and high speed are often contradictory, this is not a problem for Ishin.

Tetsuro Nishio, president of Nihon Tug-boat Co., Ltd,, which operates the tug said: “It is thanks to the efforts of everyone involved that we have got to this point. As a company, we will work as one to ensure the safe operation of the tugboat.”

LNG is supplied truck-to-ship from an LNG tanker on the land side. The LNG fuel tank is placed on the rear deck of the ship and is a removable, very compact structure, which improves convenience during fuel supply and maintenance inspection and prevents liquid spill.