ON CLEAN COURSE WITH THE mtu GAS ENGINE 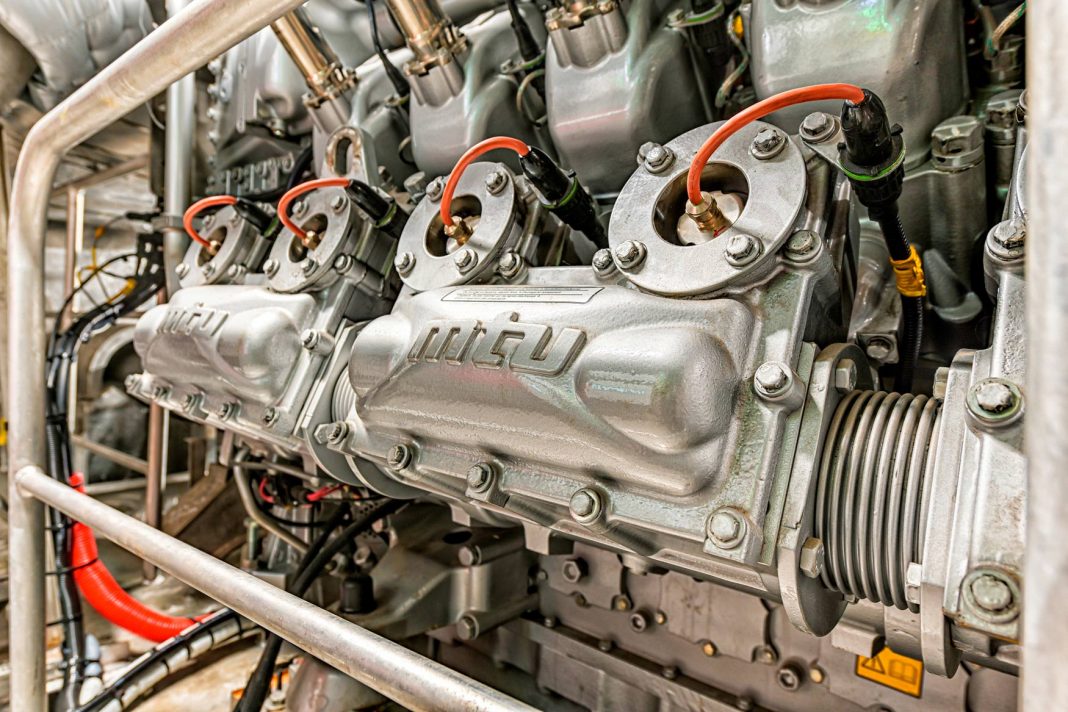 The new mtu gas engines power the first ferries and are delivered for harbor tugs and for a research project. – By Silke Rockenstein

Rolls-Royce first unveiled its mtu gas engines for marine propulsion in September 2016 at the SMM shipping exhibition in Hamburg. The new propulsion system for tugs, ferries, pushboats and special ships is the first high-speed pure gas engine that can directly drive a fixed pitch propeller, giving it dynamic acceleration capability. It undercuts the Nitrogen Oxide limits of the current IMO III emissions directive even without exhaust gas aftertreatment. It emits no sulfur oxides and Particulate mass is below the detection level.

The first pre-series engines of the 16-cylinder version were already delivered to the Strategic Marine shipyard in Vietnam at the end of 2017 for two catamarans of the Dutch shipping company Doeksen. In the summer of 2020, the first of Doeksen’s two passenger ferries, the Willem Barentsz, entered service, followed by sister ship Willem de Vlamingh in early 2021. The shipping company of the Konstanz municipal utility in southern Germany received the first gas engines of the 8-cylinder version at the end of 2019 for a new Lake Constance ferry, which will enter service at the end of 2021. Rolls-Royce has also delivered the first gas engines for a harbor tug with hybrid propulsion. Flensburg University of Applied Sciences is using the benefits of this engine for an energy transition research project looking at the capabilities of wind turbines for grid support.

Fuel consumption, emissions, safety and acceleration were the focus of development from the outset. The new mtu gas engines were equipped with multipoint gas injection, dynamic engine control and advanced turbocharging. The multipoint gas injection system ensures dynamic acceleration and reduced emissions. The combustion concept enables compliance with IMO III emission standards without additional exhaust gas aftertreatment. The controlled combustion also ensures efficient fuel use. A single-stage turbocharging system with two exhaust gas turbochargers operating in parallel is used. The high efficiency turbochargers are the third generation of the ZR series, and the turbocharging system also incorporates a controllable compressor bypass and intake throttling concept. The engine thus has sufficient power reserves throughout the entire speed range for difficult driving maneuvers. Thanks to the double-walled design of the gas system, the engine room can be designed to be diesel-like. The mtu gas engine is compliant with the official international IGF code (“gas-safe engine room”) of the IMO.

“Even though the Corona pandemic is currently in focus worldwide, we must not forget the environment. In the maritime industry, we need sustainable solutions that reduce pollutant emissions. I am pleased that we can now already add the second LNG ferry to our fleet,” said Dirk Spoor, CEO of Reederei Doeksen, on the occasion of the commissioning of the Willem de Vlamingh in January 2021 in Harlingen, the Netherlands. Already during the first voyages in 2020, other advantages of the gas engines that stood out were that they are particularly quiet, do not produce vibrations, unpleasant odor or black smoke.

Like its sister ship, the new 70-meter-long ferry is made entirely of aluminum. This makes it lighter and consumes less fuel than conventional ferries. The 16-cylinder mtu 4000 series gas engines produce 1,492 kW each, giving the ferry a top speed of 14 knots. The existing fleet can make good use of the reinforcement – every year, around 800,000 people want to be transported back and forth from Harlingen on the Dutch mainland to the islands of Vlieland and Terschelling on the North Sea in the Wadden Sea nature reserve, around 30 kilometers away. The Wadden Sea was declared a UNESCO World Heritage Site in 2009.

Initially, the ship will be operated with liquefied natural gas (LNG), which the shipping company sees as a kind of transitional fuel. In the future – as soon as the necessary infrastructure is in place – it would like to switch to more sustainable bio-LNG or LBG (Liquified Bio Gas). A residual heat recovery system already ensures that thermal energy from both the engine cooling system and the exhaust gases is used. Two Orcan units also supply all the electrical power needs of the bow thruster system and meet some of the normal electrical needs on board.

“We are proud that Reederei Doeksen has selected our new gas engines to operate their vessels in an environmentally friendly way on the Wadden Sea, which has been designated as a special area of conservation,” said Denise Kurtulus, head of marine business at Rolls-Royce Power Systems. “Together with our partner, we are thus doing everything we can to advance the maritime energy revolution.”

Another ferry with the new mtu gas engines will enter service in Constance, southern Germany, until early 2022. Stadtwerke Konstanz operates a Lake Constance ferry fleet there with a total of 6 ships that shuttle back and forth between the two shores around the clock every day. The company received the first gas engines of the 8-cylinder version with an output of 746 kilowatts for the first gas-powered fleet member at the end of 2019. The 82.5-meter vessel, with a capacity of 62 vehicles and 700 passengers, is currently under construction.

Rolls-Royce supplied two 16V4000M55RN mtu gas engines to Sembcorp Marine Integrated Yard for the construction of the world’s first LNG (Liquefied Natural Gas) hybrid propulsion tug. The harbor tug will be operated in Singapore by Jurong Marine Services, a wholly owned subsidiary of Sembcorp Marine. The new LNG hybrid tug is the first of 12 tugs Sembcorp Marine plans to design and build to replace existing diesel-powered tugs in the years leading up to 2025.

This is the world’s first LNG hybrid tug powered by mtu gas engines. The LNG hybrid tug was designed by LMG Marin (Norway), part of the Sembcorp Marine Group, for the delivery of 65-ton ABS-class bollard pull and is expected to be completed later in 2021. The tug’s main propulsion system consists of two 16-cylinder mtu Series 4000 gas engines that will deliver a combined total output of 2,984 kilowatts at 1,600 revolutions per minute (rpm). The LNG hybrid propulsion system will be able to flexibly respond to different operating modes and switch between low-emission LNG engines and zero-emission battery power.

At Flensburg University of Applied Sciences in northern Germany, a test stand is being set up to simulate a wind turbine using an 8-cylinder mtu gas engine. The gas engine drives a generator whose generated power is fed into the local grid of the Flensburg public utility company via a transformer and a medium-voltage switchgear. These components replicate the structure of a wind turbine. The emulator is being used to research the extent to which wind turbines can provide grid support and take on grid-stabilizing tasks in the event of grid disruptions.

The new gas engine is part of Rolls-Royce’s green and high-tech program. In this way, the company is investing specifically in environmentally friendly future solutions for lower emissions and reduced consumption of energy and raw materials. Rolls-Royce’s Green and High-Tech program focuses on efficiency enhancement, alternative fuels, electrification, digitalization and integrated system solutions, with the aim of offering complete powertrain and energy generation systems.