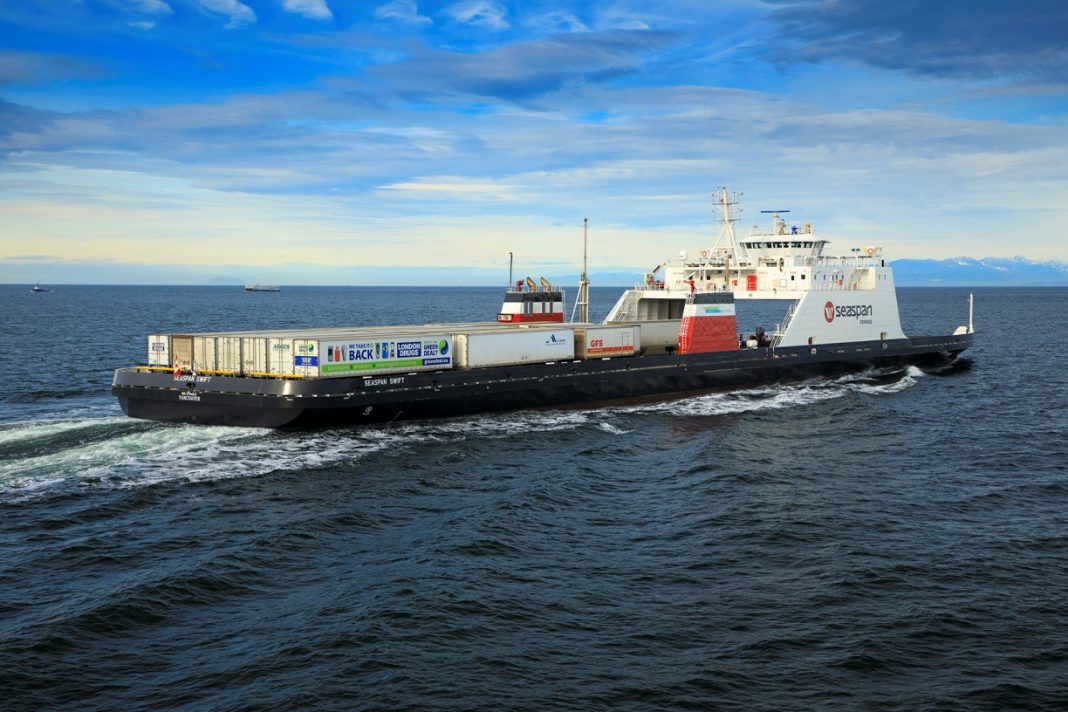 This week, Seaspan Ferries Corporation (Seaspan) became the first Canadian marine company to pilot the use of Renewable Natural Gas (RNG) to reduce greenhouse gas emissions produced by its roll-on, roll-off liquefied natural gas (LNG) powered marine fleet. Seaspan expects that data from the pilot will confirm that, by using RNG, greenhouse gas emissions can be reduced by upwards of 85 per cent versus traditional diesel fuel.

As part of Seaspan’s continued efforts to reduce vessel emissions and explore alternative fuels, the company has worked closely with FortisBC Energy Inc. (FortisBC) to secure a source of certified carbon neutral RNG.

“Renewable Natural Gas, when used in our fleet in conjunction with traditional natural gas, will allow us to move towards our emissions reduction goals and make a real impact on our carbon footprint,” said Harly Penner, director of fleet engineering and vessel development at Seaspan. “It also allows us to leverage the growing production of RNG in our region. We look forward to continuing to work on growing our sustainability efforts in the near future.”

FortisBC’s RNG program re-opened to new subscribers on October 15 this year as the company has been successful in dramatically increasing supply over the last year. By the end of 2021, FortisBC expects it will have tripled its RNG supply from 2020 and is poised to potentially triple it again by the end of 2022 if expected projects proceed on pace.

“We know that our future is a renewable one – so when Seaspan approached us about being a part of an RNG pilot for marine LNG vessels, we were tremendously excited,” said Mike Leclair, vice-president, major projects and LNG at FortisBC. “Using Renewable Natural Gas for marine LNG has the potential to be an emissions game changer for the sector and is yet another example of how renewable gas development is transforming our natural gas infrastructure into a delivery system for carbon neutral energy, supporting B.C’s climate action goals.”

When bacteria breaks down organic waste from sources such as landfill sites, agricultural waste and wastewater from treatment facilities, it produces a biogas mostly made of methane. FortisBC captures and purifies this biogas to create RNG, a certified carbon neutral energy source, preventing the release of methane into the environment. As RNG mixes seamlessly into the existing natural gas infrastructure, it displaces equivalent volumes of conventional natural gas and lowers greenhouse gas emissions overall. Like conventional natural gas, RNG can be used as a transportation fuel in the form of compressed natural gas or LNG. Renewable Natural Gas has been approved by BC’s Ministry of Energy, Mines and Low Carbon Innovation for inclusion within the province’s Low Carbon Fuel Standard for transportation.

Increasing the use of renewable gases, like RNG, is an important part of meeting the targets of the Province’s CleanBC plan and is a cornerstone of FortisBC’s 30BY30 target to reduce its customers’ greenhouse gas emissions by 30 per cent by 2030. FortisBC believes applying carbon-neutral energy to proven technology like LNG powered marine engines provides a viable way for forward thinking marine shipping companies like Seaspan to reduce greenhouse gas emissions and strengthens B.C.’s potential credentials as a desirable LNG marine fuelling hub.

Seaspan Ferries operates a daily commercial ferry service between terminals on British Columbia’s Lower Mainland at Tilbury in Delta and Surrey, and on Vancouver Island at Duke Point Nanaimo and Victoria (Swartz Bay). The ferry service is offered 7 days a week, with over 18 sailings a day. Seaspan Ferries is part of Seaspan Marine Transportation, a group of Canadian companies that are primarily involved in ship assist, coastal and deep-sea transportation, ferry services and fuel bunkering on the west coast of North America. With well over a century of successful participation in coastal commerce, Seaspan is a major partner in the Pacific Northwest marine economy.