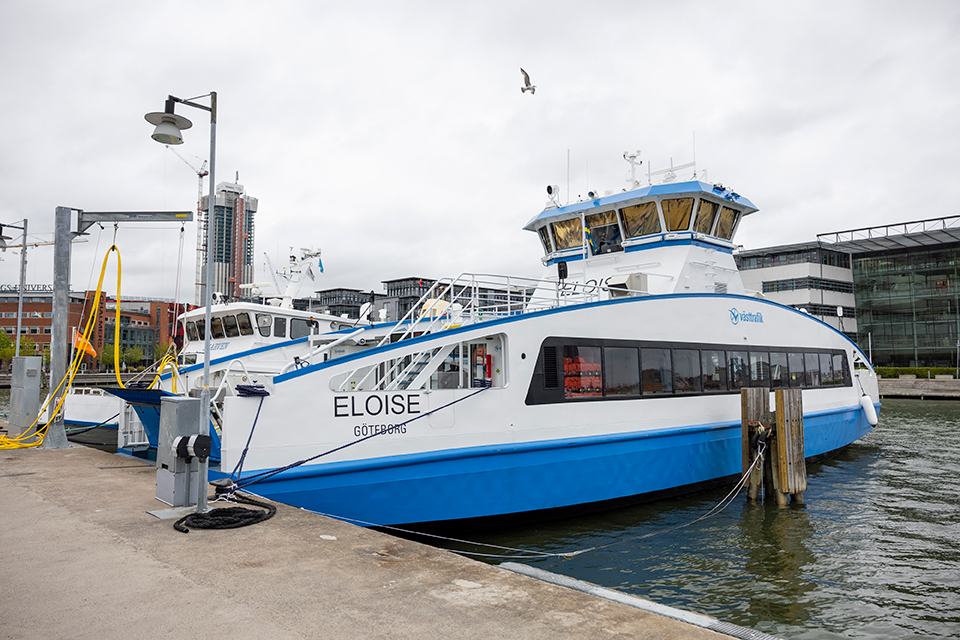 Gothenburg’s fourth passenger ferry from Työvene has arrived in the city – two months early. The new electric hybrid ferry is another step towards the goal of electrifying the public transportation in Gothenburg.

The electric hybrid ferry Eloise attracted a lot of attention when she was given her name in the autumn of 2021 – Gothenburgers submitted almost 4,600 name proposals. The ferry called at the port of Gothenburg on Friday 6 May – two months earlier than promised – when the boat was formally handed over from Työvene to Västtrafik.

Eloise is a commuter ferry for cyclists and pedestrians, with a capacity of 298 people and 80 bicycles. The boat is of the same model as its sibling Elvy, which Työvene delivered to Gothenburg in 2019, but with 25 percent better battery capacity from EST-Floattech. With the ferry, Västtrafik will be a little bit closer to its goal that the public transportation in Gothenburg will be electrified by 2030.

– We are very proud of the delivery. Both because we have received the confidence from Västtrafik to design and build Eloise, but mainly because we can contribute with this green public transport solution that reduces emissions, and at the same time is of great benefit to Gothenburgers, says Juha Granqvist, CEO of Työvene.

On June 10, Eloise will be named under pomp and circumstance, and will then start operating on line 286 from June 30. Until then, the crew trains with the ferry and prepares it for the start of traffic.

The electric hybrid ferry Eloise was formally handed over to the customer Västtrafik on Friday the 6th of May.

Facts about the electric ferries in Gothenburg
The ferries operate on line 286, Älvsnabbare, across the Göta River in Gothenburg. The first two, Älveli and Älvfrida, are diesel-electric and were put into operation in 2015. The third ferry, Elvy, is powered by an electric hybrid engine and put into operation in 2019. In June 2022, the second electric hybrid ferry Eloise will be inaugurated.

• The ferries are double-ended shuttle ferries designed for fast boarding and disembarkation for travelers both with and without a bicycle on short trips across the river.
• The passenger capacity is 298 people and there is room for 80 bicycles.
• At each end there are propeller units that are rotatable 360 degrees and have double counter-rotating propellers.
• Length 32.99 meters.
• Maximum width 8.71 meters
• Speed 11 knot..

About Työvene
Uudenkaupungin Työvene (Uki Workboat) designs and builds high-quality boats and ships that are used for demanding purposes in professional use.