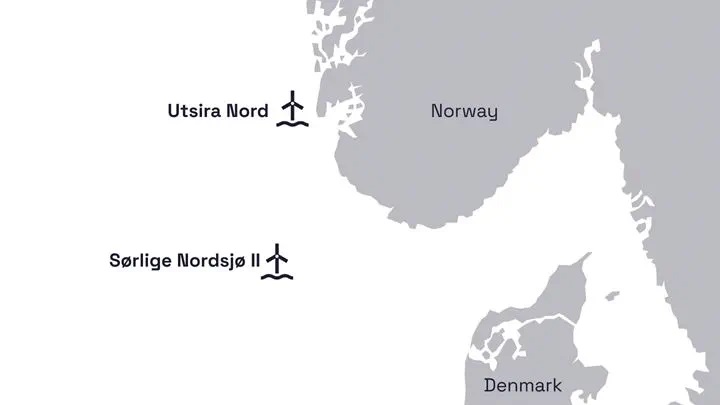 Rosenberg and Blåvinge – a partnership between Fred. Olsen Seawind, Hafslund Eco, and Ørsted – are entering into an exclusive collaboration to develop floating offshore wind farms. This joint initiative demonstrates the great industrial potential that offshore wind energy represents for the Norwegian service and supply industry.

The agreement covers an exclusive partnership in which Blåvinge and Rosenberg will jointly develop plans for how large-scale floating wind farms can be established in Norway with the help of Norwegian suppliers.

If Blåvinge is granted a permit to develop offshore wind at Utsira Nord, major investments will be made including within the construction of foundations for the floating offshore wind farms. This will result in a significant number of man-years in both the development and construction phases.

Blåvinge is hoping to develop both bottom-fixed and floating wind projects, while also contributing to develop competitive Norwegian supply chains that can deliver the large-scale expansion of offshore wind farms in Norway. The Norwegian service and supply industry is uniquely positioned to utilise its offshore expertise to develop new solutions and create value in the offshore wind industry – not just in Norway, but internationally.

Few companies better represent the restructuring that the Norwegian service and supply industry underwent in the early days of the petroleum activities in Norway than Rosenberg. At that time, Rosenberg was transformed from a shipyard into a major supplier of projects to the oil and gas industry. Through the partnership with Blåvinge, Rosenberg can now become a key supplier to the renewables industry.

“Large-scale floating offshore wind farms have not yet been built. By combining the unique expertise of Rosenberg and Blåvinge, together we can find the best solutions for such a development. We’re therefore very pleased to have joined forces with Rosenberg who are one of the strongest players in planning, construction and assembly of large steel constructions” – Lars Bender, CEO of Fred. Olsen Seawind.

“With this collaboration, Blåvinge is demonstrating how it’s possible to build on the Norwegian supply chains for the offshore wind industry. In order for offshore wind to become a new industrial adventure, we’re dependent on the authorities following up and announcing new areas for both floating and bottom-fixed wind farms” – Finn Bjørn Ruyter, CEO of Hafslund Eco.

“Norway has unique potential for developing offshore wind energy, not least with floating offshore wind farms. Together with our strong Norwegian partners Fred. Olsen Seawind, and Hafslund Eco, we’re ready to write the next chapter of Norway’s energy story. The fact that we’ve now got such a talented player as Rosenberg on board testifies to the quality and knowledge that already exists among the suppliers in the Norwegian market” – Rasmus Errboe, Head of Continental Europe, Ørsted.

“Fred. Olsen Seawind, Hafslund Eco, and Ørsted have unique expertise and experience in offshore wind, power market, and marine operations. Their solidity and credibility make them the perfect partner in our goal of becoming a leading supplier to the offshore wind industry” – Jan Narvestad, Managing Director of Rosenberg Worley.

Further information about the companies behind Blåvinge

Fred. Olsen Seawind
Fred. Olsen related companies’ marine history dates back to 1848, and offers Blåvinge expertise within technology development, marine operations and logistics, in addition to more than 25 years of expertise in the development, construction, operation, and ownership of wind power plants.

Hafslund Eco
As the country’s second largest producer of energy, Hafslund Eco has in-depth knowledge of the Nordic energy system and energy market, which gives Blåvinge a strategic advantage as a new renewable energy source is entering the market.

With its long industrial history, Rosenberg Worley has developed into a total supplier of offshore wind energy production projects. The company, as part of Worley, has unique access to expertise and resources to help realise offshore wind projects.