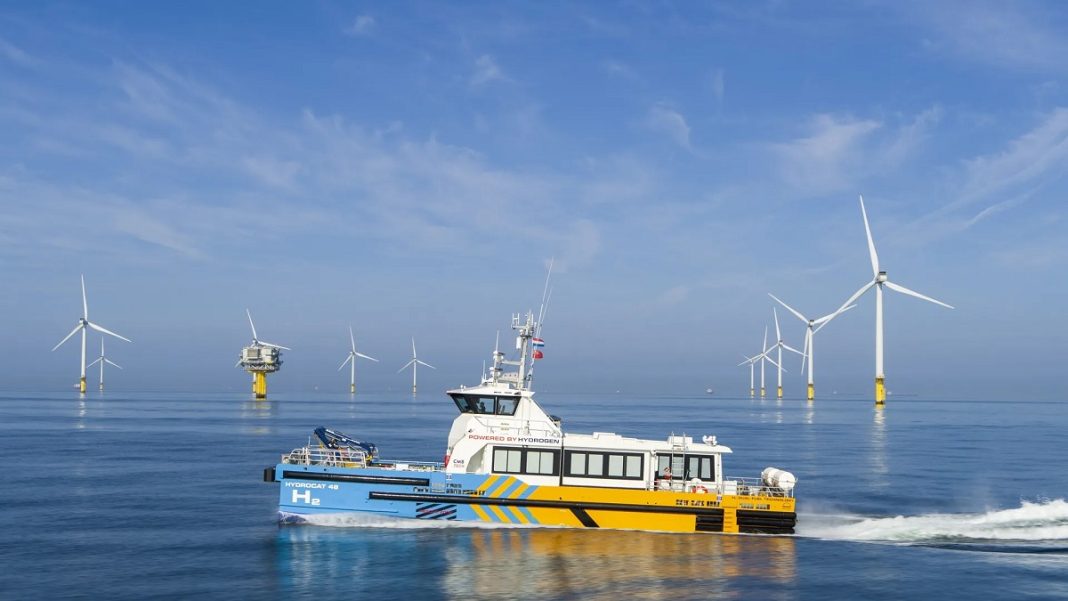 As part of its journey towards becoming carbon neutral by 2030, without the use of offsets, Vestas is pioneering innovative solutions to reduce carbon emissions from its own operations. In collaboration with long-term supplier Windcat Workboats, Vestas is launching a pilot program to explore how the world’s first hydrogen-powered crew transfer vessel (CTV) can help reduce carbon emissions from its offshore service operations.

The CTV is powered by a dual-fuel solution, capable of being powered by hydrogen in a combination with marine gas oil. Hydrogen fuel contains no carbon, signalling the potential to significantly reduce carbon emissions while maintaining the same power output. The solution will be tested as part of a pilot program at the Norther Wind Farm, and is planned to launch on 15 July. Running until the end of 2022, the program will offer the chance for Vestas to explore the most scalable approaches to incorporate hydrogen into its operational setup. The goal of the trial will be to collect insights into the opportunities and limitations of hydrogen-powered vessels in daily operations.

“Hard to abate sectors, such as shipping, will be the final frontier in our global journey towards decarbonisation. Hydrogen is a crucial technology to advance this journey, which is why Vestas is eager to test its potential to reduce emissions from our service operations.  A broader application of decarbonising technologies can only progress with support from industry leaders, which is why Vestas is proud to be driving this pilot,” says Christian Venderby, Executive Vice President, Service, Vestas.

Carbon emissions associated with offshore operations currently account for one third of Vestas’ scope 1&2 emissions, therefore deploying hydrogen fuelled vessels will be crucial for Vestas’ sustainability journey. The new CTV holds the potential to generate a CO2 saving of 158 tonnes, an estimated saving of 37 percent less carbon emissions in comparison to a traditional vessel. This saving will be validated during the pilot, as well as exploring how the solution can be scaled up if it proves to make an impact to Vestas’ scope 1&2 emissions.

At present, the vessel is projected to be powered mostly by grey hydrogen due to a lack of available green hydrogen in the amounts needed. Through the pilot, Vestas aims to mature a pathway for green hydrogen in its offshore operations, that can be leveraged once green hydrogen has reached the required level of maturity.

“This vessel, developed with our sister company CMB.TECH, offers the industry a cost-effective solution to significantly reduce emissions from service vessels, which can be applied to any wind farm today. By using dual fuel combustion engines, we can make hydrogen technology operational in the industry and kick-start further development of the technology, regulation, supply chain, etc. Collaborations like these are what is needed to be able to scale this technology further and we thank Vestas for taking this first step,” says Willem van der Wel, Managing Director of Windcat Workboats.

“The operation of a CTV in the North Sea that also runs on hydrogen will create the necessary demand for investments in hydrogen supply. Norther is honoured that Vestas is bootstrapping this value chain by operating this CTV at Norther’s offshore wind farm and pleased that we are contributing to the reduction of emissions in this way,” says Christophe De Schryver, Executive Manager, Norther Wind Farm.