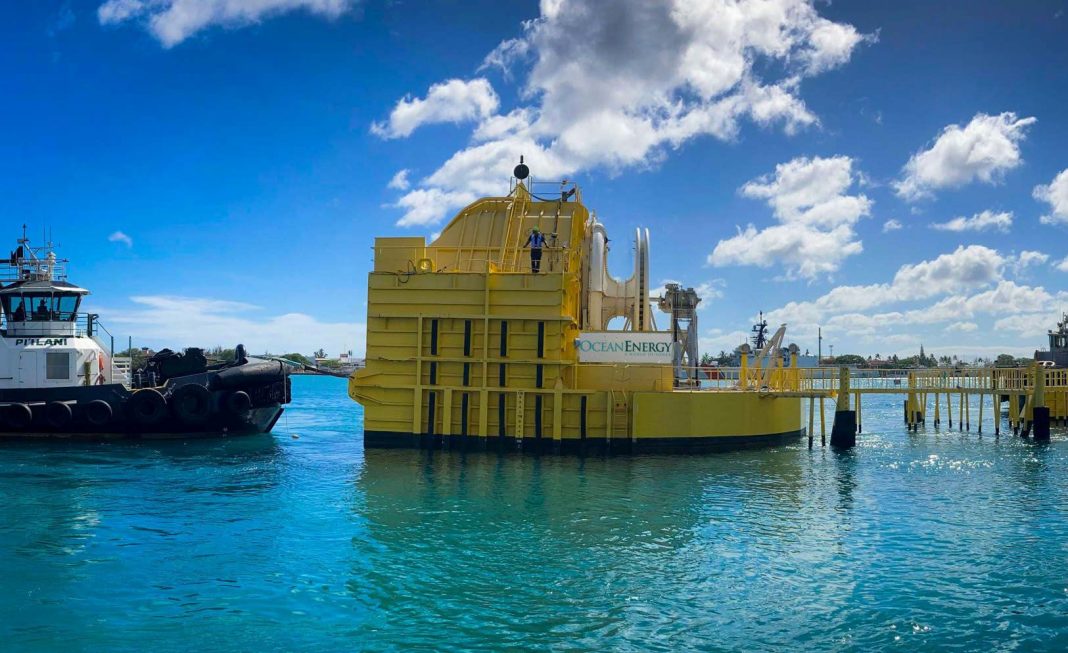 A €19.6 million partnership project aiming to be the stepping stone towards large scale wave energy commercialisation, will be launched this week at the International Conference on Ocean Energy in San Sebastian, Spain.

WEDUSEA is a pioneering collaboration between 14 partners, spanning industry  and academia from across the UK, Ireland, France, Germany and Spain. It is co-ordinated by the Irish company OceanEnergy.

The project is co-funded by the EU Horizon Europe Programme and by Innovate UK, the UK’s innovation agency.

OceanEnergy has developed the OE35, which is the world’s largest capacity floating wave energy device. Floating on the ocean’s surface, the device incorporates a trapped air volume, with the lower part open to the sea. Wave pressures at the submerged opening cause the water to oscillate and drive the trapped air through a turbine to generate electricity. This energy can be exported to the grid or used in other offshore applications.

Prof Tony Lewis, Chief Technical Officer at OceanEnergy, explains: “This rigorous technical and environmental demonstration will happen over a two-year period in Atlantic wave conditions. We believe this will be transformational for the wave energy industry, with outcomes directly impacting policy, technical standards, public perception and investor confidence. Wave energy is the world’s most valuable and persistent renewable resource. However, it has yet to be fully realised.  The project will demonstrate that  wave technology is on a cost reduction trajectory and will thus be a stepping stone to larger commercial array scale up and further industrialisation. We predict that the natural energy of the world’s oceans will one day supply much of the grid.”

Matthijs Soede from the European Commission says:  “We are expecting WEDUSEA to take wave energy beyond the state of the art by the collaboration of partners with a multi-disciplinary background and that it will contribute to the deployment of arrays of reliable wave energy devices to achieve the 1GW target for 2030 as presented in our Offshore Renewable Energy Strategy. The current energy crisis shows that the use of multiple energy sources is important to improve the security of supply and a breakthrough in ocean energy would be welcome.”

Myles Heward, Project Manager at the European Marine Energy Centre, says: “The innovative actions taken in this programme aim to improve the efficiency, reliability, scalability and sustainability of wave energy technology, and reduce the Levelised Cost of Electricity of the technology by over 30%. This will help to de-risk investments in wave energy.”

The four year WEDUSEA project has three phases. The first phase is the initial design of a device suited to European Marine Energy test site’s ocean conditions . This will be followed by the demonstration at the site, lasting two years. The final phase will be commercialisation and dissemination which sees the capitalisation and exploitation of the results. OceanEnergy and other consortium companies will actively exploit the results through new innovations, products and services. The results will also be disseminated to feed both environmental databases and IEC electrotechnical standards.

Prof Lars Johanning of University of Exeter says: “WEDUSEA is set to be a major catalyst for the wave energy industry, unlocking the full potential of this exciting renewable technology. WEDUSEA builds on the partners’ experience in prior EU projects. In particular, it draws on the findings of the Components for Ocean Renewable Energy Systems (CORES) project, funded by the EU under the 7th Framework Programme, in which new components and systems for ocean energy devices were developed and trialled. We are expecting WEDUSEA will make a significant contribution to meeting the challenges of climate change and the energy crisis through innovation and rigorous testing and research.”

Rémi Gruet, CEO of  the trade association Ocean Energy Europe, adds: “Wave energy is at full-scale stage now and projects like WEDUSEA are paving the way for pilot farms and sector-wide industrialisation. As an EU-UK collaboration project, it will demonstrate the potential for wave energy to make a significant contribution to the EU Green Deal target. Wave energy will help smooth production peaks or dips from variable wind and ensure European energy independence.”