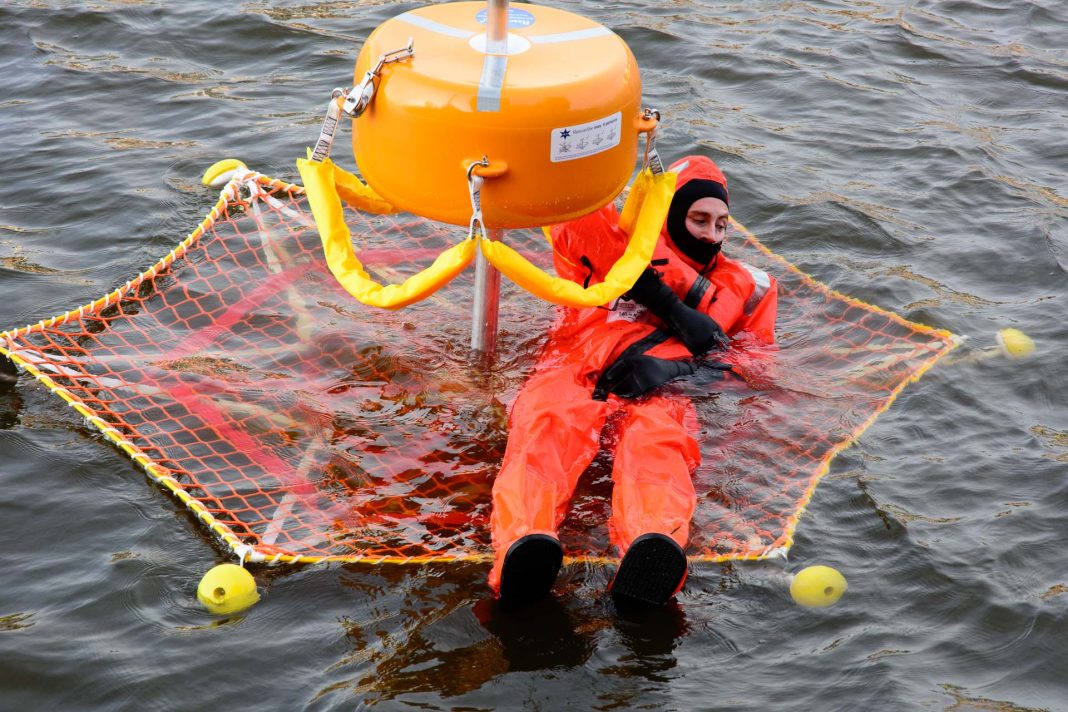 In February 2022 the container ship MSC Rapollo saved crew members as their vessel sank far from shore.
The crew was in the water under heavy weather conditions, with waves up to 5 meters.

By using the RLS Rescue Star, the MSC Rapollo was able to get the men out of the rough sea and safely onboard.

Captain Mühr says: “..for me this successful rescue in the most adverse sea conditions is a great success because it signals in a clear way how reliable the system is.”

The container ship MSC Rapallo of the German shipping company CP Offen, Hamburg, is on 23 February 2022 in the South China Sea on the way from China to Malaysia when shortly after 4 pm it is asked by the Vietnamese distress control centre to participate in the search and rescue of shipwrecked VANDON ACE.

At about 7:50 pm, the MSC Rapallo is the first ship to reach the indicated accident position 08°53′ N (northern latitude) and 109°24′ E (eastern longitude) and starts the search for survivors.

Around 11 pm, four crew members of the sunken VANDON ACE are discovered and rescued by the MSC Rapallo drifting in heavy seas. The deck logbook of the MSC Rapallo shows a wave height of 5 meters and the wind force NE 10 Beaufort at 2 am.

For the first time, the Rescue Starâ was used in a rescue operation – described by the shipping company as dramatic – of the container ship MSC Rapallo of the German CPO container shipping company, Hamburg, to rescue a severely exhausted person in danger of death who was floating in the water under extreme heavy weather and swell conditions in darkness in a recumbent rescue position, while protecting the circulation.

„23:30 – recovered third person by the use of Rescue Star attached to ship´s crane. Rescue Star is part of ship´s emergency equipment designed for rescue of people from water. Rescue star proved to be effective in picking up persons from water even in difficult weather conditions. In this particular case, recovery was possible only by using rescue star, as person was located near aft of the vessel, where no other means of delivery on board. Rescued person was weak and exhausted, not moving and half-conscious, later on board recovered quickly.”

In the history of maritime shipping, it is a novelty that a severely exhausted shipwrecked person at risk of circulatory collapse (salvage death) under such adverse heavy weather conditions could be taken on board unharmed, quickly and safely from the raging sea in a horizontal position by a high-sided container ship rolling in the swell.

In the following photo 1, taken by a crew member during the rescue manoeuvre of MSC Rapallo, you can see how the Rescue Star is lowered to two people floating in the water, both kept afloat with life jackets, hoping to be rescued.

The second photo shows the weakened but rescued castaway on a stretcher after being taken from the Rescue Starâ on deck and given initial medical care.

From the attached description: “The VANDON ACE ship crashed at sea, 10 crew members were missing”, the context of this rescue operation is clear.

Due to the extremely bad weather conditions, the captain of the MSC Rapallo is said to have been worried at first about launching the Rescue Starâ, as he had no previous experience in such harsh and difficult weather conditions. However, Mr. Captain Mühr was able to convince him on the satellite phone to give it a try.

During the development phase of the Rescue Starâ, testing had taken place in waves up to 4 m high and lower wind forces on the North Atlantic.

The recommendation on the part of the shipping company and the final decision of the ship’s management to use the Rescue Starâ as the only chance for the severely weakened shipwrecked person proved to be fully justified and problem-free, so that the captain, as reported to me by the shipping company, expressed himself very positively in this regard. For this reason, I would like to remind you of a statement made by the Ship Safety Department, BG Verkehr, Hamburg, during the past development period of the Rescue Star:

“The RLS Rescue Star can be used regardless of wave height and lee or windward side: that is true, you can use it in waves up to 6 or 10 meters, because the rescue star is all the time below the wave.

Also Mr. Captain Mühr, shipping company CP Offen, had confidence in this new two-component sea rescue technology already in 2014 and informed the captains of the fleet of CPO container shipping company, Hamburg, which he supervises, about the introduction of the Rescue Starâ:

“The only product that convinced us so far was the so called „Rescue Star“. Simple to say a heavy duty upside down mesh umbrella which is capable to carry up to four persons at the same time out of the water…” Captain Ortwin Mühr

Another decisive factor is that this two-component rescue technique does not endanger the ship’s own crew. An important point on which the IMO also places great emphasis in SOLAS Regulation III / 17-

1. “§ 1…. The plans and procedures shall identify the equipment intended to be used for recovery

purposes and measures to be taken to minimize the risk to shipboard personal involved in recovery operations………………. “

“…for me this successful rescue in the most adverse sea conditions is a great success because it signals in a clear way how reliable the system is.”

And a little later:

“I am very proud that the Rescue Star could be successfully deployed here despite 5 m waves and slight rolling of our vessel. The first telephone reports from the captain were very positive in this regard.”

“Actually, a pity that the rescued sailor will never know how much heart and perseverance was needed to save his life.

And after this difficult rescue, you can be sure that all the homework was done during development.”

With the – as far as I know – problem-free deployment of the Rescue Starâ under these conditions, which until now have been almost hopeless for exhausted shipwrecked persons at risk of circulatory problems, a new standard for survival chances at sea has been achieved.