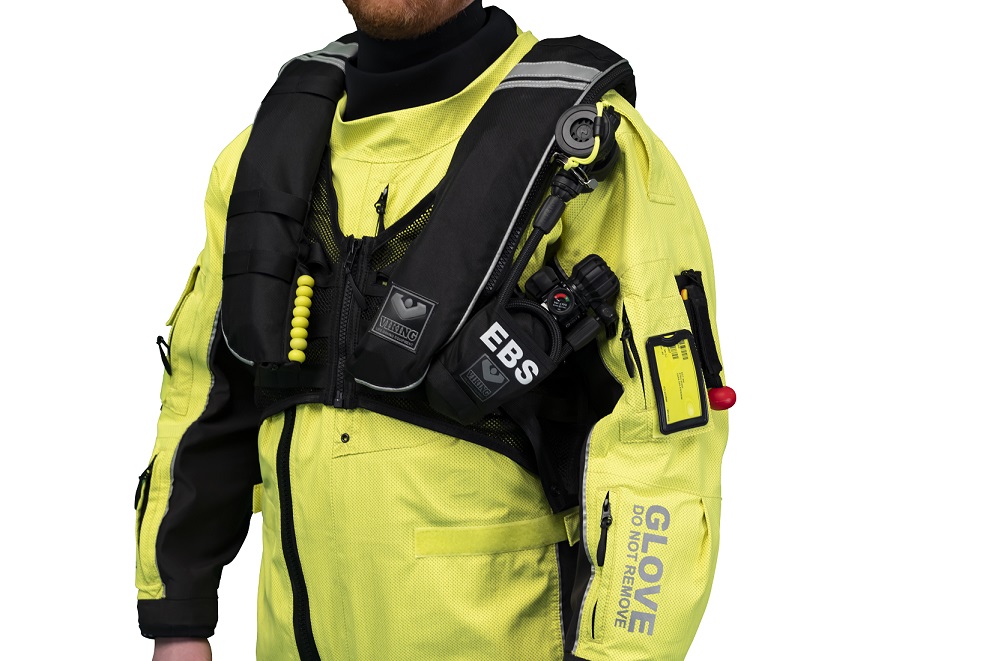 To provide crews and passengers with the air they need to escape from a helicopter in an emergency, EBS solutions sometimes feature bulky air cylinders which pull on the lifejacket and rest on the hip during in-flight hours, impeding mobility and potentially causing discomfort.

As the market leading supplier of aircrew lifejackets in Europe, VIKING sought input from North Sea and other key clients over a 36-month period, with the aim of meeting latest industry safety performance requirements and customer requests for greater comfort in a single step.

The new approval is the fruit of VIKING’s long-term collaborative partnership with the Aqualung Group, an industry leader in underwater breathing solutions. The VIKING YouSafe™ Crew Pro lifejacket includes Aqualung’s lightest and most compact EBS [MEER LW]. Its carbon composite cylinder is not only smaller than its aluminum predecessor, but 350g lighter while having 20% more air capacity. In addition to its light weight and compact size, MEER incorporates several optimized features for ease of use in an emergency. Its 360° first stage swivel connection, left and right hand neutral second stage, its color-coded indicator for remaining air supply and system on/off visual indicator make it the perfect fit for our VIKING YouSafe™ Crew Pro lifejacket.

“Lifejacket weight and user mobility are significant issues for aircrews, whether in high pressure situations or during long in-flight hours, especially since the inclusion of EBS as standard,” said Heather McManus, Global Sales Manager Aviation, VIKING. “In the North Sea, market conditions mean crews spend less time waiting for jobs on the ground and longer in the air. When the air cylinder is too big and too heavy, comfort is also impacted.”

McManus said that the VIKING YouSafe™ Crew Pro lifejacket would satisfy a clear market need among aircrew, but that its enhanced performance would be as interesting to passengers. “Beyond the greater comfort, if all lifejacket users on board are saving 350g in weight the resulting payload gain could translate to extra luggage capacity. We believe that the first ergonomic, ETSO-approved lifejacket with an ETSO EBS will attract interest all over Europe and beyond.”

In line with VIKING’s commitment to continuous innovation in PPE, the development period has been used as an opportunity to upgrade other VIKING YouSafe™ Crew Pro lifejacket features. Buoyancy chambers have been enhanced, while the profile of the back of the jacket has been lowered to increase helmet and headset clearance. The jacket has also been reprofiled to enhance line of sight during landings for pilots, with the rear bladder streamlined and the activation handle moved inside the jacket for easier access.

Available with immediate effect and included in the rental concept VIKING offers, the VIKING YouSafe™ Crew Pro could replace existing lifejackets as agreements came up for renewal, said McManus. Only certified staff and approved facilities would service the new lifejacket with EBS.

VIKING establishes safety hub for US offshore wind in Virginia