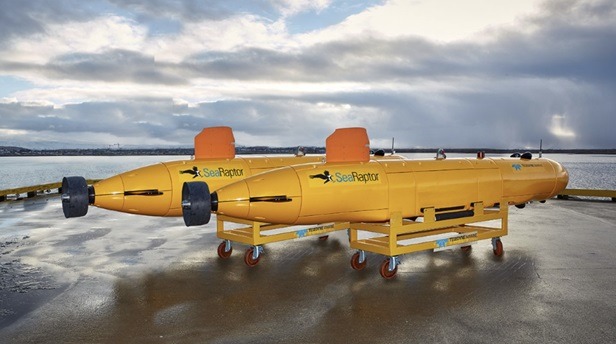 Kraken Robotics Inc. ,Canada’s Ocean Company™, is pleased to announce a second purchase order for 6000-meter rated AquaPix® MINSAS 120 sonars from Teledyne Gavia. This second order follows an order announcement that Kraken made on April 28, 2021, where we were unable to announce the customer at that time. While we cannot provide the specific amount of these orders to Kraken, they total between $1.75 and $2.0 million. Kraken expects to fulfill these orders in 2021.

Teledyne Gavia’s Autonomous Underwater Vehicle (AUV) customer is Argeo AS, a European survey company who recently press released their two SeaRaptor AUV orders. According to Argeo, they intend to have the two AUV systems work in parallel for projects requiring larger seabed footprint and productivity, focusing on deep water projects and campaigns. The SeaRaptor is a survey-grade deep water AUV designed to operate at abyssal depths and is depth rated up to 6000 meters. SeaRaptor supports a variety of applications, such as search and recovery, salvage, exploration, construction support, deep sea mining, marine archaeology, and oceanography.

These purchase orders follow initial integration and sea trials of Kraken’s AquaPix® MINSAS at Teledyne Gavia facilities in Iceland in the summer of 2020. Kraken’s AquaPix® MINSAS is an off the shelf configurable SAS which replaces high end sidescan systems at an affordable price, while delivering significantly higher resolution, range, and area coverage rates (ACR). The increased range and resolution and associated higher ACR of SAS over traditional systems can significantly expand the capabilities of Teledyne Gavia AUV systems for a variety of tasks for naval, scientific, and commercial applications. The man-portable Gavia class vehicles will utilize the MINSAS 60 system while the larger Osprey and SeaRaptor AUVs are capable of carrying the larger MINSAS 120 configuration. Kraken’s MINSAS is capable of 2 cm x 2 cm Ultra High-Definition SAS imaging which is ideal for stringent requirements of marine mineral surveys.