Baglietto Navy, military division of the historic shipyard based in La Spezia, announces the commercial partnership with MST Group 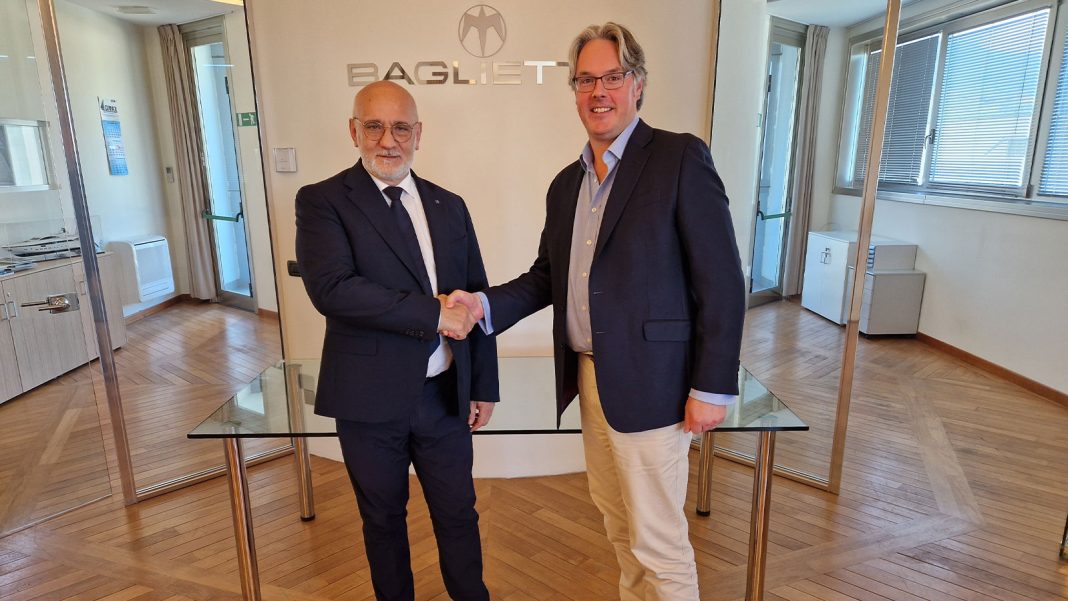 Baglietto Navy, the military division of the historic shipyard based in La Spezia, is pleased to announce the commercial partnership with MST Group, a company with headquarters in Bromborough (UK), specializing in the design and construction of military naval units up to 32m in length. The agreement was secured also thanks to the active collaboration of METCO METALS, in the person of Giuseppe Censabella, MST Group’s agent in Italy who will also be in charge of promoting and supporting Baglietto Navy’s specific commercial activities.

As part of their partnership, the two companies will exchange and share skills and technologies and provide service and support in their respective offices. This joint venture will also enable both companies to take part in tenders launched by Italian and/or foreign entities operating in Defence (Port Captaincies, the Carabinieri police force, etc.) for the construction of boats up to 12 metres long and vessels having sizes that do not fall within the two boat builders’ specific core business.

In order to offer the best possible assistance at its headquarters, Baglietto will make available a dedicated team and part of its infrastructure specifically to support MST in all commissioning and final delivery operations of Italian supplies.

“I am extremely pleased with this agreement – comments Baglietto CEO Diego Michele Deprati – as it marks an important step forward for our shipyard in the military sector, it allows us to further develop our skills, and it opens up new opportunities in a segment in which Baglietto has always been a reference player since its origins”

Philip Hilbert, Sales Director of MST Group comments; “We are absolutely delighted and honored to be partnering with Baglietto Navy which is part of the most prestigious and long-standing brand in the industry. This agreement further cements our respective positions as leaders in our sector and when combined will produce world class vessels for the Italian market”.

About Baglietto Navy
Baglietto: a long tradition in the military sector. Many important pages of Baglietto’s long history have been written in the military sphere. Starting in World War I, research and development in this sector strongly contributed to the brand’s growing prestige and positioning, soon making it a market leader. Thanks to its cutting-edge technology and top skills in aeronautics and fast hulls, over the years the Italian boat builder has become one of the main suppliers of Italy’s defence institutions and the designer of crafts chosen by the Police forces and Coast Guards of many countries in the Mediterranean basin and beyond: from MAS (torpedo-armed motorboats) in World Wars I and II to VAS (anti-submarine warfare patrol boats), all the way to the minesweepers and patrol vessels built for many foreign Navies, Baglietto has made the history of military boat building. The Baglietto Navy division was established with the goal of taking forward the long-standing tradition of the brand, adapting its vast experience and advanced technology to state-of-the-art military applications.

About MST
Marine Specialised Technology Group (“MST Group”) is the world’s leading designer, manufacturer, and maintainer of Inflatable, Rigid Hulled and High-Speed Workboats up to 32m LOA for global defence and security markets. Established in 2002 the company operates from a 26,500m2 Shipyard on the River Mersey in the Northwest of England and utilising state of the art 3-dimensional computer aided design, engineering, and naval architecture to develop ground-breaking designs. Examples include the world renowned FRISC® modular mission configurable 9m & 12m RHIB series that are already combat proven with multiple Navy and Special Forces organisations since 2012, the Subskimmer® fully submersible special operations craft and the HPB™ range of fully enclosed Patrol Boats in service with the United Kingdom Royal Navy. Through hard work and dedication, the company has earned an enviable reputation for high-quality products and services for the most demanding of applications and end-users.