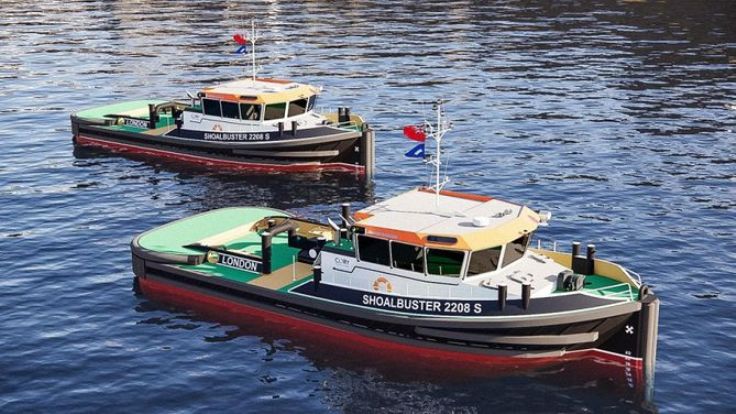 Cory, one of the UK’s leading waste management and recycling companies, has placed an order for two additional Damen Shoalbuster 2208S multi-purpose workboats to join its existing fleet

The vessels will be used to maneuver the barges that transport waste down the River Thames to Cory’s sorting facilities for either recycling or energy recovery.

The new vessels will join four Shoalbusters 2208S that Cory Group bought ten years ago to undertake the same role. They will look similar to their counterparts but will feature a wide range of updates and upgrades. These include being IMO Tier III compliant with compact Selective Catalytic Reduction systems fitted to fuel-efficient MAN engines to minimize NOx emissions. The fender arrangement is also being upgraded to provide all-round protection to the topsides as they manage their barges. The River Thames is the UK’s busiest waterway and is known for its strong currents and restricted space for maneuvering.

The upgrades on deck will be mostly safety-driven and focus on improving the use of space, such as lowering the layout of the bulwark and pushbow to give improved views forward. The bow thrusters will be electrical, powered by three generators with a triple load parallel running system. This will deliver redundancy, be more compact and be easier to maintain.

The order is part of Cory’s growth plans, with construction on a new Energy from Waste (EfW) facility due to begin next year. ‘Riverside 2’ will be Cory’s second facility, located adjacent to the current facility in South London, and will help address the critical need within London and the South-East for additional waste processing infrastructure. Once operational, it will be one of the largest and most efficient EfW facilities in the UK, processing 650,000 tonnes of non-recyclable waste and generating enough electricity to power 140,000 homes each year.

The new Shoalbusters will play an important role in ensuring that Riverside 2 is kept supplied with waste. They will be used intensively, and Cory Group’s decision to return to Damen for more of this proven design is testament to their reliability and efficiency. Both will be built at Damen Shipyards Hardinxveld and are scheduled for delivery prior to the EfW facility becoming operational.

Fran Comerford Cole, Director of Logistics at Cory, said: “As we continue to grow as a business, ensuring that our river-based fleet is of the right scale and capability is essential. We are pleased to be building on our existing partnership with Damen and drawing on their experience and expertise to make vital upgrades to the new tugs. As a business we are proud of our heritage on the Thames and our ability to take refuse trucks off the road through our use of the river, and these new vessels will allow us to continue to do so for many years to come.”

“We’re very pleased that Cory Group has awarded Damen with this contract to support their new, state-of-the-art, EfW facility,” added Frederik van der Linde, Damen Sales Manager UK & Ireland. “We are delighted to be contributing to such a significant project. Both vessels will be joining an impressive Damen fleet on the Thames in London and during operations they will be supported via the UK’s Damen service hub located in Portsmouth.”