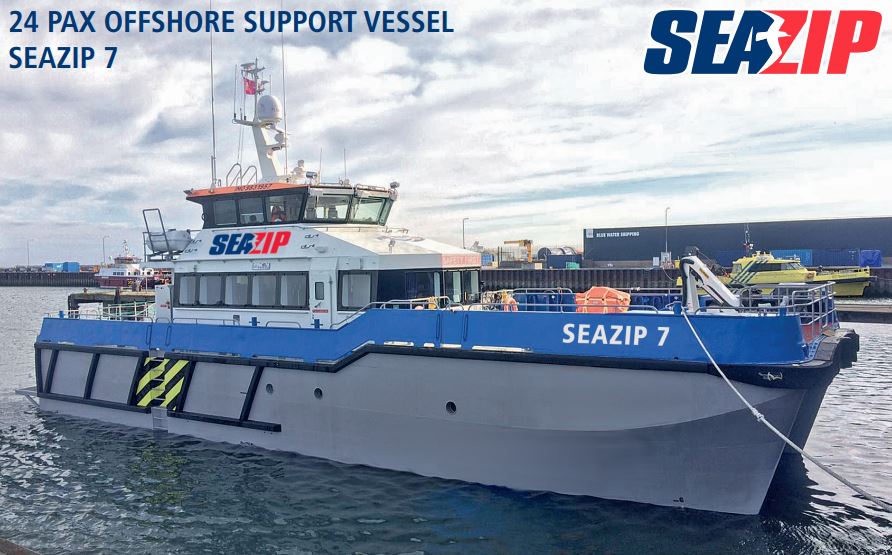 In addition to its existing fleet of 24 PAX CTVs, SeaZip Offshore Service has two additional crew transfer vessels available for the offshore energy industry as of 10 June 2022. The recently purchased 24 PAX jet propulsion CTVs were officially handed over to SeaZip Offshore Service in week 22. They are an efficient addition to the fleet, partly thanks to the jet propulsion technique. This makes the CTVs ideally suited for manoeuvring in shallow draft harbours.

SeaZip Offshore Service now has six of its own 24 PAX CTVs in service and also manages various offshore service vessels of third parties. At the beginning of this year, the capacity of the company’s own CTVs was doubled from 12 to 24 PAX in response to the demand for more flexibility in passenger capacity. Given the current dynamics in the market for sustainable offshore wind energy, it is essential to be able to transport both small and large groups of employees with the same CTVs.

‘Purchase of jet propulsion CTVs is an extraordinary opportunity’

With the purchase of the two CTVs, SeaZip Offshore Service anticipates this dynamic. The ships, renamed m.s. SeaZip 7 and m.s. SeaZip 8, were built in 2018 and are in top condition. The new construction of similar ships would require an investment of at least € 3.9 million and would take too much time in light of current market demand. Jan Reier Arends, managing owner of SeaZip Offshore Service, therefore considers the purchase of the 24 PAX jet propulsion CTVs as an ‘extraordinary opportunity to serve the offshore wind industry quickly and adequately’.

“With the doubling of the capacity of our existing vessels, from 12 to 24 PAX, and the capacity expansion now realized, we have taken another big step to accelerate offshore wind projects,” says Arends. “An additional advantage of the SeaZip 7 and SeaZip 8 is the drive technology. Jet propulsion CTVs can be optimally used in shallow water. So we can now also operate flexibly and efficiently in and from shallow draft harbours.”

The 24 PAX jet propulsion CTVs were officially handed over to SeaZip Offshore Service in week 22. For the purchase and financing, shipping company group JR Shipping, of which SeaZip is a part, managed to interest a small group of investors in a very short time. The CTVs sail for Wind Engine Marine, as WEM 1 and WEM 2. They enjoy an excellent reputation within the project market dedicated to the development and realisation of offshore wind farms.

Immediately after the transfer, SeaZip 7 and SeaZip 8 went into dock at shipyard partner Next Generation Shipyards in Lauwersoog. Both vessels will be operational as of 10 June 2022.