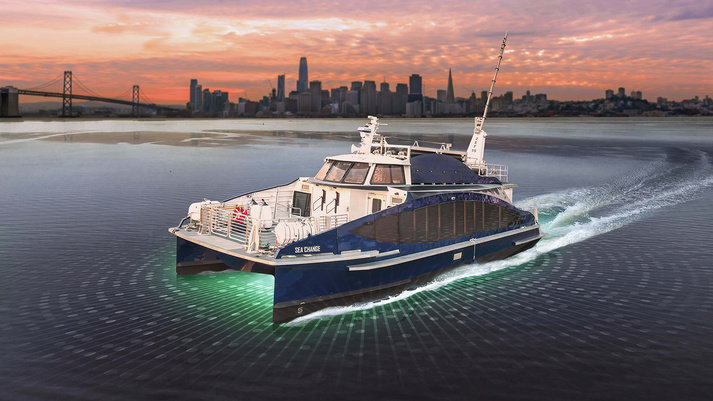 BAE Systems provided its HybriGen® Power and Propulsion solution to Zero Emission Industries for integration on the Sea Change vessel that will operate in the San Francisco Bay Area. The Sea Change project is funded and owned by SWITCH Maritime, an impact investment firm building the first fleet of zero-carbon, electric-drive maritime vessels for adoption by existing ship owners and operators.

BAE Systems’ propulsion system interfaces with a hydrogen and fuel cell system provided by Zero Emission Industries and lithium-ion batteries to power the vessel without the need for a traditional combustion engine. The all-electric system eliminates diesel fuel use and reduces engine maintenance to create a clean mode of transportation.

“We are committed to getting our customers to zero emissions with highly reliable and flexible systems that are proven on land and in the water,” said Steve Trichka, vice president and general manager of Power & Propulsion Solutions at BAE Systems. “This historic milestone is the next step on that journey, as we provide San Francisco with an innovative solution that reduces emissions and creates a new clean form of daily transportation for hundreds of commuters.”

BAE Systems worked with the vessel’s builder, All American Marine, and designer, Incat Crowther, after previously teaming with both companies on multiple projects. BAE Systems uses proven controls and components that have passed certification and inspection by the U.S. Coast Guard.

The project is also partially funded by a $3 million grant from the California Air Resources Board (CARB), administered by the Bay Area Air Quality Management District (BAAQMD), that comes from the California Climate Investments initiative, a California statewide program that puts billions of cap-and-trade dollars to work reducing greenhouse gas emissions, strengthening the economy, and improving public health and the environment—particularly in disadvantaged communities.

BAE Systems has been at the forefront of commercializing hydrogen fuel cell technology since first integrating fuel-cell powered buses in 1998. HybriGen Power and Propulsion brings that unrivalled capability to the water, as the system fully integrates into new or existing architecture on marine vessels. The system builds on 25 years of innovation and proven technology that powers more than 14,000 power and propulsion systems in transit and marine markets around the globe.