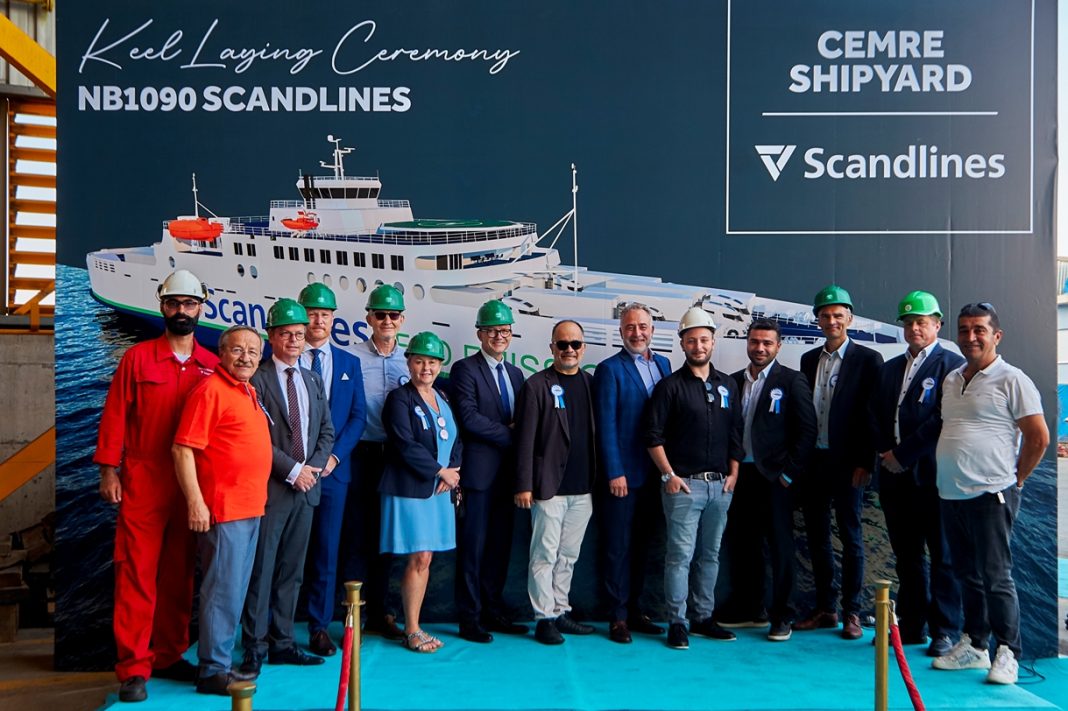 Scandlines celebrated the keel laying of its new zero direct emission freight ferry. The ferry will be inserted on the Puttgarden-Rødby route in 2024, thus carrying the working title PR24. It will launch the next generation of ferries on the route

30 August, Scandlines and Cemre Shipyard, Turkey passed a milestone in connection with the keel laying. Like other modern ships, the PR24 will not be built around a single keel but rather with a number of hull sections. Last Tuesday, the first block was placed on the slipway.

”The date of the keel laying is interesting because the ship has to be built according to the rules iand regulationsn force on that date. It is also a day associated with tradition, so of course we also placed a newly minted coin under the ship at the keel laying,” says Scandlines COO Michael Guldmann Petersen.

Climate and environmental issues have long been high on Scandlines’ agenda. As early as 2013, the ferry company invested in hybrid ferries with battery banks, and in 2024 the first emission-free ferry will be inserted on the Puttgarden-Rødby route. Only six years later, in 2030, the entire route will be emission-free.

The ferry can charge in just 17 minutes in Rødby. In 2019, Scandlines invested in a 50 kV / 25 MW power cable at Færgevej in Rødbyhavn. In spring 2023, work will start on extending this cable to the ferry berths, where a transformer and charging station will be installed.

With a crossing time of 70 minutes, the ferry is emission-free. It can also be operated as a hybrid ferry like the current passenger ferries on the Scandlines routes between Germany and Denmark. When operated as hybrid ferry, the crossing time is 45 minutes. Thus, the ferry can also be used as backup ferry if one of the four double-ended ferries that are currently operating the Puttgarden-Rødby route, is unavailable due to a yard stay.

The rebuilding of the terminals in Puttgarden and Rødby has already started. Berth 1 in Rødby will be converted into a lay-up berth for all five double-ended ferries. The free- standing part of the concrete bridge, which in 1970-1997 provided access for cars to the upper deck of the ferries, has been removed and a crane has pulled up the moving span.

As PR24 will be transporting lorries on both the upper and lower decks – as it is currently the case on the ferries operating the Rostock-Gedser route – berth 1 in Puttgarden and berth 3 in Rødby must also be rebuilt. This work is expected to start later this year.

”We are off to a good start, and we are sending a clear signal of continued focus on growth,” says Scandlines CEO Carsten Nørland.

Scandlines is a modern and innovative ferry operator with a green vision for the future. We have a proud culture based on strong German-Danish cooperation and maritime history dating back to 1872.

Scandlines operates two ferry routes with high capacity and frequency. Six of our ferries are hybrid ferries, and two are furthermore fitted with an innovative rotor sail – and that contributes to making our ferries greener.

Our core business is to provide an efficient and reliable transport service for both passengers and freight customers. The focus for all our activities – on board the ferries as well as in our BorderShops – is to give our customers a great experience.

With more than 38,000 departures on seven ferries, Scandlines in 2021 transported over 3.6 million passengers, 950,000 cars and around 720,000 freight units on the routes Puttgarden- Rødby and Rostock-Gedser.