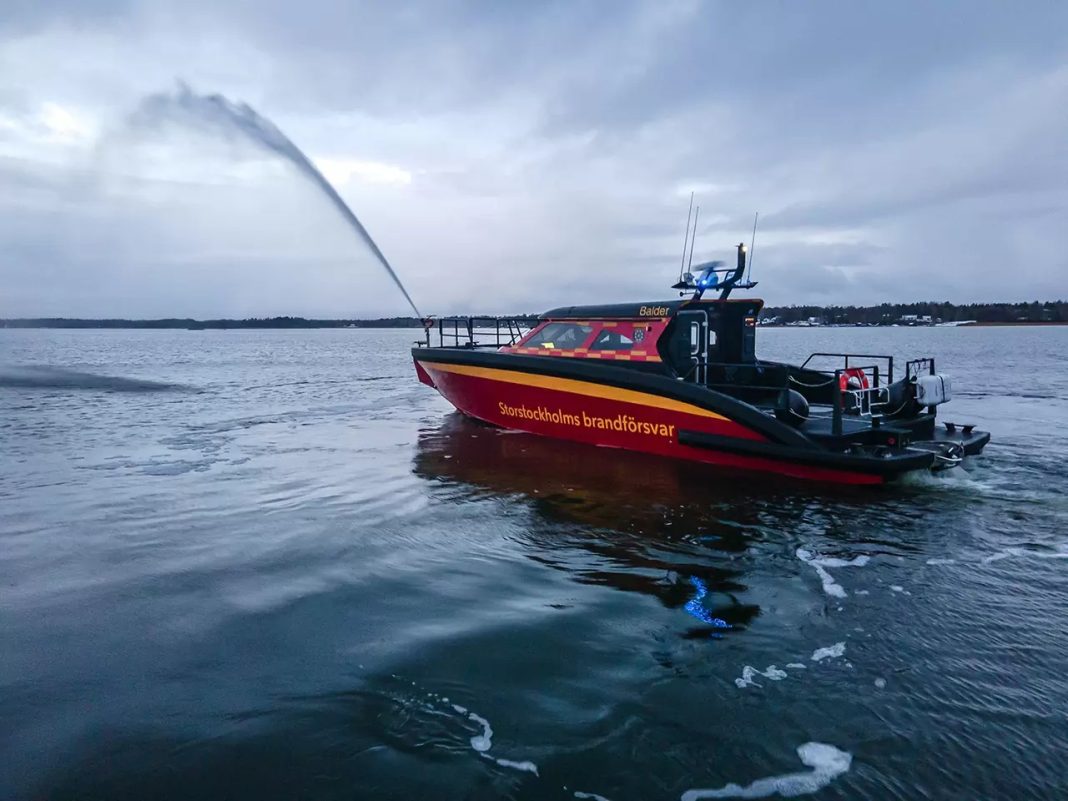 With increased demands for rapid rescue operations, both at sea and on land, the ‘Greater Stockholm Fire Brigade’ (SSBF) has now put its new fireboat Balder into service, in the middle of a bitterly cold winter. The boat’s ability to operate on hot summer days and during ice-free winters was one of many stringent requirements that had to be met.

Marell Boats Sweden won the public tender last year and has now delivered a fireboat with unique speed and performance characteristics. The M15 Balder fireboat is equipped with three Volvo Penta D6-440 DPI engines, with the mid-engine also used as a pump engine for the firewater system. Fully loaded, the Balder fireboat reaches a speed of around 45 knots, which means that the boat can get from Åkersberga fire station, which is its home port, to the archipelago in a short time. The capacity of the firewater system is 3000 litres per minute at 10 bar and the boat is equipped with a removable water cannon on the foredeck and two additional outlets for hose connections, one on the foredeck and one on the aft deck by the cabin. With the entire Baltic Sea as a water reservoir, firefighting can be done very effectively for a long time, both on objects in the lake and on land. With Volvo Penta’s joystick system, the boat can easily be kept in position with the outboard engines and drive while the mid-engine is completely decoupled from the propulsion.

The Balder fireboat is also equipped with a ramp at the bow for disembarking and for embarking people or a stretcher. A front stair hatch allows direct access to the bow with the stretcher, which means that the boat can be used for many different rescue operations around the archipelago. The large, low aft deck is used effectively for diving operations and oil spill response, such as the laying of bilges. The M15 Fireboat is built on Marell Boat’s efficient multi-functional platform, with a rigid and lightly powered aluminium hull and used in many different configurations, as a fireboat, patrol boat, tourist boat or tender boat.