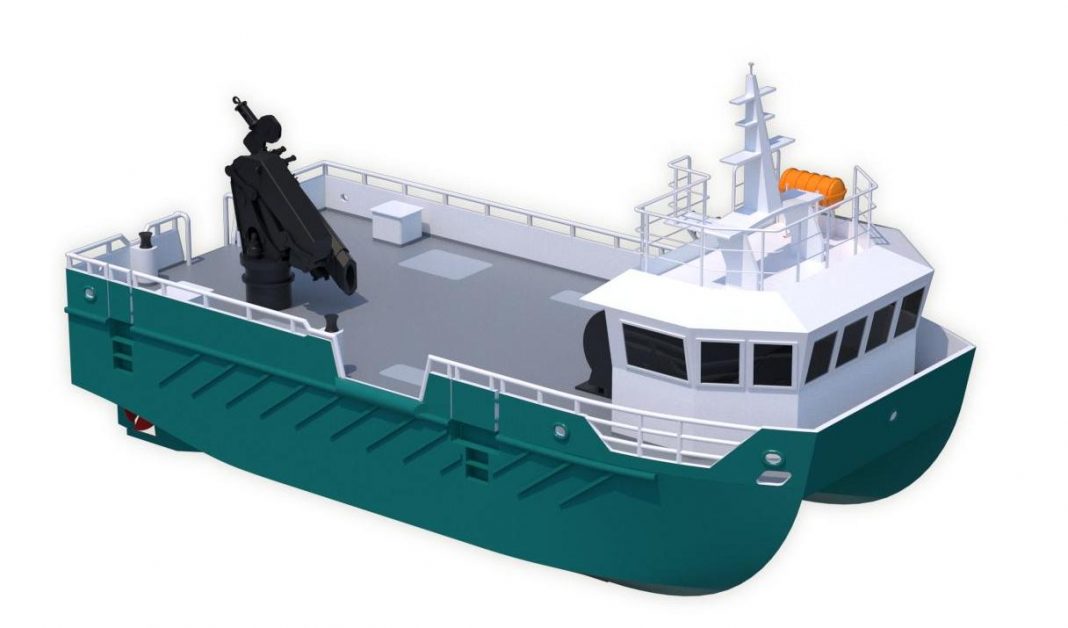 GLO Marine calls for more focus on hull optimization to support the uptake and further development of electric propulsion. This approach becomes relevant to enhance vessel operability and allow operators to extract maximum power and efficiency from e-motors and battery powerpacks.

The design office has recently completed a project to optimise the hull design of a 15-metre catamaran workboat with the ultimate goal of reducing the wave making resistance to a minimum, whilst keeping the vessel’s main dimensions unchanged. The work was performed using CFD methods and Numeca Fine /Marine software tools.

Discover our way of work and all the benefits of CFD analysis on small boats design.

Although still in its infancy, electric propulsion is here to stay. As with any new industry, the ‘introduction’ stage involves technological uncertainty and high capital needs, followed by the ‘growth’ and ‘maturity’ stages, where proven designs and lower costs bring the product into the mainstream.

Electric propulsion is still in the ‘introduction’ stage, where maximising benefits is driven by operability, and how and where these systems are installed, rather than by the actual product design process, currently limited by technology. This shows a real need for precision engineering to support emerging technologies.

With electric propulsion, it is of paramount importance to make sure that the limited power installed on board is directed towards meeting the vessel’s operability targets, rather than driving a weak hull design. And this is where an optimised ship design makes all the difference in the world.

Until recently, CFD-based hull optimisation was used mostly for larger vessels, where even a 2% reduction in fuel consumption over the vessel’s lifespan can have a big impact on overall operational costs. For smaller vessels, interest was minimal due to the smaller engines and shorter voyages.

However, this is changing with the growing adoption of electric propulsion, where any kind of savings in terms of power means smaller batteries for the same range or longer voyages for the same powerpack. And the centre stage is currently being taken by aquaculture support vessels and offshore wind farm CTVs in their search for economies.

CFD therefore has a role to play in a world where absolute accuracy in ship design can deliver major benefits and so support the growth of electric propulsion as owners see its benefits in financial as well as environmental terms.

In 2021 GLO Marine completed a project for MEST Shipyard in the Faroe Islands, which involved optimising the hull design of a 15m catamaran workboat, with the goal of reducing the wave-making resistance to a minimum while keeping the vessel’s main dimensions unchanged.

The cat is intended for aquaculture operations, specifically salmon farming, around the Faroe Islands. The owner had requested a vessel with a continuous sailing time of just over 10 hours at a service speed of 8knots, on a single charge.

Electric propulsion was the preferred option, resulting in zero fumes on the deck. Fish-farm operations are carried out when the vessel is either stationary or maneuvering at very low speeds. When diesel propulsion is used, this often results in the exhaust being blown over the crew.

Another benefit is that electric propulsion results in low engine noise: a benefit for the crew but also for the fish, as this greatly reduces their stress levels.

The work for the catamaran was performed using CFD methods and Numeca FINE/Marine software tools. Correct set-up of CFD runs is crucial to properly simulating the water flow around the hull and generating reliable results, with the focus being on creating the right mesh distribution to balance accuracy on one hand, and computational time on the other.

The mesh was optimised to follow the vessel’s own wave pattern, whilst taking all measures such that the mesh density was constant between the various hull shapes tested. This gave GLO full confidence that any difference in forward resistance was the result of the hull optimisation and not because of a mesh variation.

After careful attention was paid to the hull extremities and trim, the enhanced hull showed obvious improvements in terms of its own wave pattern and a reduction in forward resistance by almost 10% compared to the baseline case was achieved. This allowed for approximately one hour’s extra sailing time at the service speed of 8knots.

With a process where both computational power and time cost money, GLO’s mesh of 5 million cells achieved an intersection of 12 hours of computational time for each variation on a 32-core machine that delivered accurate depictions of the flow of the water around the hull.

For the analysis, the computer-generated vessel was trimmed by 2° aft (0.5m trim) to replicate normal operating conditions, and accelerated to 8knots, corresponding to the vessel’s service speed. The CFD analysis was then conducted across eight variations of the hull shape, with the aim of optimising the areas which had major variations in their hydrodynamic pressure coefficients and thus had the largest impact on generating resistance to waves.

The analysis proved conclusively that continuous waterlines with no inflection points and no hydrodynamic shoulders yielded the greatest benefits for this particular design. Implementing these findings delivered an optimised design that returned a 10% reduction in forward resistance compared to the baseline design.

These performance upgrades were achieved without altering the vessel’s main dimensions, through small changes that made big differences. These included optimising the entry angle of the water plane area and the forward profile. The optimised hull shape kept the same draught as the baseline hull, whilst the displacement was altered just a fraction of its original value; a reduction of 2.3% as a result of the slimmer fore extremity shapes.

The entire CFD process was developed and managed by a mixed team of hydrodynamics engineers and hull designers, to ensure that all hull modifications could be implemented and carried out safely throughout the construction phase. Successful initiatives like this one can have a longer lasting and broader impact on the industry by instilling trust that electric propulsion can meet operational expectations, allowing this technology to gain more traction and higher adoption rates. GLO Marine has dealt with more than 100 catamaran workboats to date, solving various engineering challenges, from stability to hull optimisation and onboard arrangements.