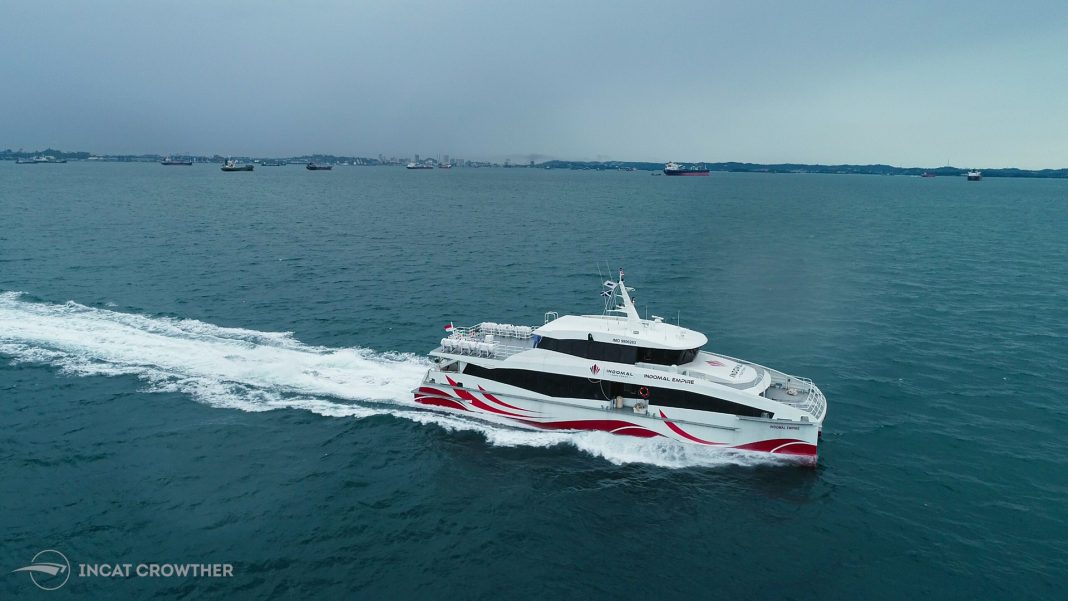 Incat Crowther is pleased to report on the successful entry into service of Incat Crowther 30 Indomal Empire. The 255-seat passenger ferry is operating services on the Malacca Strait between Indonesia and Malaysia and has been performing well in demanding conditions.

Built by PT Cahaya Samudra Shipyard in Batam, Indonesia, Indomal Empire is operated by Indomal Express, requiring compliance with local rather than international regulations.  Indomal Empire was specifically developed to cater to a segment of the market demanding lower ticket prices and subsequently less complex and yet still very capable vessels.

Indomal Empire has a functional layout of forward-facing seats over two decks and is outfitted to a high standard. Midship entry doors on the main deck provide a central boarding position in direct proximity to stairs to the upper deck. Luggage racks are fitted here and at the forward end of the cabin. The main deck seats 207 and has three bathrooms aft.

The upper deck is full width and affords a good outlook around the wheelhouse and to the sides. 48 passengers are accommodated, with a single toilet aft. A collection of outboard seats are provided with tables.

Indomal Empire is powered by twin 2 x MAN D2862 LE483 main engines, easily propelling the vessel to a top speed of 30 knots. Propulsion is via a pair of ZF 3050 gearboxes to fixed-pitch propellers.

Indomal Empire’s success has resulted in orders for three additional vessels, with further vessels scheduled for construction as ‘stock’ vessels for general sale.