Navigating to zero with Ports of Auckland 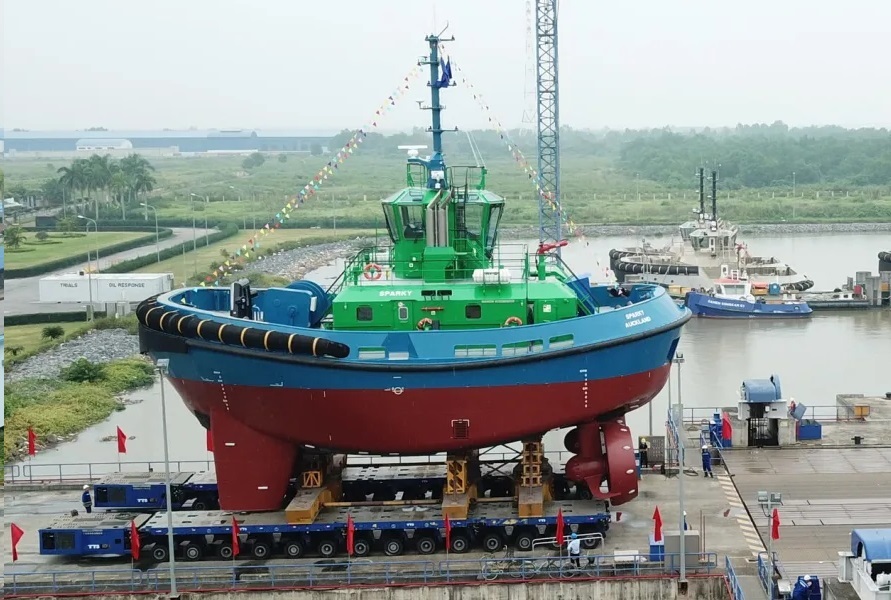 Ports of Auckland Limited (POAL), New Zealand, will shortly be taking delivery of Damen’s first all-electric tugboat that will be fully capable of handling even the largest vessels. While New Zealand is a long way from the world’s shipping centres it should come as no surprise that one of its largest ports should be taking a leading role in sustainable technology. With its pristine environment and unique ecosystems on the edge of the Southern Ocean, New Zealand is renowned for its commitment to sustainable development.

POAL handles around 1,400 commercial vessels and cruise ships each year. 60% of New Zealand’s imports and 40% of its exports pass through its gates, including 820,000 TEU of containers. Its new, ground-breaking tugboat is a Damen RSD-E Tug 2513 named Sparky, and what makes it so special is that its Damen E-Drive has enough battery capacity to perform at least three berthing operations on average on batteries alone. During these operations it can push and pull with 70 tonnes of force for at least 30 minutes after which it takes just two hours to fully re-charge the batteries using a shore charge station. This means that the majority of operations can be performed fully electric with zero-emissions. The RSD-E 2513 is also fitted with IMO Tier 3 certified firefighting gensets that can be used to charge the batteries when shore power is not available, or to charge the batteries extremely fast in combination with shore power. They can also provide direct back up for the propulsion system, generating a bollard pull of 40 tonnes.

Why an all-electric tugboat?

So how did POAL arrive in this position as a global leader in sustainable shipping? POAL’s Allan D’Souza, General Manager Marine and Multi-Cargo Operations, takes up the story. “It began with our previous CEO, Tony Gibson, who led the Port to develop a sustainability strategy which included an ambitious target to eliminate our carbon emissions completely by 2040. I knew that any new assets ordered from then on with life spans of at least 25 years, such as tugboats, needed to be zero emissions capable. While such a tug did not yet exist, we saw it as important to show that POAL was serious, and so in 2016 I started looking at options for electric tugboats.”

In the months ahead Allan talked to many designers and leading yards, not only in New Zealand but also overseas including the Far East and Europe, Damen included. The general feedback was that it just wasn’t feasible at the time. “One yard told me I was dreaming,” Allan recalls, “but I decided to keep pushing and see what options might be possible. Damen was happy to keep talking and, in 2017, they agreed to look at it in detail and explore all the possibilities.”

The key challenge was how to get all the equipment for the E-Drive into a hull with the batteries taking up so much space, especially as POAL required that the tug had to be just 24 metres in length, for two-person operation. A lot of initial drawings and plans later, a Letter of Intent was signed so the design and engineering could move to the next level and finally, in 2019, a contract was signed for what would be Damen’s first full-sized, 70-tonne bollard pull, electric tugboat, to be built at Damen Song Cam Shipyard (DSCS), Vietnam.

It hasn’t all been plain sailing since then. After all, this project does involve the first of a new and highly innovative series. “Over 80 changes were made to the original specification, but they were all made in good faith,” says Allan. “It was a big learning process for all, with challenges along the way, but it has all been amicable and in the spirit of getting it done, and we hope that it will provide a template that others can use.” He is also grateful for the wholehearted support of the POAL’s Board of Directors and the company’s owner, Auckland Council, all of whom realised the importance of taking a stand in this way and by doing so reaffirming New Zealand’s commitment to sustainability.

Part of a bigger sustainability picture

New Zealand is fortunate in that more than 80% of the country’s electricity is already renewable, mainly generated using hydro and geothermal resources. For POAL it means that their new tugboat is doubly sustainable, as it will be charged using the Renewable Energy Certified supply of electricity that POAL purchases for all its operations, and this makes it even more attractive to Allan and his colleagues. However, it is only part of a bigger move to increasing sustainability across every part of their operations.

In 2014/15 they began the process of converting all the lights in the port to LEDs, resulting in cost savings of 60% as well as a reduced carbon footprint. In the same year they also pioneered the use of catamarans as pilot boats, something new in New Zealand, which cut fuel consumption as well as providing stable and safer platforms for the pilots.

More recently the port has been working with Auckland Transport and others, trialling a hydrogen refuelling facility within the port, currently for just cars and buses, but with plans for including trucks and heavy plant in the near future. If this is a success, the port intends to accommodate a full-scale hydrogen refuelling facility with the goal of using hydrogen to power all its heavy machinery.

“We have a dedicated General Manager for Sustainability now,” says Allan, “and other projects that she is working on include trialling renewable diesel for our fleet of tugboats and pilot boats, as well as shore machinery. It will also be used in Sparky’s backup generators to deliver continuous zero-emission operations.”

They have recently had their emission reductions targets verified and accepted by the Science Based Target Initiative and are also looking closely at the sustainability of their waste management, both their own and their suppliers, and also wider procurement issues. “The port is serious about its message,” continues Allan. “We see our role as being an encourager to others, providing leadership in this area, particularly those with whom we spend a lot of money. And while it is important to give them plenty of lead time and see it from their point of view, 2040 is not that far away.”

It is a message that they seem to be getting across, and not just in New Zealand. Sparky has been receiving a lot of interest despite Vietnam’s tough quarantine requirements. POAL’s studies are showing that, for their operational profile, electric tugboats will deliver annual savings of 15% on operational costs and 10% on maintenance, and that’s apart from their environmental benefits! POAL can expect many more visitors once Sparky reaches Auckland and starts showing the world its full potential!