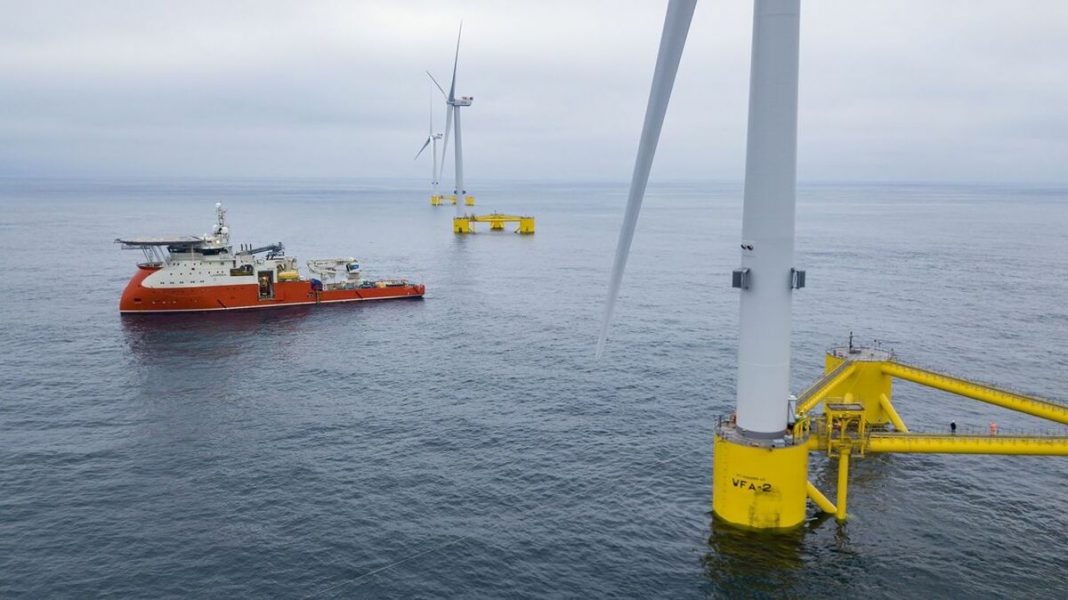 Welsh waters are on track to play a growing role in the UK’s Net Zero transition with:

The Crown Estate, as manager of the seabed around Wales, England and Northern Ireland, has awarded seabed rights to developers Blue Gem Wind, for the proposed 96 MW Erebus  floating wind demonstration project, in the Welsh waters of the Celtic Sea, approximately 44km from shore. This is the first time that rights have been awarded for floating wind in Wales, marking a significant moment for the Welsh offshore wind sector.

The project comes forward as part of The Crown Estate’s ongoing Offshore Wind Test and Demonstration opportunity, designed to facilitate pre-commercial innovation through the trial of new and emerging technologies in live conditions. Floating technologies, which are better suited to deeper waters than traditional ‘fixed’ foundations, are set to play a key part in the sustainable future of UK offshore wind, unlocking new areas of seabed.

The award of seabed rights, known as an ‘Agreement for Lease’, will allow Blue Gem Wind (a joint venture between Total and Simply Blue Energy) to progress with environmental assessments and surveys, secure access to the grid and seek planning consent through the statutory processes.

Today’s announcement builds on two further significant offshore wind developments in Wales. The first is The Crown Estate’s award of seabed rights for the proposed extension to the Gwynt y Môr offshore wind farm (known as Awel y Môr), located off the coast of North Wales.  Once consented, the extension could deliver up to 576 MW of capacity, adjacent to the existing project, supporting Wales in delivery of its net zero ambitions and bringing further benefits to the local community.

The second, confirmed last year, is the inclusion of areas of Wales’s seabed in The Crown Estate’s Offshore Wind Leasing Round 4 – the first major UK leasing round in a decade. The Northern Wales and Irish Sea Bidding Areas is one of four seabed areas that have been made available to the market as part of the Round 4 process.

Projects from Leasing Round 4 will be identified later this year, as part of a competitive tender process, and subject to an environmental assessment, could be awarded rights in 2021. Once consented and developed, Round 4 projects could be operational as early as 2030.

Will Apps, Head of Energy Development at The Crown Estate said: “Welsh waters are home to a thriving offshore wind industry and as this continues to evolve and mature, innovation will be vital to unlocking a sustainable pipeline of new capacity over the longer term.  With an increasingly busy marine environment, we need to explore new technologies in more diverse and technically challenging areas which is why we are delighted to see the Erebus Project take this important step”

Minister for Environment, Energy and Rural Affairs, Lesley Griffiths, said:  “The climate emergency means we will need much more renewable energy to meet our needs, and Welsh Government has supported the development of marine energy for many years.  I am pleased to welcome this next step in harnessing the potential for energy identified in the recently published Wales National Marine Plan. We will continue to ensure projects bring sustainable jobs and investment to Wales whilst delivering on our legally binding climate commitments.”

Hugh Kelly, Project Managing Director of Blue Gem Wind, said: “We are incredibly pleased to sign the Agreement for Lease for Erebus. This first project in Wales will begin to unlock the significant potential of floating wind in the Celtic Sea. It is the first of the stepping-stone projects required to launch a new chapter in the development of offshore energy in the South West; a new industry that can deliver significant benefits for the local supply chain and the coastal communities of Wales and the wider UK.”

Norside Buys The Platform Supply Vessel “Farland” And Will Convert It For The Offshore Wind Industry.