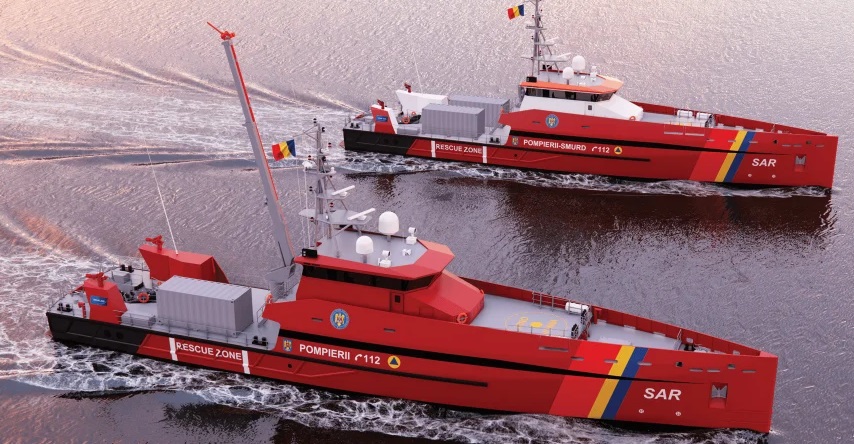 The General Inspectorate for Emergency Situations of the Romanian government has ordered two Damen Stan Patrol 5009 emergency response vessels. The contract was signed by Inspector General Iamandi, in the presence of Minister Lucian Bode and Secretary of State Raed Arafat at the Ministry of Internal affairs in Bucharest on October 10th. Romania sets to upgrade their fleet for emergency response significantly by this order.

The order is the finalizing of an extensive tender process that the Romanian government issued from the ‘Vision 2020’ project that aims to improve Romania’s disaster-response capacity by purchasing new equipment and training staff, aiming to better protect its population in emergencies. This program aligns with the national strategy on climate change and economic growth based on low emissions. Damen Shipyards won the tender process with the proposal for delivery of the two Stan Patrol 5009 vessels.

From left to right at the table: Damen Sales Manager Stephan Stout and Inspector General Dan Paul Iamandi.
From left to right standing behind them: Ambassador of the Kingdom of the Netherlands to Romania Roelof van Ees, Minister Lucian Bode and Secretary of State Raed Arafat from the Ministry of Internal Affairs.

The Search and Rescue Multirole Vessels as requested by the Romanian government and engineered to specifications by Damen, will be able to complete missions up to three days in rough seas and adverse conditions. The range is at least 2000 nautical miles at cruising speed. One vessel is a Search and Rescue Multirole Ship with emphasis on medical aid, while the other is a Firefighting Multirole Ship, equipped to stop fires at vessels and platforms at sea. The first can evacuate at least 50 people from emergency situations, while the firefighting vessel is laid out to take at least 30 people on board. It has FiFi-1 notation. Multiple spray nozzles for firefighting are installed, one of them on top of a hydraulic arm to reach high and far in order to be able to direct the water into the heart of a fire. Both vessels have a winch area for touch and go helicopter operations, rescue boats that can be launched fast, have the ability to launch drones and waterborne unmanned vehicles and are extensively equipped with communication and navigation instruments to participate in extensive missions with other vessels, vehicles and aircraft. The instruments enable rapid detection of objects and people in the water for emergency response. Both vessels can maintain a top speed of 22 knots. They will be finished and equipped at Damen Shipyards Galatí.

Delivery of the previously ordered vessels by the Romanian Border Police, two Damen Fast Crew Supplier 4008 Patrol is foreseen at the end of 2022.