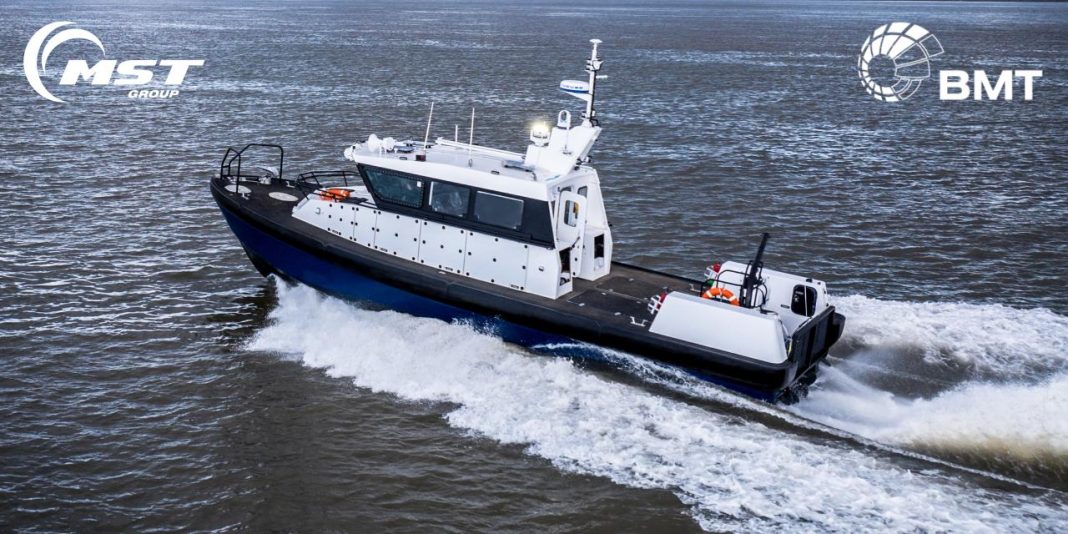 Awarded in March 2021, The Police Patrol Craft (PPC) contract is a six-year programme that will see delivery of eighteen state-of-the-art patrol craft to various Police units around the UK and Gibraltar.  The Patrol Craft will be used to ensure protection of major Royal Naval Assets, including capital ships and submarines, as well as installations in and around UK dockyard ports, Gibraltar Naval Base, and wherever else necessary.

The launch of the first craft is a major milestone coming some 18 months after contract award. The first part of the contract has seen the craft design being completed by MST’s design partners BMT who carried out the vessel design, with the build of the craft being completed at MST’s new shipyard facility on the Wirral.

After a successful setting to work phase, the craft was launched on to the River Mersey from MST’s slipway in Bromborough and will now go through several weeks of trials before being presented to MoD Defence Equipment & Support (DE&S) for acceptance. In the early part of the first craft’s life, it will primarily be used as an educational platform, firstly for MST to provide training to the MDP Training Team.  From here, MDP Trainers will then be able to provide high-level guidance and support to officers who will crew and operate each craft that enters service.

Craft 1, named Osprey, will be closely followed by a new sister craft on a rolling 3-month programme, with the second craft anticipated to be delivered in the early part of 2023.

MST & BMT design and engineering teams worked closely ensuring that the HPB DNA flowed throughout this new design, resulting in a technologically advanced craft, from hull construction to the capable on board C4iSR systems. All a testament to the skills and expertise this exciting partnership brings to the patrol boat market.”

Martin Bissuel, Business Sector Lead at BMT Specialised Ship Design commented: ”The first launch is a very important milestone in this programme. It is the result of many months of hard work, innovation, and close cooperation between the BMT and MST teams to design and build a vessel that will offer outstanding capability to the users. We look forward to supporting the build of the rest of the fleet, both from a vessel design point of view as well as providing the ILS elements which are so critical to the required high levels of in-service availability required.”

Marine Specialised Technology Group (“MST Group”) is one of the world’s leading companies specialising in the new build, refit and repair of boats up to 32m in length. Operating from two sites in the Northwest of England, the company serves global defence, security, search & rescue and workboat markets.

Through hard work and dedication, the company has earned an enviable reputation for high-quality products and services for the most demanding of applications and end-users.

BMT is a leading international design, engineering, science, and risk management consultancy with a reputation for excellence. We’re driven by a belief that things can always be better, safer, greener and more efficient.

We provide our customers with the capability, capacity, and confidence to enable them to make the right decisions at the right time by drawing upon the expertise of over 1,500 professionals located in Europe, Asia Pacific, Australasia and the Americas.

Delivering independent, complex design and consultancy capabilities for over 30 years, we pride ourselves on being equipped to support our clients to tackle the most complex design and systems issues, and challenges, which enables the industry to deliver safer, cleaner and more fuel-efficient shipping for the future. We draw upon a wide range of experience and expertise to provide high-quality, high value products and services across the maritime sector.

Seatools and Degra team up to introduce AHC winch offering