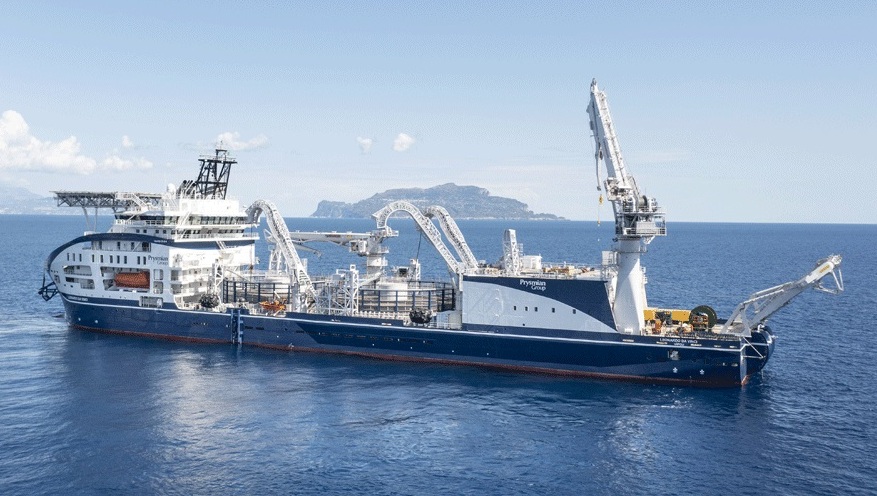 Prysmian Group, world leader in the energy and telecom cable systems industry, announces an investment of approximately €200 million in a new cutting-edge cable-layer plus adjustment for cables equipment of approximately €40 million. The new vessel will be fully operational by Q1 2025 and will reinforce Prysmian’s project execution capabilities and its EPCI (Engineering, Procurement, Construction, Installation) approach.

As for Leonardo da Vinci, the new vessel will be built by the VARD Group (a subsidiary of the Fincantieri Group), one of the world leaders in the design and construction of specialised vessels for the offshore market, and will stand out for its technical performance, operational flexibility and sustainability. The new cable-laying vessel will be very similar to Leonardo da Vinci, which was delivered in 2021 and exceeded all expectations in its first year of operations, being fully recognised by the market as the best-in-class vessel to meet the growing demand of the submarine cable industry.

“The development of more efficient and sustainable power grids infrastructure is key to enable the energy transition, and submarine cables are an essential component. As global leader we are fully committed to technology innovation and we are happy to partner with worldwide leaders in the construction of vessels like Fincantieri and Vard to improve also our installation capabilities” stated Valerio Battista, CEO Prysmian Group.

Pierroberto Folgiero, CEO of Fincantieri, said: “The complexity of such a ship fully demonstrates Fincantieri’s ability to ensure its customers technological excellence, constant innovation and commitment to sustainability. Indeed, the highly demanding context in which the vessel will operate, both in terms of environment and hi-tech requirements, will enhance the sophisticated latest generation onboard systems. We are therefore particularly pleased to serve Prysmian – once again – with a successful project in a sector such as the cabling one, while supporting energy transition, which will attract investments in the near future”.

With substantially the same hull of Leonardo Da Vinci, a length of approximately 170 m and a breadth of about 34 m, the new cable-laying vessel will also be equipped with a similar cable installation equipment, , such as: a first laying line with a capstan suitable for deep water installation at over 3,000 m; a second independent laying line with linear cable engines in order to increase operating flexibility; 2 carousels of 7,000 and 10,000 tonnes, which ensure the highest cable loading capacity in the market, enabling a reduced transportation time from the factory to the site, for an overall improved project efficiency. The bollard pull will be in excess of 180 tonnes conferring the capability to perform complex installation operations and supporting a variety of burial tools. The vessel will be equipped with state-of-the-art DP3 positioning and seakeeping systems, while the maximum transit speed will exceed 16 knots. Like Leonardo da Vinci, the new vessel will have green credentials: the high cable load capacity and navigation speed will significantly reduce the number of cable installation campaigns needed, compared to other vessels, thus enabling an overall decrease in CO2 emissions and a reduction in fuel consumption of approximately 40% compared to a traditional cable-laying vessel. Moreover, the very efficient and green engines will cut NOX emissions by 85%, allowing the cable-layer to comply with the most stringent international environmental requirements. In addition, the new vessel will be equipped with a battery pack for a total power of 3 megawatt.

“The new vessel will be definitely a game changer in strengthening our installation capabilities and supporting our leadership position in the interconnection and offshore wind farm markets, while ensuring on-time delivery and execution. This new vessel is in addition to Leonardo da Vinci and the other cable-laying vessels in our existing fleet, and from now on it will support the Group’s long-term growth in the submarine cable installation business, which is constantly evolving,” underlines Hakan Ozmen, EVP Project BU, Prysmian Group.

Prysmian can count on a fleet currently composed of five state-of-the-art cable-laying vessels: Giulio Verne, its former flagship with a track record of about 35 years of cable installation projects; Cable Enterprise, a very versatile DP2 vessel, mainly used for installation of offshore wind farm export cables; Ulisse, an efficient barge for shallow-water installation; Barbarossa, a small barge, recently added to the fleet and specifically designed for operations in very shallow water and intertidal zones; and Leonardo da Vinci, the world’s most advanced cable-laying vessel that became operational in the summer of 2021. Prysmian has also the widest range of high–tech burial equipment, including Hydroplows, HD3 Ploughs and Post Lay Burial machines (Sea Mole, SeaRex and Otter).

Once operational, the new vessel will be dedicated to the execution of important projects such: as Dominion Energy, the largest submarine cabling project ever secured by Prysmian in the USA; the Neuconnect Energy Link project, the first power cable connection between the UK and Germany; and the Dolwin4 and Borwin4 projects, two offshore wind farm grid connection cable systems in Germany.