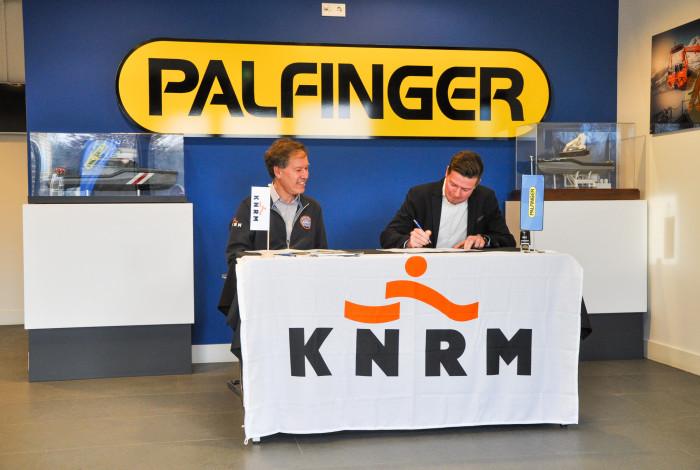 The Royal Dutch Rescue Society (KNRM) is having a new series of lifeboats built by PALFINGER. On Thursday 20 January, the KNRM and PALFINGER signed the contract for the delivery of twelve 7.5 meter aluminum Rigid Inflatable Boats (RIB). The construction involves an investment of 2.67 million euros. This is financed from legacies and contributions from donors of the KNRM.

After a careful preliminary phase, the KNRM awarded the contract to PALFINGER because of the complete package they offer in the field of quality, engineering, pricing and project management. PALFINGER is part of the Austrian company PALFINGER AG, which is known, among other things, for the construction of car and maritime cranes. In addition, they develop and build boats for the professional maritime world. PALFINGER builds the twelve boats for the KNRM entirely at a yard in Harderwijk.

“Reliability, safety and quality of our equipment is very important to the KNRM, because our rescuers voluntarily risk their lives for others. We are confident that with the 7.5 meter RIB, made by PALFINGER, we offer our rescuers the best boat offer that is available in this class.”

“PALFINGER is very pleased, but above all honored with the award of the twelve lifeboats by the KNRM. Our team has always followed the KNRM and its activities with great passion, respect and pride, with the aim of supporting its employees and all volunteers with the most reliable and safe boats in the near future.

This prestigious project concerns the joint development of a new standard for 7.5m aluminum RIB boats. In addition to our focus on quality and safety, PALFINGER will pay particular attention to improving the ergonomics of the users in order to minimize physical complaints during harsh conditions. PALFINGER is very much looking forward to working with the KNRM and is grateful for the trust placed in our organization.”

The first RIB is expected to roll off the yard at the end of 2022. After that, the KNRM will extensively test the boat at various rescue stations for three months. If the boat meets all expectations and quality requirements set by the KNRM, PALFINGER will start building the other eleven boats.

The 7.5 meter long lifeboat is a new and own design by PALFINGER, with an explicit focus on the sailing characteristics of the Atlantic 75 in the current fleet. The lifeboat has room for three crew members and twelve rescued people. Two Yamaha VMAX 115 HP 4-stroke engines give the lifeboat a speed of at least 32 knots.

The construction of the new 7.5-metre RIBS is part of the broader plan to replace the entire KNRM rescue fleet of 75 boats over the next fifteen years. The current KNRM lifeboats were built between 1991 and 2016 and the oldest boats need to be replaced. The replacement of the total fleet will cost about 83 million euros.

At the end of 2020, the KNRM has already started building the new “Van Wijk” series. The first ‘Van Wijk’ made her sea trials at the end of 2021 and will be deployed in the course of 2022. This series of boats is named after a testator who left money specifically for the construction of a new type of lifeboat. The KNRM expects to find a proud name giver with fundraising activities for all new lifeboats. To honor memories of loved ones or special moments.

Safehaven Marine have launched a new search and rescue craft ‘Von’ for the Faroe Islands.