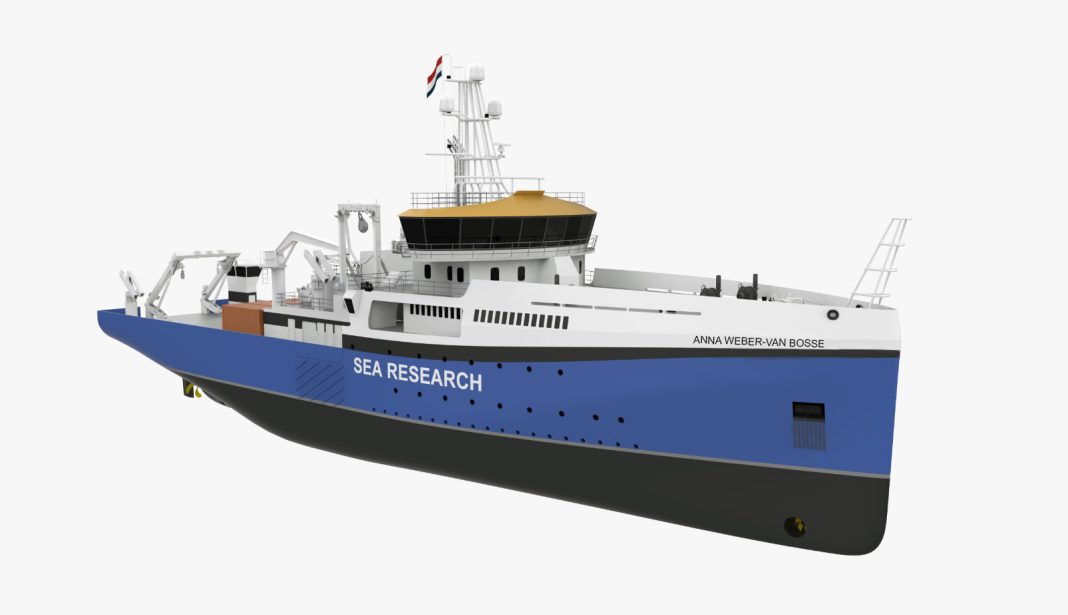 On 16 December 2022, the contract for the construction of the new Dutch ocean-going research vessel, the RV Anna Weber-van Bosse, was signed on Texel. After years of preparations, construction can now begin on this innovative, sustainable and unique vessel that will replace the 35-year-old RV Pelagia. For instance, the new ship will be prepared for the use of methanol and has the ability to work close to the edge of the sea ice in the Arctic and Antarctic, which is important given the rapid melting due to climate change. The flagship of the Dutch research fleet is named after Anna Weber-van Bosse, the Netherlands’ first female marine biologist to conduct research at sea.

Future-proof
“Compared to the current RV Pelagia, the RV Anna Weber-van Bosse will be equipped with much larger laboratories, more accommodations and more modern equipment”, says Han Dolman, Director of NIOZ.  “As we’re increasingly aware that the seas and oceans are fundamental to the natural systems on earth – systems that give us our food, energy and raw materials and that regulate our climate – it is vital for us to better understand trends and potential tipping points in marine processes. That knowledge will serve as a foundation for the sustainable use of oceans, and for climate adaptation and mitigation. This would not be possible without a modern research vessel.”

National marine research
The RV Anna Weber-van Bosse will be the largest new vessel in the national research fleet, and will be available in two years to all of the Netherlands’ marine researchers. The research fleet consists of three vessels managed by the National Marine Facilities (NMF) department of the NIOZ, which is part of the Dutch Research Council (NWO).

Marcel Levi, chair of the NWO Board, has this to say about the future vessel: “With the arrival of the ocean-going RV Anna Weber-van Bosse, the high-quality Dutch marine research community will have a modern, sustainable research vessel for many decades to come. The vessel, the crew and the facilitating organisations NIOZ and NMF offer the entire Dutch marine science community the facilities that are essential for oceanic research.”

NWO recently approved the definitive grant of the contract for this project to Spanish shipbuilder Astilleros Armon, which had emerged as the best option from the obligatory European tender based on price, technical specifications, sustainability, action plan, project organisation and innovation. Astilleros Armon is the party that best complements the Technical Specifications, which include a detailed inventory of all of the scientific, technical and functional requirements of all of the potential Dutch stakeholders, including the NMF and the crew of the RV Pelagia.

Named after female marine biologist
The flagship of the Dutch research fleet will be named after Anna Weber-van Bosse, the Netherlands’ first female marine biologist to conduct research at sea. At the turn of the 20th century, she made substantial contributions to the development of the marine sciences in the Netherlands, as indicated by her many publications, enormous algae collection and honourary doctorate from Utrecht University. One of her contributions was the report on her research into chalkweed and algae as a member of the Siboga expedition to the Dutch East Indies in 1899-1900. Read more about it in her biography.