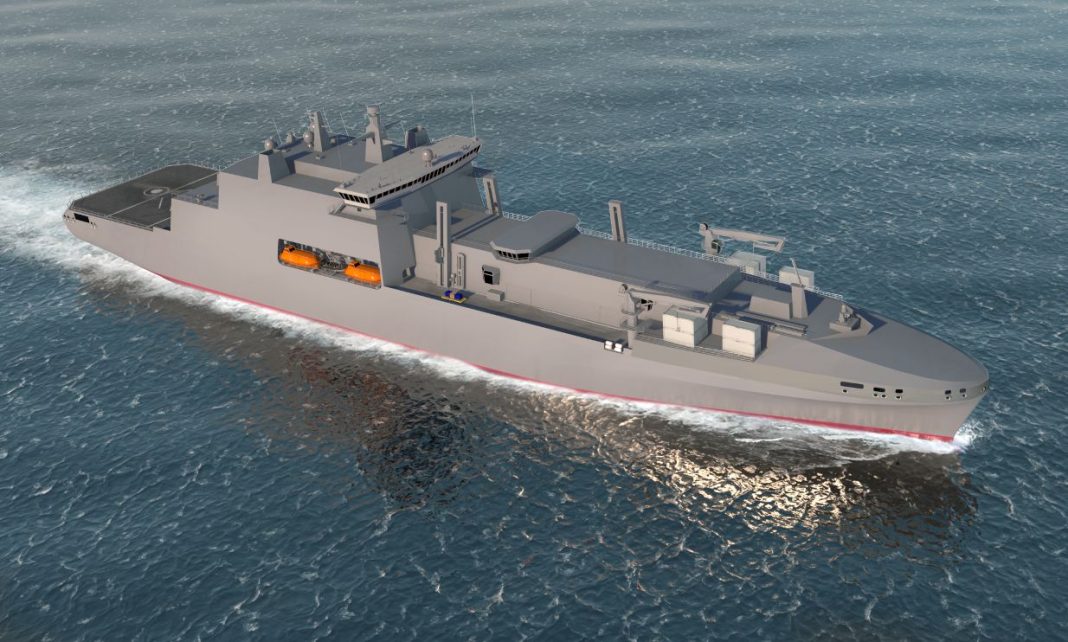 The Ministry of Defence has selected a preferred bidder to build support ships for the Royal Navy, with a contract that will create 1,200 UK shipyard jobs, hundreds of graduate and apprentice opportunities, and an expected 800 further jobs across the UK supply chain.

British-led Team Resolute, comprising BMT, Harland & Wolff and Navantia UK, has been appointed as the preferred bidder to deliver three crucial support ships to the Royal Fleet Auxiliary (RFA). Team Resolute will be awarded a £1.6 billion contract (before inflation) to manufacture the vessels providing munitions, stores and provisions to the Royal Navy’s aircraft carriers, destroyers and frigates deployed at sea, subject to HM Treasury and Ministerial approval.

Pledging to invest £77 million in shipyard infrastructure to support the British shipbuilding sector, the investment will create one of the most advanced yards in the UK, significant for future export and domestic shipbuilding and offshore opportunities.

The entire final assembly for all three ships will be completed at Harland & Wolff’s shipyard in Belfast, with the three 216m long vessels – each the length of two Premier League football pitches – built to Bath-based BMT’s entirely British design.

The majority of the blocks and modules for the ships will be constructed at Harland & Wolff’s facilities in Belfast and Appledore, with components to be manufactured in their other delivery centres in Methil and Arnish. This programme, which will also support a significant British-based supply chain, will be undertaken in collaboration with internationally renowned shipbuilder, Navantia. Build work will also take place at Navantia’s shipyard in Cadiz in Spain, in a collaboration that allows for key skills and technology transfer from a world-leading auxiliary shipbuilder.

“This is a welcome boost to the UK shipbuilding industry. By selecting Team Resolute, the Ministry of Defence has secured £77 million of investment into UK shipyards, creating around 2,000 UK jobs, and showcasing cutting-edge British design.

“Building on ambitions laid out in the National Shipbuilding Strategy, we are also bolstering technology transfer and key skills from a world-renowned shipbuilder, crucial in the modernisation of British shipyards.”

Delivering on ambitions to bolster UK shipbuilding as laid out in the National Shipbuilding Strategy Refresh, the contract will deliver significant capital investment in the UK while providing ships which are essential to the Carrier-led Maritime Strike Group.

“Team Resolute is proud to have been selected as preferred bidder to provide the Royal Fleet Auxiliary with three state-of-the-art, adaptable ships which will fulfil the Royal Navy’s needs while strengthening UK sovereign design and shipbuilding capability, as well as generating around £1.4 billion in national social and economic value.

“Team Resolute will be making a significant investment into the UK and help to level up UK Government defence spend across the whole Union. We will create high quality UK jobs, apprenticeships and four facilities across the UK which will have shipbuilding capabilities fit for the 21st century.”

The ships will be the second longest UK military vessels behind the two Queen Elizabeth-class aircraft carriers. They will have commonality with the RFA’s Tide class fleet tankers, also built to a British BMT design.

The majority of the three ships’ build will take place in the UK, and the contract will increase industrial productivity, develop the domestic supply chain and workforce while improving the industry’s environmental sustainability.

Designed to support Net Carbon Zero by the end of their 30-year service lives, the RFA vessels will be equipped with energy efficient technologies to reduce power demand and will have the capability to reduce their carbon intensity by adopting low-carbon, non-fossil fuels and future energy sources.

“FSS will deliver worldwide logistic and operational support to the Royal Navy, including the Maritime Strike Group on deployment.

“Significant investment in emerging shipyards across the UK will also strengthen and diversify our industrial base. Alongside our investment in the Type 26 and Type 31 frigate programmes, this breadth will be vital to grow and support a highly capable and modern Navy.”

Production is due to start in 2025 and all three support ships are expected to be operational by 2032. The manufacture contract is due to be awarded by DE&S by the first quarter of 2023, subject to completion of a successful preferred bidder stage and final approvals.