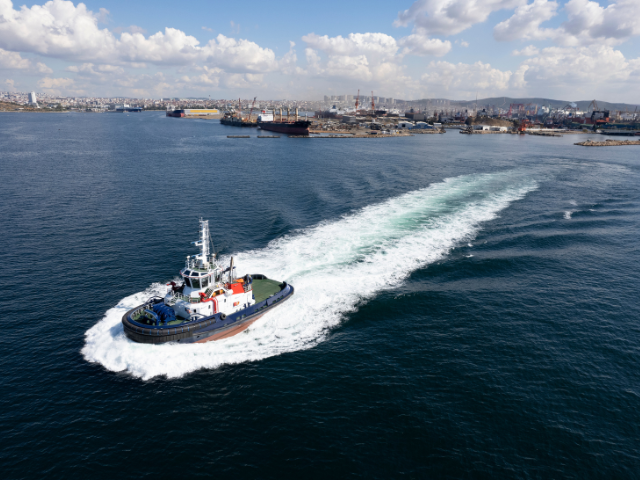 The Council’s third new tug is on her way to Orkney – a 3,500 nautical mile journey from Turkey that replicates those made by her sister ships, Odin of Scapa and Thor of Scapa in 2020.

The new 32-metre tug has been built by the same company – Sanmar Shipyards of Turkey – to the same design and specification as the previous two after a competitive tendering exercise.

Chair of Orkney Islands Council’s Development and Infrastructure Committee, David Dawson, said: “We are delighted to know that the third tug – Freyja of Scapa – is on route to her new home here at Scapa Flow.

“Sanmar have paid the Orkney vessels and those behind them the highest compliment by replicating the tug hull design in two further vessels they have also built and sold elsewhere. This further validates our own beliefs that these are first-class vessels, complete with modern standards of safety, stability and operational capability that now have a proven track record of working exceptionally well whatever the demands on them may be.

“The tugs continue to play a vital role at the heart of our harbour operations, helping us make the most of current and future marine business opportunities and maintain the service we’ve provided for the Flotta Terminal over many decades.”

Freyja of Scapa, as Odin and Thor before her, will travel through the Mediterranean, past Gibraltar, along the coast of Portugal, across the Bay of Biscay, through the English Channel and up the east coast of Britain, before crossing the Pentland Firth and heading into Scapa Flow. The journey is expected to take around 17 days.

Freyja of Scapa was built at Sanmar’s Tuzla Yard in Icmeler, Turkey.

The three new tugs replace the ageing fleet, which served the Council admirably for more than 30 years.

The Council’s Head of Marine Services, Transportation and Harbour Master, Jim Buck, said: “We are as delighted with the quality of the new tug as we were with the original two, which have been working hard in Scapa Flow and around Orkney since their arrival in October 2020 given the ongoing increased activity in our waters.

“The approval by Councillors for this third modern tug will ensure that we are able to move with the times and offer what we firmly believe is a first-class service to our clients.”

As per the previous vessels – the tug will sail to Orkney under the Turkish flag and name this being Kocacay III, then once in Orkney and accepted by OIC the name will be changed to Freyja of Scapa and put into the UK flag (registry).

Freyja of Scapa will be officially named at a later date.