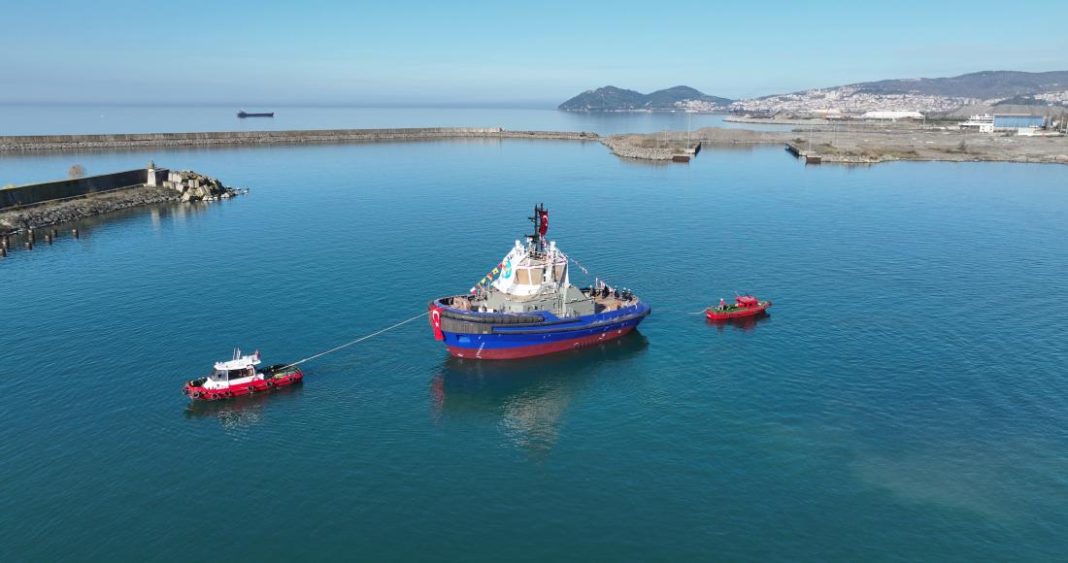 The keel laying ceremony for the escort capability Celtic  Treaty Tugboat with Irısh Mainport took place on May 2022.

The vessel is MED-A2850 RAstar 2800 series, designed by Canadian Naval Architects Robert Allan exclusively for Med Marine and the launch of the tug took place on 8th December.

Med Marine’s tugboat was chosen by Irish Mainport for its escort capacity and robustness as well as for its modern design which features efficient ship handling, coastal towing, general-purpose towing.

Vessel will be operated in Cork in order to meet the growing marine service requirements of Irish Mainport Holdings.

Vessel is named as CELTIC TREATY.

Med Marine’s Sales Manager, Melis UCUNCU comments on the launch of the Celtic Treaty: We are thrilled to build this lovely boat for Mainport and very happy to have them as partner ; prior to Celtic Treaty ,  we have already delivered them the Celtic Fergus a 24 m 50 tbp tugboat. Celtic Treaty will be joining the Fergus later in new year.

Irish Mainport Holding’s Fleet Director, Dermot Curtin comments on the launch of the Celtic Treaty: We are delighted to be back working with Med Marine on our latest project, the Celtic Treaty. This new build Tug will ultimately replace the Celtic Rebel on the Shannon Foynes Estuary in Ireland and shows our comminment to our clients as well as our continued satisfaction with the yard team in Turkey and Med Marine.

Med Marine is a leading Turkish shipbuilder and leading tugboat operator. The firm employs Eregli Shipyard, one of the largest shipyards in Turkey based on some 180.000 sqm with more than 30.000 sqm indoor areas to build state-of-the-art tugboats, workboats, offshore vessels and coated/Stainless Steel (STST) IMO II type chemical/oil tankers, either for its own operations or clients around the world. Med Marine has a very wide selection of state-of-the-art tug boat design portfolio and the shipyard is constantly being improved with advanced production standards by keeping up with latest health, safety and environmental regulations. Med Marine has successfully completed the construction and delivery of almost 200 projects, including tugboats, chemical/oil tankers, mooring and pilot boats.

The group specialises in ships agency services, provided nationwide, through partnerships around Ireland resulting in a single point of contact for all your Irish port calls. Mainport also offers Stevedoring services in Shannon-Foynes and the port of Cork. Each of the group companies is well established and can offer extensive local knowledge in each location giving a professional, flexible and efficient service.

The Mainport Group operates to the highest international standards, including those set by, Class and Flag State, ISM, ISPS, and ISO 9001.

The Sophie Germain: A Modern, Efficient and Eco-Friendly Cable Ship