A SUNNY RIDE ON THE ‘NEXANS AURORA’ SEA TRIAL 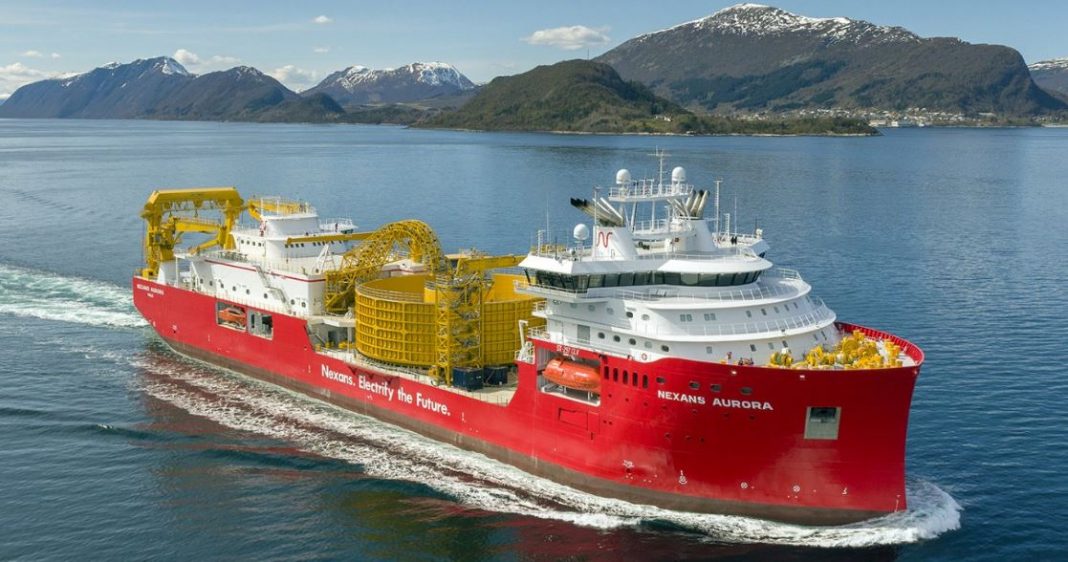 Snow-covered mountain tops, green hillsides and a bright sun on a blue sky make a perfect frame for the lady in red, the CLV vessel ‘Nexans Aurora’, on her sea trial. A sunny mood also characterizes the atmosphere on board the vessel.

Tore Haugen and Jørgen Fosse from Bergen Engines signed on this Monday. When interviewed after two days of sea trial, they responded ‘So far – so good’, and emphasized that most of the testing of the engines had been done before the trial, so their presence on board is more to be in a state of readiness. If nothing out of the ordinary happens, they can continue to enjoy the sun and the scenery.

A brief talk with Terje Vestad and Jørgen Toft from the thruster supplier Brunvoll, strengthens the initial impression. They had a quite hectic day Monday, which is quite natural when the thrusters are being tested. When this was checked out and fine, they commented that ‘things have gone well and according to plan’.

Some would argue that the most important function of a ship is the galley. Daniel and Ovar Hatløy are hired as stewards, and also they have pretty much the same feedback. “Everything works fine and keeps a high standard,” they said. When asking people on board about the food being served we get thumbs up in reply.

Nexans’ Technical Manager, Knut Flage, says that “blackouts are not uncommon on sea trials, but so far, we have experienced nothing of the kind on ‘Nexans Aurora’”. Knut explains that the shipyard, Ulstein Verft, has done a thorough job from the start, and the result of this is now experienced. “This way of working is not always the standard, many shipbuilding projects do not prioritize enough the testing and run throughs at the yard. And this often results in more complicated sea trials.”

The success of the sea trial so far is also a big thank you to the suppliers. “High quality components, delivery on time and the overall composition of the work being done has resulted in far less errors than is usual on sea trials like this. A lot of the hard work has been up to this point,” Knut says, “now, we get the opportunity to enjoy the view around us between the tests.”

“But still”, he explains, “there is always some excitement, when all the systems are tested together and over time. The sea trial will continue for a few more days, but at this point everything has run smoothly”.

“We are very pleased with the composition of the solution,” says Frode Beyer, who is Nexans’ Project Manager. He follows up by saying: “This vessel is sophisticated, yet conventional. She is designed for her tasks but using well tested components and solutions from quality suppliers”.

“Nexans is leading the charge of the energy transition by providing connected, sustainable and decarbonized energy. There is a lot at stake when a vessel like the ‘Nexans Aurora’ is undergoing operations for customers and ‘Nexans Aurora’ is tailormade for the risks we are involved in ,” says Frode Beyer.

He explains that Nexans is committed to receiving the vessel on the scheduled time and to the agreed quality. “We cannot afford uncertainty,” he says. “When electrifying regions and countries, Nexans must deliver 100% reliable solutions. Power failure is not an option”.

Knut adds: “This reflects the people we choose to work with. Our customers expect a lot from us, and this affects the decisions we need to take to figure out who we work with. Ulstein Verft has been a good match for us”.

“Even though we have managed this project through a worldwide pandemic, we have achieved every milestone,” says Frode. He continues by saying that the way Ulstein has taken all necessary precautions has been very valuable to Nexans. He sums up: “The way Ulstein has dealt with the Covid-19 situation is world-class. The policy implemented in the organization has been very rational. The challenge with Covid-19 has been taken seriously from day one at Ulstein”.

The sea trial will end in the beginning of week 19. Hans Karsten Voldsund from Ulstein Verft is the yard’s Project Manager. “It is a lot to think about, but I have very good help from the people around me,” says Hans Karsten. He is positive, although there are still many tests that need to be done. And, there is still work remaining at the yard before delivery in a few weeks.

“We need to complete the outfitting of the vessel, some paint jobs, everything needs to be cleaned up and look good for delivery. We will also run some tests on the A-frame and some of the winches to check the hydraulics and the functions on these systems”.