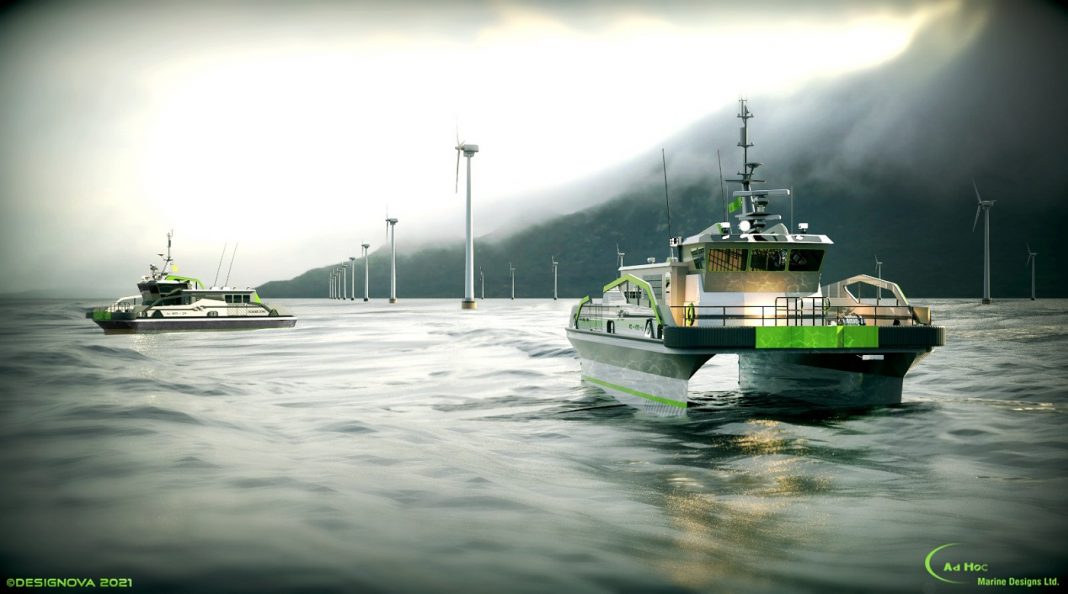 The 15m Faraday Class electric personnel transfer vessel (ePTV) is an all-electric 100% battery power vessel designed by Ad Hoc Marine Designs Ltd (AHMD). Having over 30years of experience in designing all manner of high speed vessels including all the naval architecture design of the previous range of CTV South Boats Catamarans built by Aluminium Marine Consultants (AMC),  AHMD is uniquely placed to draw on decades of knowledge and its extensive database of designs. The vessel is deigned to align with brining the future into today as well as the UK Govt.’s own vision for the future, with the phasing out of internal combustion engines (ICE) in the maritime sector from 2025, to be fully removed by 2030. Part of the future vision is the creation of a new style and livery to match this ambition. The Faraday Class ePTV styling and livery was crafted by DESIGNOVA to distinguish itself from the crowd. AHMD previously collaborated with DESIGNOVA when designing the 100m Stabilised Monohull Power Ark, for PowerX, utilising the creative flare of J. David Weiss at DESIGNOVA to provide their vision. The Power Ark is a vessel transporting energy via batteries, to and from the Windfarm.

The existing model of a fast CTV from port to the field which is being stretched to the limit by round 2 &3 windfarm going farther offshore is not sustainable when using an ICE for its power. The whole ‘model’ for the design and operation must change. There are far too many attempts to fit a square peg into a round hole – this is simply a case of denial. What energy company would continue to offer contracts to a company using ICE when its own modus operandi is to be 100% renewal and green? Thus the whole model requires a tectonic shift by changing how the vessel is designed and operated – this can only be achieved by looking forward into the future, and it is 100% electric. Revolutions start with a simple seed of thought, not a flurry of show and bravado.

The Faraday Class fulfils this role by using Sterling Batteries, the current state of the art. The power density of batteries is well known to be circa 50 to 1 when compared to an ICE, but this should not be seen as a barrier, but an opportunity. The opportunity to change the narrative from ICE to electric, knowing that with each passing year this power density will slowly reduce, thereby making an all-electric not only possible, by becoming the norm, sooner rather than later. Rather like the Moore’s Law of transistors.

The Faraday Class ePTV is one of 4 daughter vessels that are stowed on the deck of its Mothership. Overnight the batteries are charged and/or replaced. When duty calls the ePTV is lifted off the Mothership and launched into the field. The ePTV then has around 4-5hours of usable power, depending upon its duties. When the charge is low it is now possible to recharge directly from the tower, or simply return to the Mothership where the ePTV docks at the stern allowing for the spent batteries to be lifted and replaced with fully charged batteries within minutes. The Mothership is capable of creating its own electricity from its own wind generators where it is not possible to connect with the windfarm cables. It also carries Diesel / alternative fuel generators when the wind doesn’t blow and for redundancy/emergency back-up.

The Mothership is the hotel and charging station and does not transfer technicians to the tower. The Mothership merely loiters around the area of operation for the day. This increases the level of safety for the technicians when compared to existing SOV operations. In an emergency situation, such as a lightning storm, a maximum of 12 technicians (on the tower) can quickly disembark back to the ePTV. Whereas attempting the same on a SOV with up to 60 technicians, is not so straightforward.

This is not merely a future brainstorming nice idea, this is now a reality.

The Faraday Class ePTV available exclusively from AMC on the Isle of Wight with AHMD/AMC being part of a Consortium that won the clean marine Department of Transport Grant. The other members of this are: MJR power, Turbulent Marine Simulations, Stirling Batteries and the ORE Catapult. This is currently being engineered by all parties in the consortium ready for the next chapter. The next generation … is here now, today.

The Project Barracuda is part of the Clean Maritime Demonstration Competition, funded by the Department for Transport and delivered in partnership with Innovate UK.

Announced in March 2020, and part of the Prime Minister’s Ten Point Plan to position the UK at the forefront of green shipbuilding and maritime technology, the Clean Maritime Demonstration Competition is a £20m investment from government alongside a further c.£10mfrom industry to reduce emissions from the maritime sector. The programme is supporting 55 projects across the UK, including projects in Scotland, Northern Ireland and from the South West to the North East of England. As set out in the Clean Maritime Plan (2019), Government funding has been used to support early stage research relating to clean maritime. The programme will be used to support the research, design and development of zero emission technology and infrastructure solutions for maritime and to accelerate decarbonisation in the sector.*

In addition, all this new technology and innovative engineering can also be used to recycle the current fleet of CTVs. Once the Faraday Class is up and running in service, it provides a benchmark of how best to re-engineer and repower old ICE design CTVs using this modular based ESS power source. Thereby greening the existing fleet from its CO2 polluting ICE engines, to a 100% green and renewable power source. Thus, the long term objective of the UK Govt. can be satisfied.

The Faraday Class serves as a notice to new Windfarms that are sprouting up around the world. There is no need to learn the harsh lessons of the UK/EU Windfarm industry by adopting old designs and technology into a new world. Side step the learning curve and go directly electric. New Windfarms in Japan for example, they are located circa 10kms offshore. This short distance is ideal for the use of battery powered ePTVs. There seems little point in using an old design with an ICE for such operations. Looking at the sites off the Eastern seaboard in the US… the whole Faraday Class operational model of Mother/daughter vessel makes sense, given the environmental concerns in may locations; this nearly side steps all these issues.