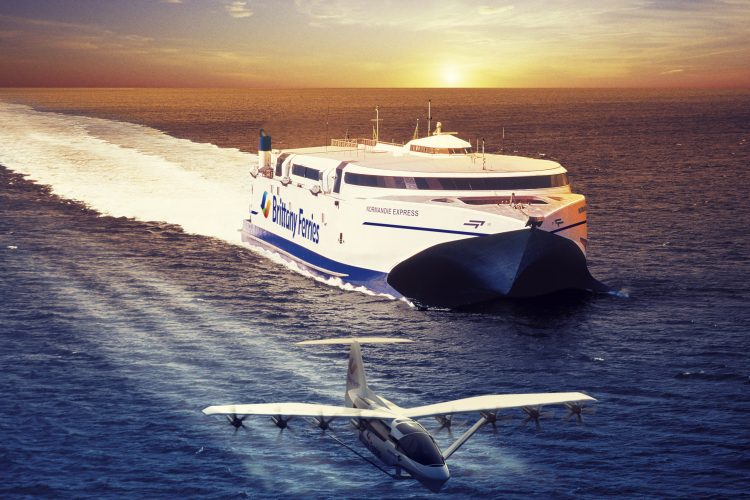 Brittany Ferries is exploring the potential for a new high-speed, sustainable and more efficient form of ferry travel called a seaglider. The concept, an all-electric, wing-in-ground effect vehicle (WIG), is under development in the United States through Boston-based start-up REGENT (Regional Electric Ground Effect Nautical Transport).

Brittany Ferries has signed a letter of intent which could see seagliders with a 50-150 passenger capacity sailing between the UK and France by 2028. REGENT expects the first commercial passengers to travel on smaller electric craft by 2025.

Seagliders combine the convenience of passenger ferries with the comfort of hydrofoils, the aerodynamic efficiency of hovercraft and the speed of aircraft. With the potential to connect existing ferry ports, the craft are expected to fly at speeds of up to 180 mph – six times faster than conventional ferries – with a battery-powered range of 180 miles.

The voyage from Portsmouth to Cherbourg, for example, could be covered in as little as 40 minutes.

They work by harnessing a concept well-known to pilots – ground effect. This is the cushion created by high-pressure air trapped between wings and the ground or water while flying at low altitude. Seagliders are therefore akin to a hovercraft with wings, rather than a skirt.

Following departure from port, the craft rises on foils insulating passengers from wave discomfort. In open waters, it takes off, riding the air cushion all the way to its destination. Wing-mounted propellors provide the thrust to take to the air at low speeds,  while electric motors regulate air flow over wings while riding the air cushion.

Energy transition is a priority for forward-looking companies like Brittany Ferries and is key to its recovery post-Covid. Based in Roscoff France, the company has already invested in the delivery of two new LNG (liquefied natural gas) ships for delivery in 2022 and 2023 called Salamanca and Santoña*.

Its partnership with REGENT goes one step further. It is a visionary project which offers an exciting glimpse into the future, the kind of vehicle never before seen in Franco-British waters.  Brittany Ferries is contributing to development discussions, as the company has a track record in operating fast ferries such as Normandie Express (currently chartered to Condor Ferries).

“Seaglider is an attractive and exciting concept and we look forward to working with REGENT in the months and years to come,” said Frédéric Pouget, ports and operations director for Brittany Ferries. “We are particularly pleased to contribute now because it means we can bring real-world challenges and potential applications into the company’s thinking at an early stage. We hope this may help bring commercial success in the years that follow. Who knows; this could be the birth of ferries that fly across the Channel.”

Billy Thalheimer, co-founder and CEO of REGENT, added “REGENT is excited to partner with Brittany Ferries to bring the future of maritime transportation to market.  Brittany Ferries offers world-class operational experience which will help REGENT ensure that our seagliders will be the most convenient and comfortable form of cross-Channel travel.”

REGENT is working on several different sizes of passenger-carrying seagliders, all of which operate on the same principle. Operating a few meters above the water’s surface, they combine the high speed of an aeroplane with the low operating cost of a ship. It has the potential to serve routes of up to 180 miles with existing battery technology, and routes up to 500 miles with next-generation batteries.

Both Brittany Ferries and REGENT understand that many technological, practical and regulatory milestones lie ahead. However, both companies say that caution should not stand as an impediment to the development of a promising concept that already has a history in military applications and smaller leisure craft operating around the world. Both companies look forward to the promise of cross-channel services, reduced emissions, and seagliders becoming commonplace.

For like electric cars, seagliders automatically become greener as more source electricity is generated from renewable sources. And thanks to the inherent efficiency of travelling above water, speed need not be sacrificed to help lower emissions, slow-steaming being one of the solutions proposed for traditional sea-going vehicles to limit environmental footprint.

*investment made in years before current Covid-19 crisis

In 1967 a farmer from Finistère in Brittany, Alexis Gourvennec, succeeded in bringing together a variety of organisations from the region to embark on an ambitious project: the aim was to open up the region, to improve its infrastructure and to enrich its people by turning to traditional partners such as Ireland and the UK.

In 1972 BAI (Brittany-England-Ireland) was born. The first cross-Channel link was inaugurated in January 1973, when a converted Israeli tank-carrier called Kerisnel left the port of Roscoff for Plymouth carrying trucks loaded with Breton vegetables such as cauliflowers and artichokes. The story therefore begins on 2 January 1973, 24 hours after Great Britain’s entry into the Common Market (EEC). From these humble beginnings however Brittany Ferries as the company was re-named quickly opened up to passenger transport, then became a tour operator.

Today, Brittany Ferries has established itself as the national leader in French maritime transport: an atypical leader, under private ownership, still owned by a Breton agricultural cooperative. Eighty five percent of the company’s passengers are British.