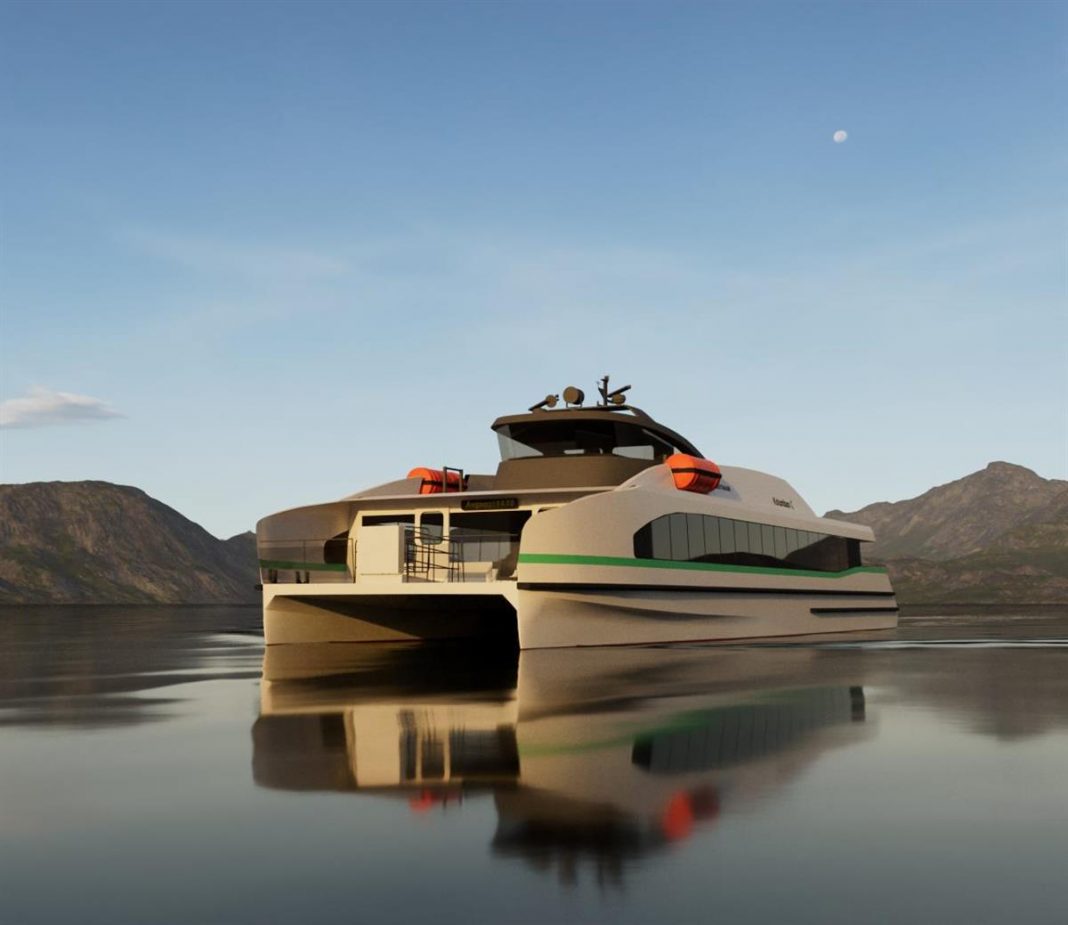 Thursday 10 June was a major event at Fjellstrand shipyard in Hardanger and for the Norwegian maritime industry.

The catamaran has room for approx. 150 passengers, and will be 31 meters long and nine meters wide. It will be equipped with two electric motors and a battery with a capacity of 1.5MWh and a charging power of over 2MW. This will be the world’s first fully electric speedboat classified according to the international HSC code (High-Speed ​​Crafts). As the TrAM project’s demo vessel, the boat will enter a route between Stavanger, the city islands and Hommersåk in the spring of 2022. The vessel is designed for a service speed of 23 knots and has been given the appropriate name Medstraum .

The TrAM project was initiated by the business cluster NCE Maritime CleanTech, and is coordinated by Columbus.

A goal of zero emissions is an important driver in Columbus’ work to reduce the footprint of the company’s public transport services. Rogaland County Municipality has contributed NOK 68 million to co-finance the vessel.

– Rogaland County Municipality has a strategy for a drastic reduction of emissions for all ferry routes in the county. The TrAM project shows what is possible for the public transport of the future – with zero emissions to the environment, says county mayor of Rogaland, Marianne Chesak.

The TrAM project also includes the development of two replicator vessels, one for passenger transport on the Thames in London and one for inland waterways in Belgium.

The project partners have worked hard to optimize the design of the Medstraum and the hull’s hydrodynamic properties. Both the hull and the superstructure will be built in aluminum, which in addition to low weight provides lower energy consumption. Aluminum also contributes positively in a circular-economy perspective, as it is easy to recycle.

TrAM is also innovative in simplifying the design and production of future vessels, using Fraunhofer IEM’s experience with modular production methods from the automotive and aerospace industries. With the help of modularisation, the project aims to reduce the production costs and engineering time for electric speedboats by 25% and 70%, respectively, which will significantly improve the competitiveness of such vessels.

Modularization in the design phase involves defining components that can be included in standardized modules, which in turn can be reused across vessels and operating profiles. The fact that the same modules can be used across vessels provides opportunities for faster design and production. Together, increased automation, more efficient use of materials and shorter design and construction time represent a new chapter in shipbuilding, while at the same time increasing the competitiveness of the industry.

Renewal of waterways as a transport artery

Hege Økland, CEO of NCE Maritime CleanTech, emphasizes that electric speedboats are very relevant for cities all over the world.

– Streamlined production is a very important factor, as it increases the attractiveness of such vessels in terms of costs and footprint. In addition to the fact that the vessels have zero emissions, they can also contribute to the renewed use of inland waterways in Europe for freight and passenger transport, says Økland.

The TrAM project started in 2018 and has been awarded close to NOK 120 million from the EU’s research and innovation program Horizon 2020. This is one of the largest amounts ever awarded to a single project, and around 70 percent of the money goes to Norwegian partners. The project has also received support from the Research Council of Norway for dissemination activities.

Facts about the Tram project:

The TrAM consortium comprises 13 European partners and is coordinated by Rogaland County Municipality (NO) through the independent mobility provider Columbus (Norway), which will also own and operate the demo vessel. Medstraumis designed and will be built by the shipyard Fjellstrand (Norway) with energy system supplied by Wärtsilä (Norway) and propulsion system supplied by Servogear (Norway). Vessel modules shall be supplied by Leirvik (Norway) with aluminum supplied by Hydro Extrusion Norway (Norway). Fraunhofer (Germany) is leading the work of adapting modularity models from the automotive and aerospace industries to the maritime industry and smart urban integration.

University of Strathclyde (UK), National Technical University of Athens (Greece) and HSVA (Germany) are consortium partners responsible for R&D, simulation and testing. Communication and dissemination activities are provided by NCE Maritime CleanTech (Norway) and the owners of the replicator vessels are Uber Boat by Thames Clippers (UK) and De Vlamsee Waterveg NV (Belgium).