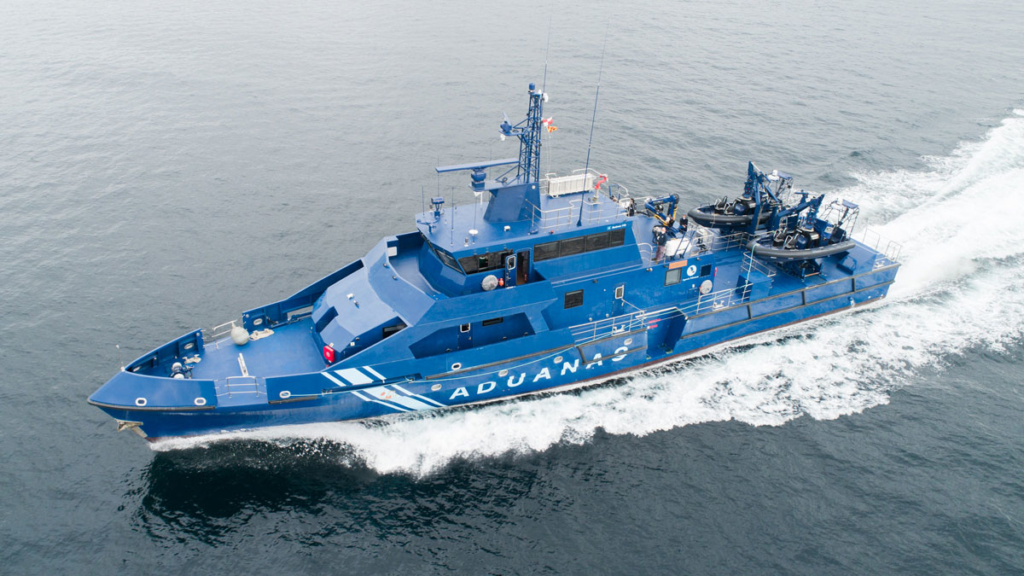 Rodman Polyships SAU, a Rodman Group shipyard specialized in the construction of all types of GRP (Fiberglass Reinforced Polyester) vessels, ends this April with a new delivery of the vessel to the State Tax Administration Agency. It is the new Rodman 138, the longest high-altitude patrol boat in Polyester with Fiberglass that has been built in Europe and probably worldwide, so far, which is already part of the Customs Surveillance fleet to carry out missions in altar mar and provide coastal patrol service, covering large surveillance areas.

The construction of this model has been a milestone for the shipyard, allowing it to create a new segment, that of vessels up to 45 meters in length built in GRP, which will open the doors to the international level, being pioneers and leaders in it.

The Rodman Polyships facilities in Moaña hosted the official handover ceremony that was supported by numerous national, regional and local authorities, including the general director of the Tax Agency, Jesús Gascón; the government delegate in Galicia, José Manuel Miñones; the second vice president and councilor for Economy, Business and Innovation of the Xunta de Galicia, Francisco Conde; the mayor of Moaña, Leticia Santos, and the mayor of Vigo, Abel Caballero; representatives of the Customs Department and the AEAT Special Delegation as well as State Security Forces and Corps.

Patronized by the Secretary of State for Finance, Inés Bardón, who also participated in the inauguration ceremony, this new model was baptized as ‘Condor’, thus taking its name from the 80s and 90s when under this name a series of camouflaged patrols They carried out their service in a particularly intense period of the fight against drug trafficking in Spain.

“From Rodman we are proud to have manufactured one of the largest boats built in the world in Polyester Reinforced with Fiberglass”, as stated in his speech by the president of the shipyard, Manuel Rodríguez, also stating that “the construction of the Condor, pride of this shipyard has been a milestone for this shipyard, allowing us to create a new segment, growing internationally ”.

With a total length of 43 meters and a maximum speed of 26 knots, it has been created by the shipyard’s design, development and engineering teams, perfectly combining high performance, reliability, build quality and navigation characteristics. In addition, it has been equipped with a new stabilizer system to reduce the roll and pitch of the ship both at rest and in navigation, in addition to improving its performance, fuel economy and safer operation in extreme conditions. The propulsion is made up of two four-stroke Caterpillar C18 diesel engines of 1,500 kW of power each and Teignbridge C-FOIL propellers

With capacity for a crew of 18 people, which will be accommodated in eight independent cabins, and with a range of more than 2,000 nautical miles, which doubles that of a conventional patrol boat, the new Rodman 138 offers great versatility in naval combat operations. against drug trafficking carried out by Customs Surveillance since it will be able to serve the bases in coastal patrol covering wide areas of the coast, but it will also have the capacity to carry out oceanic interceptions.

To do this, for a few months it will be able to be seen in operation in the Vigo area, while guaranteeing its full operational conditions, subsequently being used for different reference bases during its useful life, depending on the service needs at all times.

The new Rodman 138 Cóndor is also equipped with a shipwrecked collection system that includes the installation of collection areas close to the water level to facilitate rescue, which makes it operational to participate in humanitarian emergencies that are experienced in the Spanish coasts.

Likewise, a powerful fire-fighting water cannon has also been incorporated in its manufacture to support other vessels in the event that they suffer an accident at sea.

The achievement and final execution of this vessel consolidates Rodman’s position as one of the world leaders in the construction of professional GRP vessels. All the professional boats and pleasure boats, built by the shipyard, are recognized and highly valued by the most demanding shipowners, as well as by organizations and government administrations around the world.