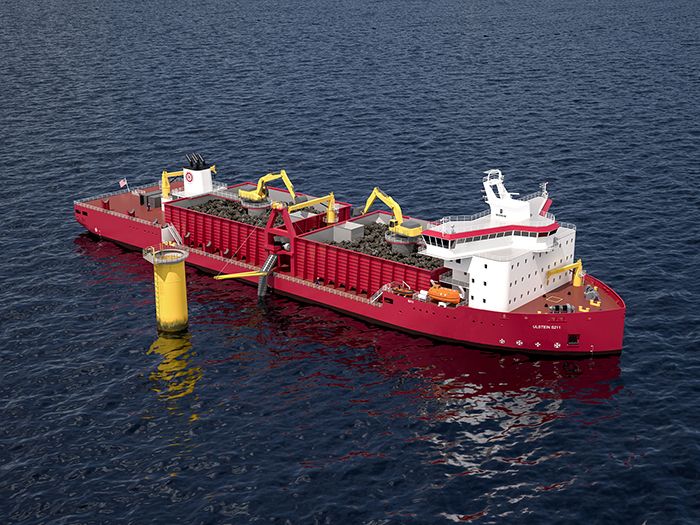 “Over the past several years, we have made a conscious effort to pivot toward a more diversified order backlog in an attempt to grow the Company’s profitability,” said Steinar Nerbovik, President and CEO, Philly Shipyard.

“Philly Shipyard has a long-standing position as the leading U.S. commercial shipyard for tankers and container ships, and we are making inroads into government projects – both new builds and repairs. This win now carves a path into the expanding offshore wind market. This contract is proof that we are executing on our vision and diversifying our market opportunities.”

The basic design is by Ulstein, a leading Norwegian/Dutch designer of offshore wind vessels. The Subsea Rock Installation Vessel is designed to carry up to 20,000 MT of rock and shall transport and strategically deposit these rocks to the ocean bottom, laying a foundation for the monopiles which serve as the prevailing support structure for offshore wind turbines. The ship will have an overall length of 140.5 meters (461 feet), a breadth of 34.1 meters (112 feet), and crew accommodations for 45 people.

The owner will supply the rock placement system and other mission equipment. Delivery for the first vessel is expected in Q4 2024 with the second (if awarded) being delivered in Q4 2025.

“Philly Shipyard is proud to contribute to the delivery of a vessel which will be essential in achieving the nation’s ambitious offshore wind targets. It is monumental for our shipyard to win this contract for Great Lakes,” said Thomas Grunwald, Vice President and lead manager of U.S. offshore wind strategy and business development at Philly Shipyard.

Philly Shipyard, Inc. (PSI) is a leading U.S. shipbuilder that is presently pursuing a mix of commercial and government work. It possesses a state-of-the-art shipbuilding facility and has earned a reputation as a preferred provider of oceangoing merchant vessels with a track record of delivering quality ships, having delivered around 50% of all large ocean-going Jones Act commercial ships since 2000.  PSI is the sole operating subsidiary of Philly Shipyard ASA. Philly Shipyard ASA is listed on the Oslo Stock Exchange (OSE: PHLY) and is majority-owned by Aker Capital AS, which in turn is wholly-owned by Aker ASA (Aker). Aker is an industrial investment company that exercises active ownership to create value. Aker has ownership interests in oil and gas, renewable energy and green technologies, maritime assets, marine biotechnology and industrial software, and its portfolio includes companies like Aker BP, Aker Horizons, Aker BioMarine, Cognite, and Aker Solutions.