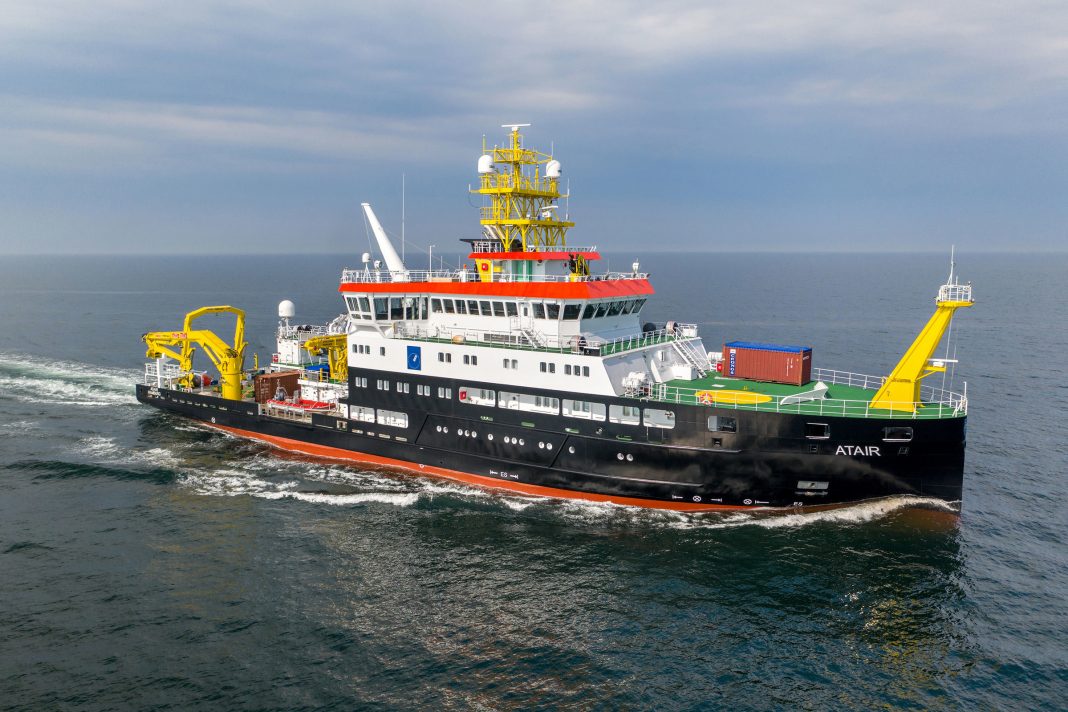 The Federal Maritime and Hydrographic Agency (BSH) today accepted the surveying, wreck search and research vessel (VWFS) ATAIR and took it over from the Fassmer shipyard. As the largest and most modern ship, it will be the flagship of the BSH fleet and at the same time the first sea-going government ship with LNG propulsion. The first monitoring trip is to take place in October 2020 on the North Sea. Due to the increased risk of infection with COVID-19, the ceremonial commissioning is not planned until spring 2021.

The crew of the ATAIR will use the next few months to design and train the work processes on board and to get to know the handling of the instruments for surveying and wreck search as well as the use of the maritime technologies on board. The necessary workflows for the monitoring trips are tested together with the scientists.

In the German exclusive economic zone (EEZ), in individual cases also in the coastal seas, the North Sea and the Baltic Sea, the ATAIR is used for surveying and wreck search as well as the examination of sediments and the water column. The testing of navigation equipment for shipping is also one of the tasks. ATAIR will measure ship emissions with a mobile station and thus make a contribution to the stationary ship emissions measurement network that is currently being set up on the German North and Baltic Sea coasts. The ATAIR will also be used in the context of the preliminary investigations of areas for offshore wind energy.

The ship has a diesel-gas-electric propulsion concept. The electricity for the electric propulsion and maneuvering equipment is generated by two dual-fuel engines, one of which is operated exclusively with gas. Another diesel engine is provided as redundancy if the gas supply fails or the LNG bunker supply is not guaranteed.

By using the currently most environmentally friendly marine fuel LNG (Liquefied Natural Gas), the emission of sulfur dioxide is reduced by 90 percent and carbon dioxide by 20 percent. Fine dust hardly occurs at all.

With a 130 m³ LNG tank, the ship can run on LNG alone for ten days. The second dual-fuel engine, which is also intended for diesel operation, and the diesel engine are equipped with modern exhaust gas aftertreatment and a soot particle filter in accordance with IMO Tier III. For diesel operation, which is also possible, only the highest quality marine gas oil with a sulfur content of less than 0.1% is used.

The new ATAIR is the first German research ship ever to meet the DNV GL “Silent R” requirements. They define the very low maximum permissible underwater sound level. This simultaneously protects the marine environment and ensures optimal conditions for scientific work on board. Since the VWFS ATAIR has a large number of hydroacoustic devices, including, for example, a single beam echo sounder, a multibeam echo sounder, a subbottom profiler, a side-scan sonar and a USBL underwater location system, the requirements for the underwater sound level are of the ship in order to exclude acoustic interference from the ship’s own noise.

The ATAIR is the first survey, wreck search and research ship with a dynamic positioning system. With just one joystick, the ship can be maneuvered or automatically held in position. The location accuracy is about 1.5 meters. This makes surveying and wreck search as well as the station work for sampling considerably easier and makes work safer.

The scientists have three laboratories at their disposal, which can be supplemented by another five laboratory containers if necessary. In addition, there is complete diving equipment with diving pressure chamber and pure air breathing compressor. Two ten-meter-long survey boats are provided for measuring shallow water.

The 18 crew members and up to 15 scientists who can be embarked have only single chambers at their disposal, each with its own wet room, state-of-the-art infotainment systems, sauna and fitness room. The ship thus meets the requirements placed on the equipment of the rooms for the crew members in merchant shipping.

The Federal Maritime and Hydrographic Agency (BSH) is the central maritime authority in Germany. Almost 1,000 employees in around 100 professions deal with tasks in maritime shipping, oceanography, nautical hydrography, offshore wind energy and administration. Five of its own survey, wreck search and research vessels operate in the German exclusive economic zone of the North and Baltic Seas. The BSH works internationally in more than 12 organizations and around 200 committees based there, among other things in the development of international agreements. The BSH is a higher federal authority and departmental research institution in the business area of ​​the Federal Ministry of Transport and Digital Infrastructure with offices in Hamburg and Rostock.