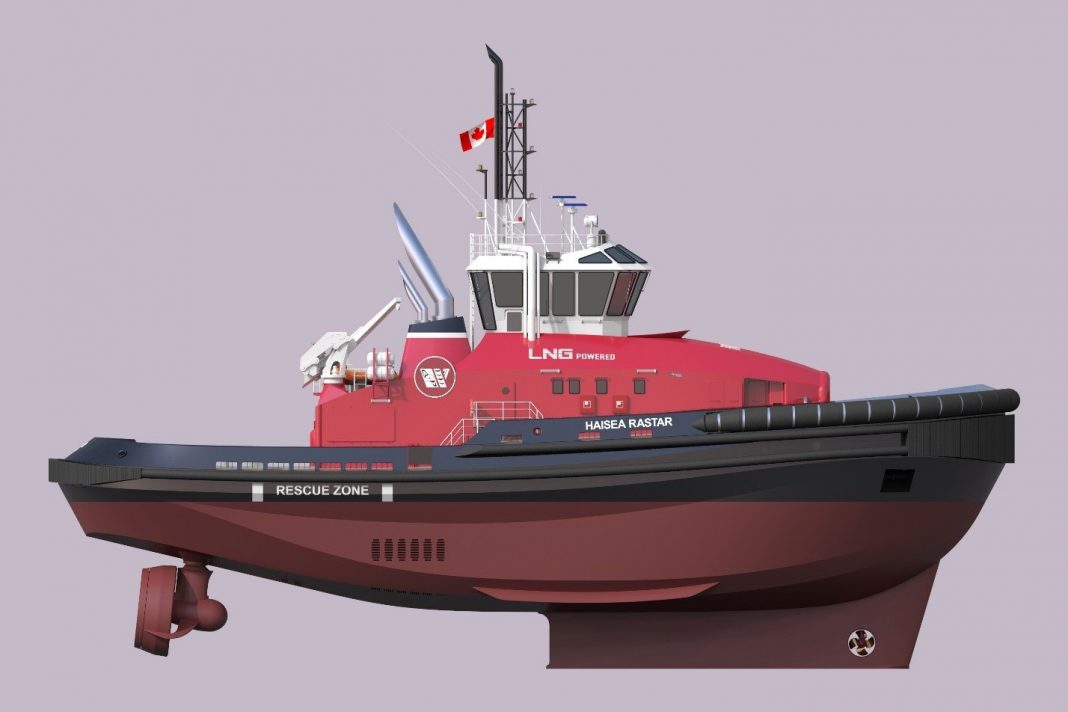 At LNG Canada, we’re committed to protecting the environment in which we operate. That means looking after both land and sea, and relying on local knowledge, cutting-edge technologies and innovation.

We’re proud to be working with local First Nations and companies who know the B.C. coast better than anyone. And we’re very excited about a unique partnership formed between the Haisla Nation and North Vancouver-based Seaspan ULC.

Majority-owned by the Haisla Nation, the new venture is called HaiSea Marine, which has a major contract with LNG Canada to build and operate escort tugs and harbor tugs required for our export facility in Kitimat.

With the agreement, various marine and land-based positions will be created, providing long-term employment to community members interested in a maritime career.

HaiSea Marine will provide ship-assist and escort services to LNG carriers navigating Douglas Channel and approaches in Kitimat Harbour. The neighbouring Gitxaala Nation and Gitga’at Nation will also benefit from the project.

What will make these vessels so special? Using battery-electric power and natural gas instead of diesel fuel, they’ll form one of the greenest tug fleets ever assembled.

At 28 metres in length, with approximately 70 tonnes bollard pull and 5240 kWh of battery capacity each, the first-of-class ElectRA 2800 battery-electric harbour tugs will perform the majority of their ship-berthing and unberthing missions on battery power. Bollard pull is primarily used for measuring the strength of tugboats, with most commercial harbour tugs having around 60 to 65 tonnes-force.

With ample clean hydroelectric power available in Kitimat, the harbour tugs will be able to recharge from dedicated shore charging facilities at their berths between jobs, effectively reducing emissions to near-zero. Because of their battery propulsion, they are also expected to be exceptionally quiet, both onboard and underwater.

The larger RAstar 4000 DF vessels will be the most powerful Azimuth Stern Drive (ASD) escort tugs on Canada’s west coast, and will rank among the world’s highest-performing escort tugs.

At 40 metres in length (roughly half the length of a football field) and with over 95 tonnes of bollard pull, they will generate indirect forces of approximately 200 tonnes. ASD tugs are equipped with two stern engines capable of generating a 360°, all-directional propulsion force.

The RAstar 4000 DF escort tugs will perform the majority of their missions using natural gas as their primary fuel. This allows major emissions reductions compared to conventional diesel tugs of the same power, in compliance with the most stringent emissions standards in the international marine industry. In addition to these environmental benchmarks, the escort tugs will be capable of pollution response/oil spill recovery, fire fighting of marine terminal fires, person overboard response, and emergency towage of vessels.

As a fleet, the new escort and harbour tugs are expected to reduce carbon dioxide emissions by up to 10,000 tonnes per annum compared to diesel-powered alternatives, with major reductions of nitrogen oxides, sulphur oxides, carbon monoxide, and particulate matter as well. In addition, all of the new tugs will be equipped with the external fire-fighting capability of 2,400 m3/hr (pumping enough water to fill one Olympic-sized swimming pool every hour).

“As majority owner of HaiSea Marine, we’re excited about the opportunities Haisla members will have working locally in the marine industry,” says Crystal Smith, Chief Councillor of the Haisla Nation. “It’s extremely important to us that aside from being one of the most powerful tug fleets on the west coast, it will also be one of the greenest ever assembled, anywhere.”

HaiSea’s Senior Project Manager, Captain Jordan Pechie, says the new partnership is a perfect fit. “Seaspan and the Haisla have hundreds of years of combined experience in these waterways,” he notes. “Our mandate is to operate at the highest level of safety and environmental standards, which will allow this legacy to thrive for generations to come.”

RAL President and CEO Mike Fitzpatrick also welcomes the opportunity to work with the Haisla Nation, noting that his firm already has a long-standing relationship with Seaspan. “We value highly the many quality shipyards with whom we have forged close working relationships over many years, and who have helped immeasurably to demonstrate the quality of our brand,” he says.

The new tugs will arrive well in time for LNG Canada’s first cargo at mid-decade.