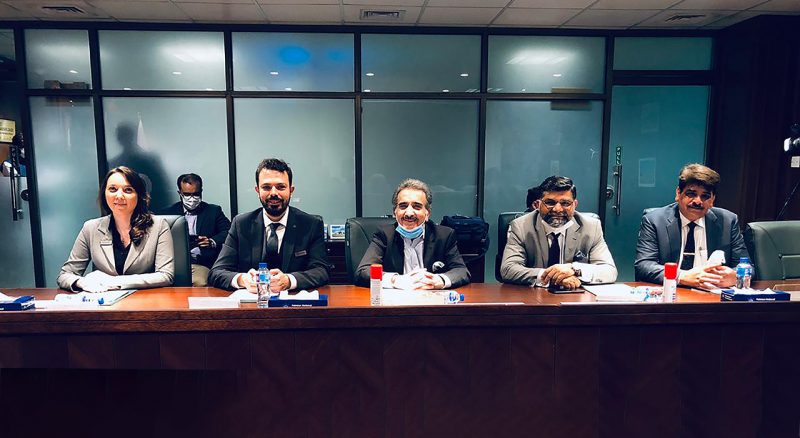 Sanmar Shipyards has signed six vessel contracts together totalling US$33.46 million with the Port Qasim Authority (PQA) in Pakistan for four high-performance state-of-the-art tugboats and two pilot boats. The tugs are scheduled to be delivered in 12 months and the pilot boats in 10.

The contracts were awarded following a hard-fought international tendering process during which Sanmar championed its new technologically-advanced Kocacay range of powerful and efficient escort and harbour tugs, based on the exclusive-to-Sanmar RAstar 3200SX design from Canada-based naval architects Robert Allan Ltd.

The Sanmar Kocacay class tugs, designed in close co-operation with the Turkish tug builder and operator, and boast a unique sponsoned hull form, proven to provide significantly enhanced escort towing performance. Escort forces are enhanced by the effects of the sponsons as well as by the prominent foil-shaped escort skeg.

Three of the 32m x 13m x 5.6m high-powered LNG compatible tugs will have an impressive 75 tonnes of bollard pull (BP) ahead and astern, while the fourth will have an even greater BP of 85 tonnes.

The first two tugs in the series, called Thor of Scapa and Odin of Scapa by their new owners, were delivered to the Orkney Islands Council in the UK last year. They are being used for ship-handling, towing, escort and emergency response duties and have been purposely designed with a shallower draught than most other tugs of similar size to ensure greater operational flexibility even with the depth limitations in some of the piers within Scapa Flow.

The contracts with PQA for the ultra-modern tugs and two 20m pilot boats capable of 20 knots, were signed at a ceremony at the Ministry of Maritime office in Islamabad on 29 March 2021. It was witnessed by the Federal Minister for Maritime Affairs Syed Ali Haider Zaidi and Turkish Ambassador Ihsan Mustafa Yardakul. Commercial Projects Manager Ozge Abanuz and Procurement Manager Hakan Tunc represented Sanmar.

Afterwards PQA organised a celebration dinner, which was also attended by the Federal Minister for Maritime Affairs Syed Ali Haider Zaidi and his wife, along with Turkish Ambassador Ihsan Mustafa Yurdakul and Sanmar representatives.

The Minister invited Sanmar to build a shipyard in Pakistan, share its expertise and technology, and benefit from the local skilled and relatively low-cost workforce.

Ali Gurun, Vice President of Sanmar, said: “Sanmar has been delivering tugs to Pakistan since year 2000. We have tugs in KPT and PQA ports. However, this tender was one of the most challenging one due to tough competition. Our designers Robert Allan Ltd and supplier Kongsberg Marine have worked closely with Sanmar engineers to deliver best performance solution for PQA. We have worked hard and we deserved it.”